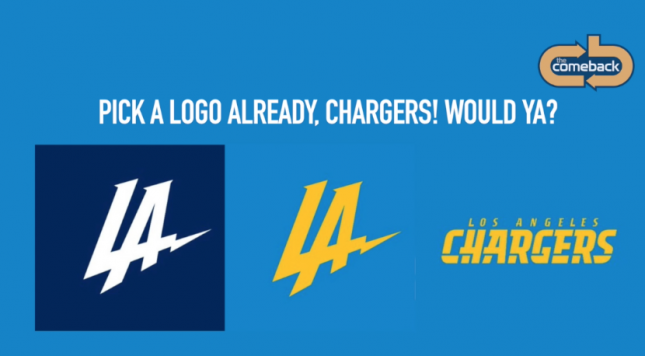 The Chargers may have moved from San Diego to Los Angeles (or more technically, Carson), but it looks like their games won’t be moving from the San Diego airwaves. Despite the anger towards the team from many locals, to the extent of even moving companies refusing to help them relocate, KFMB Channel 8 (the local CBS affiliate) president and general manager Alberto Mier y Teran (who took that job this past February) told Tom Krasovic of The San Diego Union-Tribune he expects that his station will still air plenty of Chargers’ games in 2017:

“We’re going to be carrying a lot of Chargers games this year,” said the GM, citing recent talks within the company.

No longer required to air Bolts telecasts in San Diego, it’ll be up to CBS corporate executives to pick which NFL games will air on KFMB. “The local station doesn’t have any say,” Mier y Teran said.

The GM said San Diegans should expect the telecasts to remain on KFMB-TV because even Los Angeles Chargers games are apt to outdraw the NFL alternatives in the San Diego market.

That’s the key part here. While ratings may sink sharply following the SDexit (the Chargers averaged a 24.4 household rating in San Diego in 2016, and it seems unlikely they’ll do that following this move), the audience may still be better than it would be for any other option. Krasovic notes that CBS telecasts on a Chargers’ bye week in November pulled just an 11.9 (Cowboys-Ravens) and a 10.8 (Seahawks-Eagles). For all the fans who will boycott Chargers’ broadcasts, and there undoubtedly will be some, others may stay loyal to the team despite the move, and still others may watch in hopes of taking joy in the team’s losing. A rating north of 20 seems unlikely, but it does certainly seem possible that Chargers’ broadcasts will outdraw any alternative.

It’s interesting to note that the Rams were still averaging a 7.2 in St. Louis in November after their own move to L.A. last summer. That’s down from even the 2013 low of 10.9 they posted in St. Louis while playing there, but it’s quite an impressive number for a team that not only left, but hurt a lot of fans in the process. There’s definitely some hate-watching going on there, and that may happen with the Chargers in San Diego as well. As Mier y Teran notes, though, whether Chargers’ games are aired on KFMB isn’t the station’s call, but the call of network executives. If for some reason Chargers’ games don’t keep drawing San Diego viewers, a midseason change to other games could happen.

The other part of this worth keeping an eye on is the effect on the Los Angeles market. The Rams didn’t exactly do well there; two of their November games were outdrawn substantially in L.A. by games at other times involving other teams. The Chargers may not wind up doing much better, especially as they don’t seem to have as much of an L.A. fanbase as the Rams did upon their return (and the Chargers’ previous time in L.A. was only for one season in 1960; the Rams played there from 1946-1994).

As Krasovic’s article notes, bringing the Chargers to town may actually hurt the L.A. NFL TV market overall, at least in the short term. With the Chargers being local, their games now have priority in the AFC package (mostly on CBS), and that’s going to mean less Raiders’ games televised. The Raiders have typically posted excellent ratings in L.A., with their stint in town from 1982 to 1995 playing a big role in that.