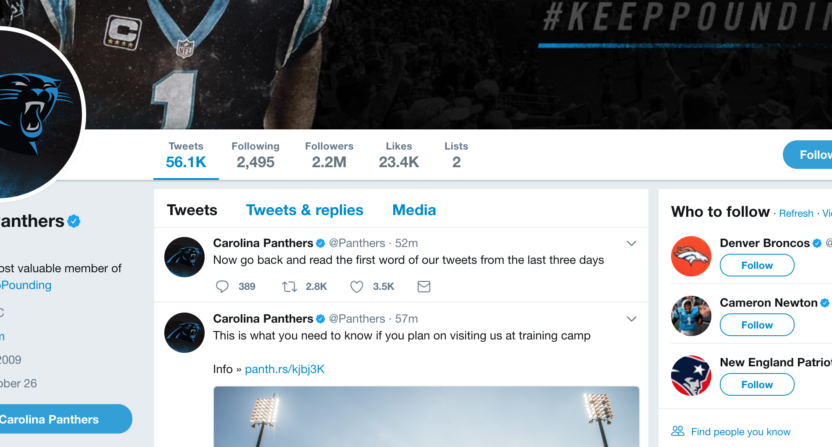 In the year 2017, all entities must have two distinct but intersecting identities: one as a flesh-and-blood person/company/football team and another on social media.

And so millions of hours of brainpower are spent every day trying to turn mindless musings into likes and retweets, for the sake of brand-building or just for the yuks.

And that brings us to the Carolina Panthers’ Twitter account, which spent three days crafting a thoroughly ridiculous gimmick.

Spoiler: The big reveal was that the Panthers’ account had subliminally tweeted out the words to the beginning of the “Fresh Prince of Belair” theme song.

We won’t subject you to all 40 tweets, but here’s a taste:

How does the #Panthers O-Line look heading into training camp?

"My prime better be now"

Got a photo that shows off your #Panthers pride? Share it for a chance to win a VIP trip to training camp!

Flipped into the end zone! This play never gets old. #FlashbackFriday pic.twitter.com/YKFPps422r

Down to 65 Days Until Kickoff! #KeepPounding pic.twitter.com/Xxh39R1zwS

Many people on Twitter seem to find this gag amusing, which is fine. Feel free to be amused. You’ll be happier that way. But I’m a cynical grouch, so I’m left with many questions. Was there any occasion for this remembrance of a TV show that went off the air 21 years ago? As far as I can tell, no. Do the Panthers have any connection to Will Smith, Fresh Prince or that song? Again, not that I know of. Was there any other special reason for these tweets? Only the fact that it’s the offseason and NFL social media managers must be bored as hell.

This is a joke without a punchline, a brand overwhelming your brain with nostalgia that has nothing to do with the product its actually selling. It’s like if Coca Cola aired a commercial full of orange cassette tapes, beanie babies and Aaron Carter and then told you to buy soda.

Imagine how much thought went into this. They must have planned their tweets days in advance. The were probably forced to adapt on the fly when something new came up that required tweeting. They had to forgo reasonable syntax and hope no one would complain.

I’ll admit that as I scrolled through the tweets to see how far back the gimmick went, I did begin to wonder how the Panthers would handle the word “Belair,” a proper noun with no connection to football. Well, turns out they basically cheated.

RT for a chance to win a #Panthers mini helmet! We'll pick a random winner by 3PM today. pic.twitter.com/WOiPFsLSiC

And the worst part is, for all that effort they only got through the little intro. They didn’t even make it to the iconic, “In West Philadlephia born and raised” part. The short version of the song contains 192 words. The Panthers made it through 39 of them.

Of course, for all my cranky complaints, the Panthers got more than 6,300 retweets in the first hour after posting their tweet and are now over 44,000. So yeah, mission accomplished, I guess.