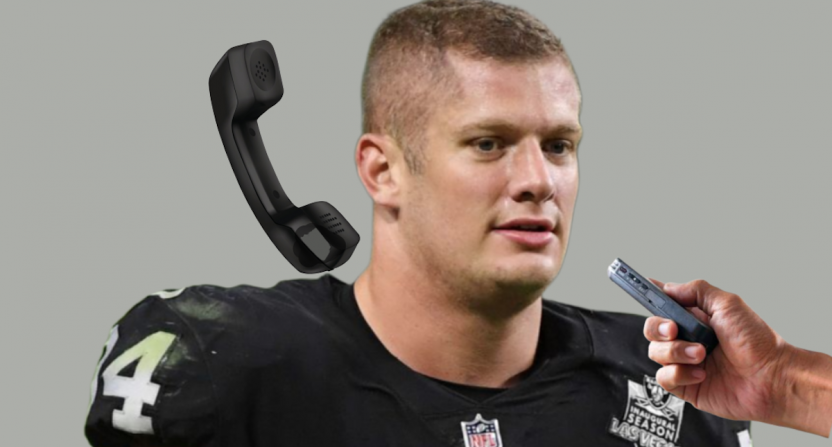 Last week, Las Vegas Raiders defensive end Carl Nassib became the big story in the NFL when he told his Instagram followers that he was gay, making him the first active player to publicly come out.

In the days since Nassib came out, plenty of websites, TV studio programs, and sports talk radio shows have discussed this story and its possible repercussions.

Did Nassib’s announcement get as much attention as it might have a few years ago? (And is that a sign of progress?) Will any of Nassib’s peers soon follow his example? The NFL expressed support for Nassib, along with former and current players. But many of the league’s biggest stars haven’t commented on the matter.

The NFL family is proud of you, Carl. ❤️ pic.twitter.com/HXbcBuLg2X

On Sunday, an interesting sidebar conversation developed on the media aspect of this story. Nassib came out on social media, rather than telling a reporter and letting him or her break the news. But reporters naturally want to follow up with him to get more on the decision. What went into it? Was there something that compelled him to come out now (besides the correlation with Pride Month)? How did the process of telling his teammates and coaches work out?

Yet, as Outsports’ Cyd Zeigler tweeted, Nassib asked the media to “give me some space as I navigate this exciting time in my life” and would likely decline questions and interview requests. Outsports, devoted to LGBTQ+ stories in professional and amateur sports, would seemingly be an ideal outlet to add more to the story.

But Zeigler said he intended to respect Nassib’s wishes for privacy, wouldn’t pursue an interview, and that sort of scrutiny is what keeps so many athletes in the closet regarding their sexuality.

The man asked for privacy and to not be bothered by the media. I 100% respect and accept his request.

If he wants to talk to @outsports he knows where to find us.

That compelled some reporters, including the Detroit News‘ Tony Paul, to respond, saying that journalists would be doing their job by trying to contact Nassib for an interview.

(Paul, by the way, is gay himself and wrote an outstanding column on Nassib, explaining how important it was for the NFL player to come out and show young gay people that there is nothing wrong with them, that there are so many others like them who know how this feels.)

Nassib can always say no, but reporters have to ask. They have to try and get a story.

Ummm, journalists’ job is to try to get the interview and the story. All he can do is say no. https://t.co/rAS9oppoZT

Zeigler said that this wasn’t the type of story that required dogged pursuit and intense investigation. To which Paul responded that pursuing an interview is “the definition of journalism.”

You do what you want. But trying to get the story is the definition of journalism. https://t.co/KDBKarjgtf

Paul’s Detroit News colleague, Neal Rubin, followed up by explaining how a reporter can attempt to contact Nassib without being aggressive and harassing. There’s a difference between simply reaching out and making a major intrusion, though the subject of the inquiry could obviously feel otherwise.

And sending an email or leaving a message saying “Hey, if you want to talk, here’s my number” is what I can do as a reporter, without hesitation.

I wouldn’t pound on his door with a videographer standing behind me, but a gentle tap with a text seems well shy of intrusive.

Exchanges like these are when social media can be useful and insightful, allowing people to see some of the work process involved with the media, along with the decision-making and ethical dilemmas some might face in pursuing a story.

Ziegler has a point and is following his convictions in taking a passive approach. That’s not wrong. But the response from Paul and Rubin is also valid. Reaching out for comment and possibly an interview is a significant part of the profession that we work in. They’re not wrong either, though plenty will believe that the media is unscrupulous, especially if boundaries are respected. It’s entirely possible that neither side will be proven correct here, which is also fine.