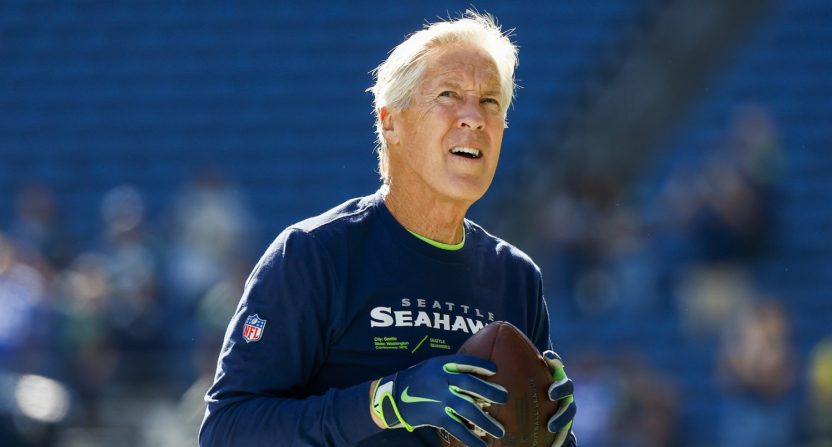 The NFL might see a highly unusual time change around another sport after all. Reports earlier this week saw discussion that the start time for Sunday’s Seattle Seahawks game against the Arizona Cardinals might have its time moved if the Seattle Mariners‘ American League Division Series clash with the Houston Astros went to a fourth game (which would be at the Mariners’ T-Mobile Park, right next to the Seahawks’ Lumen Field, and would start at 3:07 p.m. Eastern Sunday.) And despite some of those early comments coming from Seahawks’ head coach Pete Carroll (seen above during a Sept. 25 game), many in the media were skeptical considering the NFL’s historical reluctance to move its games for other sports. Well, NFL Network’s Ian Rapoport reported Wednesday that the Seahawks’ game will indeed move later if the Mariners play Sunday:

Scheduling note: #AZCardinals vs. #Seahawks on Sunday will move from its scheduled 4:05 PM ET start to 5:30 PM on FOX if the #Mariners host a playoff game that day. Otherwise, it's on at 4:05 pm ET.

This feels logical, especially with those games being at stadiums that are so close together. Close-together starts for Mariners and Seahawks games have the potential to cause plenty of challenges, including with overloading of Seattle’s Link light rail system (which has a stop servicing both stadiums) and with the public safety personnel required for street closures and other actions around pro sports games. A one-hour difference in those starts might have been fine enough, but a two and a half hour difference is much better.

This also seems better for the TV ratings for both TBS (Astros-Mariners) and Fox (Cardinals-Seahawks). Yes, there’s still likely to be some overlap (it’s highly unlikely the baseball game will be done in two and a half hours), but this should minimize the overlap and enhance the local ratings for both. (Not an insignificant factor, with Seattle-Tacoma being the U.S.’ 12th-largest media market in 2022 as per Nielsen.) And this feels like a huge win for Fox in particular, as that means they’ll get to show live NFL football for around 90 minutes longer than normal Sunday thanks to this delayed start.

It is somewhat surprising that the NFL is willing to move a game for another sport. That has not historically been the case, which led to the earlier skepticism. But the 85-minute shift here isn’t the biggest of deals, and while an 5:30 p.m. start for Cardinals-Seahawks would likely cause slight bleed into NBC’s Sunday Night Football (which has the Dallas Cowboys at the Philadelphia Eagles this week, with kickoff set for 8:20 p.m. Eastern), it shouldn’t be a long overlap, and it should boost NFL audiences overall (especially with there now being actual live NFL action between the end of the 4:05 p.m. ET games and the 8:20 p.m. ET SNF kick rather than just a pregame show).

This may all be a moot point, of course. The Mariners lost their first ALDS game 8-7 Tuesday on a late home run by the Astros’ Jordan Alvarez, so if they lose games two (Thursday, 3:37 p.m. ET, TBS) and three (Saturday, 3:07 p.m. ET, TBS), the best of five series is over. But if they manage to extend it to at least a fourth game, it is certainly notable that the Seahawks and the NFL will move the football game later so it has less of a conflict with the baseball game.