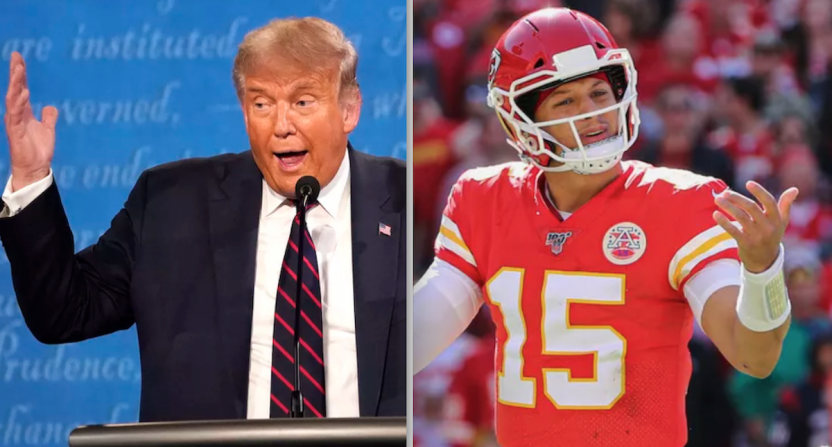 Yeah, yeah, yeah — we know. Stick to sports. But this is one instance where politics and sports definitely intersect, with one likely affecting another.

On Thursday morning, the Commission on Presidential Debates said the second contest between President Donald Trump and Democratic candidate Joe Biden would be a virtual event due to Trump’s recent COVID-19 diagnosis and hospitalization. In response to that announcement, Trump said he wouldn’t participate in the second 2020 presidential debate, scheduled for next Thursday (Oct. 15) in Miami, Florida.

“I’m not going to waste my time on a virtual debate,” Trump told Maria Bartiromo on Fox Business. “That’s not what debating is all about.”

JUST IN: On Fox Business @POTUS says he won’t do a virtual debate.

“I’m not going to waste my time on a virtual debate, that’s not what debating is all about. You sit behind a computer and do a debate, it’s ridiculous.” #7news pic.twitter.com/nRGf7z2j5Z

If the presidential debate doesn’t happen next Thursday, that could have a significant effect on sports broadcasts scheduled for the same night. Currently, a Week 6 matchup between the Super Bowl champion Kansas City Chiefs and Buffalo Bills is set for Thursday Night Football.

Viewership for the first presidential debate on Sept. 29 drew 73.1 million viewers, according to Nielsen. Considering the embarrassing level of discourse between Trump and Biden in that first meeting, ratings for this second debate could earn lower numbers. The interest could also be higher because of the President’s COVID-19 diagnosis and the calendar moving closer to Election Day on Nov. 3.

Yet the possibility of that game between two of the top teams in the AFC being played is uncertain as well, due to the Tennessee Titans’ COVID-19 outbreak. The Titans’ Week 4 game versus the Pittsburgh Steelers was already postponed to later in the season due to coronavirus concerns. But Tennessee is continuing to register positive tests, which puts Week 5’s matchup with the Bills in jeopardy.

There is another Titans’ player positive test this morning and the inconclusive positive test from yesterday is now a confirmed positive, per source. The Titans’ facility remains closed and the prohibition on in person activities continues.

Postponing the Titans-Bills game to Monday, as happened with Week 4’s Chiefs-Patriots game, isn’t a realistic option with Buffalo scheduled to play next Thursday and the shortened timeline for recovery, practice, and travel created by that schedule.

If Week 5’s Titans-Bills game is pushed to Monday or Tuesday, the NFL is considering moving the Chiefs-Bills game to the following Saturday (Oct. 17) as a result, according to ESPN’s Dianna Russini.

I’m told by #Titans and #Bills players they were told there is an option of playing their Sunday game on Monday or Tuesday in Nashville. If that happens, Thursday night’s game between the Chiefs at Bills would be moved to Saturday. This all just being discussed.

Major League Baseball would almost certainly benefit from no presidential debate nor NFL game played next Thursday night. Two of MLB’s championship series games are scheduled for the same night, at least one of which will be in primetime. Depending on how the Division Series play out, Game 4 of either the American League or National League Championship Series and Game 5 of the other will be played.

If the New York Yankees advance to the ALCS, networks may want to put them in prime time. Yet with either the Los Angeles Dodgers or San Diego Padres playing in the NLCS, broadcasting for the West Coast audience may dictate that series is played at 8 or 9 p.m. Of course, the same would apply if the Oakland Athletics end up playing the Yankees.

Ratings for MLB’s Division Series haven’t been strong for a variety of reasons including competition from the NBA Finals, the NFL’s Monday and Thursday night telecasts, and Wednesday night’s vice presidential debate. But viewers would have fewer options next Thursday if the second presidential debate is canceled and Thursday Night Football isn’t played. MLB commissioner Rob Manfred, as well as TBS and Fox Sports (broadcasting the ALCS and NLCS, respectively), might be rooting for such a development.

The third presidential debate is also currently scheduled for a Thursday (Oct. 22). If that event was canceled, it wouldn’t interfere with Week 7’s Eagles-Giants TNF matchup. And the World Series wouldn’t be played that night, with an off-day scheduled between Games 2 and 3.