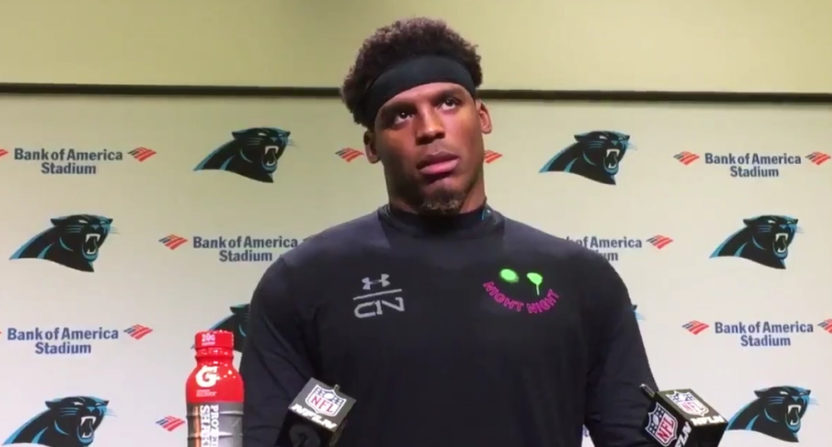 Carolina Panthers’ QB Cam Newton is again in the news for his actions at a press conference. After saying “it’s funny to hear a female talk about routes” earlier this month and getting huge blowback, including a cancelled sponsorship deal, Newton made headlines again Wednesday for rolling his eyes at a question, saying ‘Next question,” and then quickly exiting the podium.

Here’s video from Steve Reed of The Associated Press:

How Cam Newton’s press conference ended today. Left abruptly after answering a question about getting chunk plays with “next question.” pic.twitter.com/5bnPyo7XT8

The question was about “big chunk plays,” ending with “You had several against Detroit and New England. Do you think you guys have the wherewithal to do that consistently week in and week out?” Newton rolls his eyes, responds “Next question,” and then quickly leaves.

Reed did note that this came after he answered other questions for several minutes:

Newton did answer questions for several minutes before departing, but clearly took an all business approach today. No joking around.

The question here didn’t seem all that controversial or baiting, but perhaps Newton didn’t like the implication that his team isn’t producing big plays consistently, or perhaps he had an issue with the reporter or outlet asking. In any case, this seems likely to produce some further controversy.

Update: The Panthers sent out a statement on this: