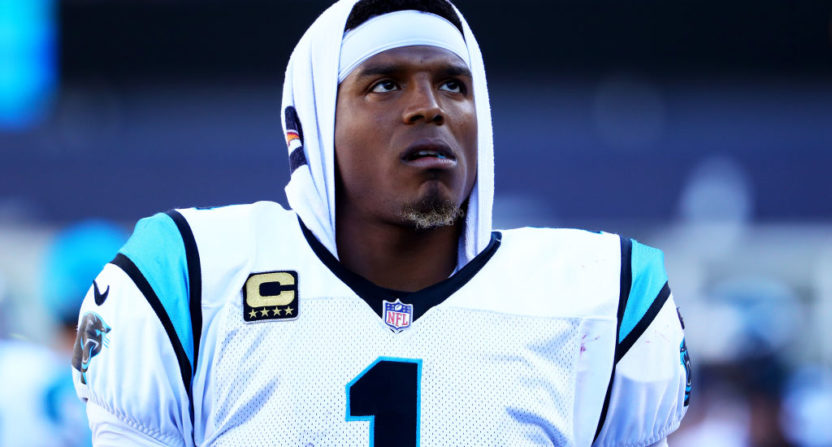 However, Rodrigue herself said “I spoke with him after and it was worse,” and added “he did not apologize for his comments.” That’s a big problem. Rodrigue’s Observer colleague Scott Fowler has more on exactly what happened:

After the news conference, Rodrigue wanted to find Newton and talk about what he said. She did catch up with him briefly. The conversation, according to Rodrigue, was not taped but went something like this:

She asked the quarterback if he really didn’t think a female could understand routes.

Newton said she wasn’t really seeing specific routes when watching the game, she was just seeing if somebody was open. She argued that he didn’t know what she saw nor how hard she had studied football, and that maybe the two of them needed to have a deeper conversation.

Newton said that maybe he should have said it was funny to hear “reporters” talk about routes and that, if she actually did know about them, then she knew more than most reporters. Then he gestured toward the locker room, still filled with her colleagues.

Rodrigue ended by asking Newton – whom she had introduced herself to on the first day of her employment with The Observer in October 2016 – if he knew her name after she had covered the team almost every day for the past year.

Newton said he did not.

“Jourdan Rodrigue, Charlotte Observer,” she said, and then walked away.

Here are the various statements as well:

I spoke with him after and it was worse. I chose not to share, because I have an actual job to do today and one he will not keep me from.

“The comments are just plain wrong and disrespectful to the exceptional female reporters and all journalists who cover our league,” NFL spokesman Brian McCarthy told The Observer. “They do not reflect the thinking of the league.”

Juston’s statement perhaps isn’t completely untrue, as if Newton said maybe he should have said “reporters,” that could be taken as a possible expression of regret. His comments don’t seem like an apology, though. And Fowler’s piece illustrates that Newton didn’t really seem to see why there was a problem with what he said. Sure, it would have been better if he’d said “reporters” instead of singling out “a female,” but those comments would still be ridiculous on his part; plenty of reporters are extremely knowledgeable about route trees and diagramming. And while Rodrigue’s own proficiency there isn’t required in this case (Newton’s comments would still be highly problematic even if she wasn’t analyzing routes), Fowler points out that Newton picked the wrong reporter to go after over football knowledge:

I’ve been covering the Panthers for the past 23 seasons, and Rodrigue knows more about the subtle intricacies of football than I do.

For instance: I sort of know what a wide receiver’s “route tree” is. Rodrigue knows exactly what a route tree is and can diagram one for you.

I kind of understand what a “3” technique is for a defensive lineman. Rodrigue knows just what it means.

So yes, she’s a 25-year-old woman, and she knows a ton about football.

…Rodrigue has pursued being a sportswriter with single-minded determination for the past 10 years. She graduated from the Walter Cronkite School of Journalism at Arizona State. She interned with the Arizona Diamondbacks and the Arizona State athletic department as a sportswriter. She moved to Pennsylvania and wrote about Penn State football, and we were impressed enough to pluck her from there and put her on the NFL beat alongside Joseph Person.

While at The Observer, she has continued to study. I have watched her time and again have conversations with thoughtful Panthers players such as safety Kurt Coleman and tight end Ed Dickson and ask them increasingly detailed questions about football so she can understand more about it.

In short, Jourdan Rodrigue knew exactly what she was talking about Wednesday.

Cam Newton, on the other hand, had no idea.

Newton’s comments illustrate several issues with how some athletes comment on media coverage. For one, this is a spinoff off the old “you never played the game” argument (which conveniently ignores that a lot of those who didn’t play have a better record analyzing sports than ex-players), just with a side of sexism that also ignores how many male reporters didn’t play a sport at a high level. (And that playing expertise or lack thereof really doesn’t have much impact on a reporting job.) ESPN’s Paula Lavigne had a great comment on that, complete with a dig at Newton’s own history:

As a female news reporter, I guess I'm lucky no one's ever suggested I can't cover crime because I haven't, oh, you know, stolen a laptop.

And CBS analyst Amy Trask (the former CEO of the Oakland Raiders) had a nice response to Newton:

But beyond that, it’s presuming an awful lot to say it’s funny that reporters would ask about routes. Many football reporters are extremely well-versed in football terminology, schematics and concepts. Not all, of course, but not all need to be. And presuming that someone whose name you don’t even know (despite them covering your team for over a season) doesn’t have a clue about anything beyond “were they open” is just ridiculous. And doing so explicitly based on gender is even worse.

This also furthers the narrative of football as a “man’s game,” which is ridiculous in its own right. Women play football, coach football, and watch and analyze football. There’s been plenty of discussion of female viewers as a significant part of the NFL audience, and concerns over what happens when that audience declines. Lyndsey D’Arcangelo had a good piece this week on how women are persevering and thriving at all levels of football despite all the barriers in their way:

Women, in general, still have to prove we not only understand football, but that we are good enough to be around it and participate in it. Think about that. Women account for half of the NFL fan base. Do you think we are there just to watch men in tight pants run around a field for four hours, or that we have no idea what is happening on said field? Or maybe, think about this: There are women who work for NASA —yes, NASA—who are mathematicians and rocket scientists. A group of women, considered “human computers,” helped put a man on the moon. Yet, you’re going to tell me that women don’t have the capability of understanding football?

Let me tell you something—football is not rocket science. Not even close. Give someone, anyone, a chance to learn and study the game and it’s like anything else in life, the more knowledge you have the better.

Exactly. And Rodrigue certainly appears to have more knowledge of football than many who cover it regularly. If anything, the one lacking knowledge here is Newton, both of the media in general and Rodrigue in particular. And it’s disappointing that he didn’t really apologize when called out here, and that he didn’t recognize the issues with what he said. If he’d admitted he was wrong and vowed to be better, that’s one thing, but not seeing the problem makes this an ongoing issue. Newton’s casual sexism here’s part of a larger societal problem, to be sure, but it’s disappointing to see this coming from an NFL player instead of an internet troll. He should know better, and do better, and an apology would be a good way to start.