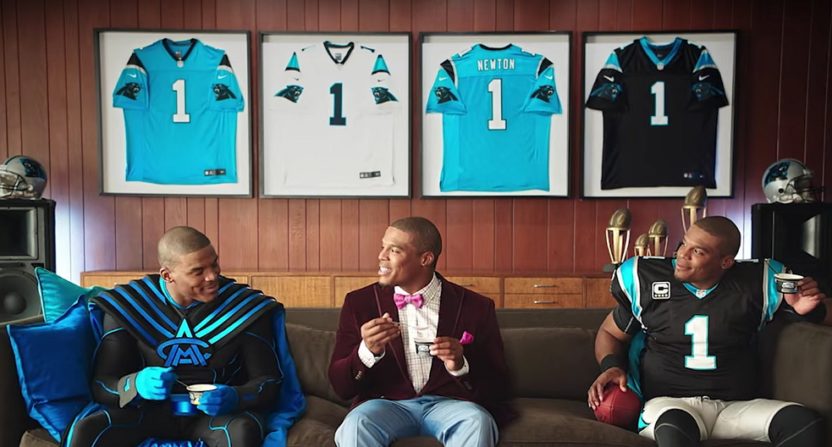 Yesterday at a press conference, Cam Newton responded to a perfectly fine (indeed, above average) question from a reporter in a remarkably sexist fashion. He also didn’t immediately apologize for those remarks, an action that not only fails to combat the current controversy, it also negates the legitimacy of any future apology. If he doesn’t see the problem, he’s not going to experience a sudden epiphany between now and whenever a PR person crafts a written press release.

People are generally willing to give athletes the benefit of the doubt for a live, unscripted response that comes out very poorly, if they display immediate and genuine contrition and understanding. That Newton wouldn’t do that, on top of the nearly impossible to dismiss sexism in his answer, should confirm all you need to know about how Cam Newton thinks on this particular issue: women don’t know anything about football.

A day later, Newton is already losing endorsements, as Dannon has reportedly ceased their relationship with Newton. That was first reported by A.J. Perez of USA Today:

'@dannon cuts ties with @CameronNewton. "We have shared our concerns with Cam and will no longer work with him."

And Darren Rovell, never more in his element, had Dannon’s full statement on the situation:

We are shocked and disheartened at the behavior and comments of Cam Newton towards Jordan Rodrigue, which we perceive as sexist and disparaging to all women. It is entirely inconsistent with our commitment to fostering equality and inclusion in every workplace. It’s simply not okay to belittle anyone based on gender. We have shared our concerns with Cam and will no longer work with him.

There has been some pushback as to how true that is:

Spoke with IMG/WME’s Carlos Fleming, who works with Cam on marketing: “Dannon has not terminated the agreement, nor do they have grounds to”

Cam Newton’s marketing agent Carlos Fleming says Dannon “is still using Cam Newton in advertising.” So, what does this mean? “Ask them.”

But it’s entirely possible and even likely that Dannon isn’t going to pull every single bit of advertising featuring Newton. That’s likely not feasible. But it does seem likely they won’t be making any new ads going forward. And Dannon has also already pulled YouTube videos featuring Newton off their official channels; ads like this one still show up in a Google search as being on the OikosYogurt channel, but are no longer available on YouTube.

It’s an impressively quick bit of turnaround for Dannon, considering there’s a wide swath of the Internet and NFL that has spent their time falling all over themselves to defend Newton’s words.