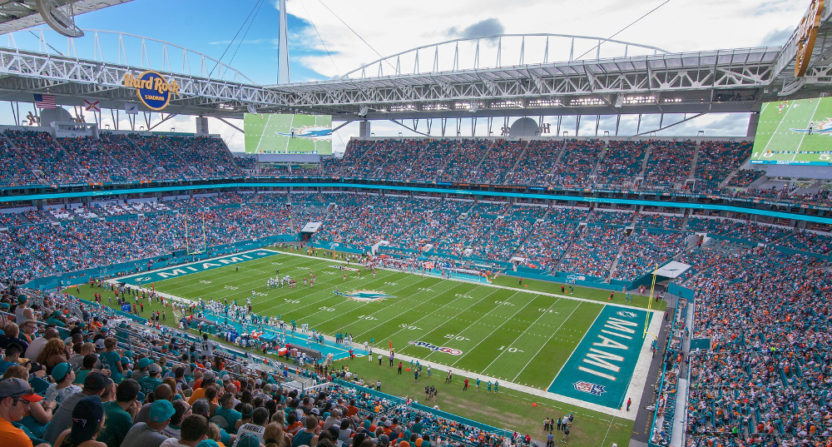 Hurricane Irma’s progress towards the U.S. has moved or rescheduled numerous sporting events in Florida, and Sunday’s planned Tampa Bay Buccaneers-Miami Dolphins game is the latest.

Monday saw reports that the NFL and the teams were debating moving or rescheduling it, and that’s now come true; the league announced Tuesday that the game won’t be played at Miami’s Hard Rock Stadium (pictured above) Sunday. However, they haven’t decided yet if it will be played in another city on that day or rescheduled:

The NFL's statement on the Buccaneers vs. Dolphins game Sunday and Hurricane Irma's impact pic.twitter.com/ku3CaAL5vY

So, we know for sure that the game won’t be played in Miami Sunday, and the “playing an NFL game in South Florida this week is not appropriate” suggests that it won’t be moved up to Friday (like what UCF is doing for their game). While Friday had some benefits (it’s the same location, avoids many of the challenges of rescheduling, and would even give the NFL an extra potential national TV game), hosting an event of that scale in an area that’s likely to get hit by a hurricane would be challenging; the police and other emergency officials needed to stage an NFL game likely have other, more important responsibilities at that time, as do many of the fans.

One solution might be playing the game in Miami later in the year, and the Bucs and Dolphins do actually have an overlapping bye week in Week 11, so it could be played on Sunday, Nov. 19. NFL Network’s Jeff Darlington (a former Dolphins’ beat reporter for The Miami Herald and The Palm Beach Post) tweeted that this would be “the one most sensible date.”

That carries problems too, though, as it would lead to both teams playing 16 straight weeks without a bye and would create three straight road games for Tampa Bay. Some Dolphins’ players told the Herald‘s Barry Jackson missing their bye week would be challenging:

“It would be tough,” quarterback Jay Cutler said. “It would be tough. Guys kind of need that bye week to get healthy and push through the second half of the season. This is latest bye week I ever had. It’s not an ideal situation not to have a bye for us.”

Said cornerback Byron Maxwell: “”I don’t like that possibility, just being honest. I like my bye week. For the most part, your body needs it. Especially with the brutal NFL season. It’s a marathon. It’s not a sprint. If any way they can get the game this week, I would like that.”

Asked if he would prefer to play somewhere else than not have a bye: “Yeah, just put the ball down. Let’s play. At same time, the fans are going to miss out on a home game. I like playing in front of this Miami crowd. That’s a bummer right there.”

Concerns about player safety from skipping those byes were also brought up by Pro Football Talk’s Mike Florio, and echoed by Philadelphia Eagles’ DE Chris Long:

If Bucs-Fins moves to Week 11, both teams will play 16 straight games with no break. Miami will play one of them in London. #playersafety

Should move the game to a neutral site, sell affordable tickets to benefit hurricane recovery. Am I being naive? https://t.co/SvJZHBPjMl

There are definitely some advantages to playing the game elsewhere this week, but that solution has its pitfalls too. Playing in a neutral site this week isn’t easy (arranging a NFL game takes a massive amount of logistical work, even if it’s at an unused NFL stadium), and that would require the Dolphins to give up one of their home games and the associated home-field advantage and revenues. And it’s notable that they already have given up one, as they’re the home team for a game in London this year; so another neutral-site game would mean they would only have six regular-season games in Miami.

In any case, there doesn’t appear to be any easy solution. Playing the game Nov. 19 might be the simplest logistically, but it could have significant competitive effects on the teams, especially with Tampa Bay’s three straight resulting road games. Moving the game up this week would avoid that, but would require massive logistical support ahead of the hurricane, and that appears to have already been ruled out. And moving to a neutral site this Sunday hurts the Dolphins on and off the field.

There are also broadcast implications to consider, and whatever move is made, it will have to be in conjunction with the league’s TV partners. We’ll see what’s eventually decided here, but it seems likely at least one team’s going to be unhappy about it.

UPDATE: If the game is played this week, it could be moved to Philadelphia or Pittsburgh, according to ESPN’s Jeremy Fowler.