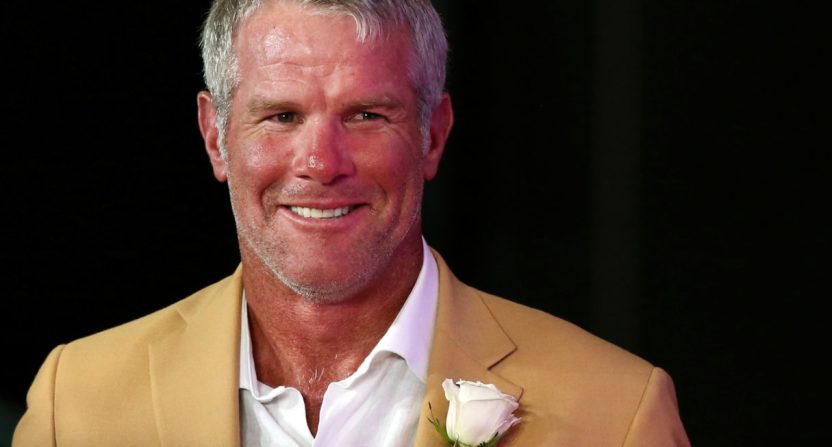 More than three months have passed since Jon Gruden accepted the Oakland Raiders head coaching job, but the network does not appear close to announcing his Monday Night Football successor.

With Peyton Manning having rejected ESPN’s aggressive (and generous) advances, the network reportedly turned to another former MVP quarterback, Brett Favre, for an audition. That try-out, however, doesn’t seem to have gone so smoothly. Via the New York Post’s Andrew Marchand:

Favre recently came in for one of the auditions, according to sources. Though it was unclear if Favre would even want the job, sources said he was not great during the tryout and has been told he is no longer under consideration. Favre’s agent, Bus Cook, did not return a call. ESPN declined comment.

It’s not exactly shocking that Favre submitted an underwhelming audition. He was a great quarterback and is probably a smart enough guy, but he was never quite as polished or well-spoken in front of the camera as Manning was, and he has no significant experience in television. From afar, his personality seems like a better fit for Wrangler commercials than for the broadcast booth.

And so the search continues.

With Manning and Favre out of the picture, ESPN will almost certainly have to settle for a less splashy name to call Monday Night Football alongside Joe Tessitore. In-house candidates Matt Hasselbeck, Randy Moss and Louis Riddick have been floated for a while, as have NFL Network’s Kurt Warner and recently retired offensive lineman Joe Thomas, but the network seems to be casting a wide net. Marchand reports that ESPN has already auditioned Jason Witten and Greg Olson, with plans to bring in studio analysts Rex Ryan and Booger McFarland as well.

In other words, the folks in Bristol seem to have no idea who will call Monday Night Football next season, except that it won’t be Brett Favre or Peyton Manning.

UPDATE: Favre appears to dispute the Post’s characterization that he performed poorly at his audition. In a tweet Tuesday night, the former quarterback said he decided not to pursue a broadcasting career at this point.

Wanted to clear something up from today’s press on me & ESPN. Truth is I had a good meeting about possibly joining the MNF crew. I was intrigued when they called yet not sure I want to pursue a broadcasting career right now. I wish them the best of luck and a great season. Brett