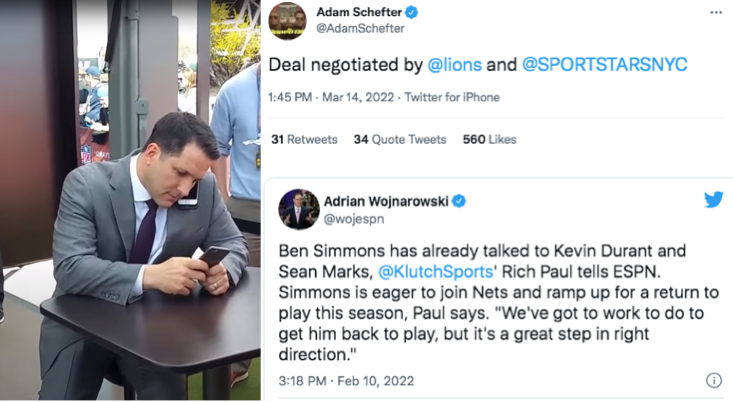 In the NBA world, it’s Adrian Wojnarowski vs. Shams Charania.

In the NFL world, it’s Adam Schefter vs. Ian Rapoport vs. Tom Pelissero vs. Mike Garafolo and others.

The insider breaking news business is a serious one. Controlling the scoop can often be the first link in a much larger chain that feeds a network’s editorial strategy for an entire day. Or longer. And the more scoops you break, the bigger your profile gets and the more respected you get within your company and the industry as a whole.

The stakes are high for these insiders and, with Schefter in particular, we’ve seen many of the pitfalls that come with that.

The battle for NBA breaking news is an especially intriguing one as you’ve got the self-made upstart in Shams versus the purveyor of Woj Bombs. So serious is the effort to become the most insider-y insider possible that we learned via former NBA beat writer Ethan Strauss that Woj allegedly forwards “a packet of documents” to “agents and NBA team employees, as part of a personal campaign” to encourage them to leak news to him instead of other NBA insiders. Included in those documents is a PowerPoint presentation with social media and analytical comparisons of Woj’s reach and the reach of rival news breakers, including Charania.

In February, it was Strauss again who penned a write-up in his newsletter titled “Adrian Wojnarowski Trades Away the Story,” in which he took note of a developing trend in the way that Woj would break certain news. The write-up came out of a desire to dig into the way that the ESPN insider seemingly tried to posit the James Harden-Ben Simmons trade as something that wasn’t happening. Woj even went so far as to contradict colleague Brian Windhorst, who turned out to be reporting the impending deal correctly.

When it became obvious that the Nets and Sixers were working on a trade, Woj shifted tone but remained adamant that negotiations were recent, continuing to undercut Windhorst’s reporting. While Strauss gets into the finer details a bit more in his newsletter, the essential gist is that the way Woj reported the entire saga seemingly gave leverage to Simmons, who is repped by Rich Paul and Klutch Sports. And that’s what makes tweets like the one where Wojnarowski links to the Klutch Sports Twitter account more eye-grabbing.

Ben Simmons has already talked to Kevin Durant and Sean Marks, @KlutchSports' Rich Paul tells ESPN. Simmons is eager to join Nets and ramp up for a return to play this season, Paul says. "We've got to work to do to get him back to play, but it's a great step in right direction."

As the theory goes, by refusing to say that a trade was imminent, Woj was essentially helping Simmons and Paul gain leverage over Brooklyn GM Sean Marks, who felt more and more desperate to make something happen as the Nets season started crumbling in the days leading up to the trade deadline.

Is it 100% true? Who knows for sure. But the aforementioned tweet is an example of the way the “magic” of the insider has diminished and the public lines between agency sources and reporters have blurred to the point where it’s effectively commonplace to see agents get directly linked in tweets by everyone from Woj to Schefter to Garafolo to many others looking for a leg-up in the game.

Cardinals' LB and special-teams standout Dennis "The Barbarian" Gardeck reached agreement with the Cardinals on a three-year, $12 million deal, per his agency @SportsAmdg.

Folorunso “Foley” Fatukasi intends to sign with the Jacksonville Jaguars, per sources. Fatukasi is repped by @SPORTSTARSNYC .

The #Browns have agreed to terms on a one-year deal worth up to $5 million on DT Taven Bryan, according to his agents at @SPORTSTARSNYC. The former #Jaguars first-round pick is headed to Cleveland.

Christian Kirksey is signing a two-year extension with the Houston Texans, per source. Veteran is considered a leader for Lovie Smith's defense. Kirksey is repped by @SPORTSTARSNYC

Schefter seemingly took things a step further on Monday when he separated out the breaking news and the agency sourcing into a two-tweet thread, calling even more attention to the direct connection.

Deal negotiated by @lions and @SPORTSTARSNYC

You couldn’t possibly make the subtext text any better than this.

"Can you shout us out on Twitter if we leak you info" https://t.co/ELu3t41tpF

As Strauss put it, “it’s a vision of a frictionless dynamic. You hand-deliver Woj the goods, not a moment too early or a moment too late, and he bolsters your reputation. Everybody wins.”

And now, because agencies want to keep up with Klutch Sports and because insiders want to build a brand like Woj, citing your sources is suddenly the norm in a business that very often left the specifics in the shadows in order to remain impartial.

The ultimate question then is…does any of this even matter?

You could make the case that it’s not as if most sports fans didn’t know that’s how the sausage was made at this point. Revealing that, in many instances, a reporter is breaking news based on information from a player’s agent isn’t exactly a groundbreaking revelation. Seeing that Woj or Rapoport are trading information for Twitter mentions also probably isn’t going to make many people unfollow them.

What does it signal to the consumer or reader, however, is that when it comes to the relationship between the impartial journalist and the agency, how much is one dictating the flow of information to the other? There have been concerns for years in the ways that Adam Schefter shares information on social media, often seeming more like a cheerleader for the league or players he covers than an impartial news source. He’s even been caught literally handing over an article to a source beforehand so they can copyedit it.

It makes you wonder. If the agency wants it known that they were the source in this instance, how many other instances are we seeing where they asked not to be and why?

And since companies like ESPN have invested so much in these breaking news insiders as the faces of their coverage, the notion that they are using their platforms to provide slanted information for the benefit of whichever agency happens to be feeding them changes the perspective of how you consume that network’s subsequent coverage of that news.

Not to mention, every so often, it just kinda proves you to be pretty lazy.

What is the value of being credited first on a breaking news story? Especially in a world where sourcing is a constant issue of consternation for sports journalists, and very often fails to even register once the news is out there anyway. Not to mention we live in a time when “Ballsack Sports” can easily pass as a legitimate news source for major networks.

It’s cliche but the battle to be first overthrew the desire to be correct a long time ago, perhaps as soon as companies like ESPN, Yahoo!, and Fox saw the immense engagement numbers that a breaking news tweet could do. Pivot to video? Not exactly, but the same general idea.

The question to ask yourself is whether or not some of these breaking news insiders are still first and foremost journalists, or if by stripping away the magic and mystery, they’re just showing themselves as cogs on the assembly line of information as powerful people would like it to be disseminated? It would be unfair to paint everyone with that brush, but you certainly are the company you keep. And maybe that always was the case for some of them and we just couldn’t see behind the curtain. Now, however, they’ve gladly pulled back the curtain and shown everyone how the trick is done. And yet…does it matter?