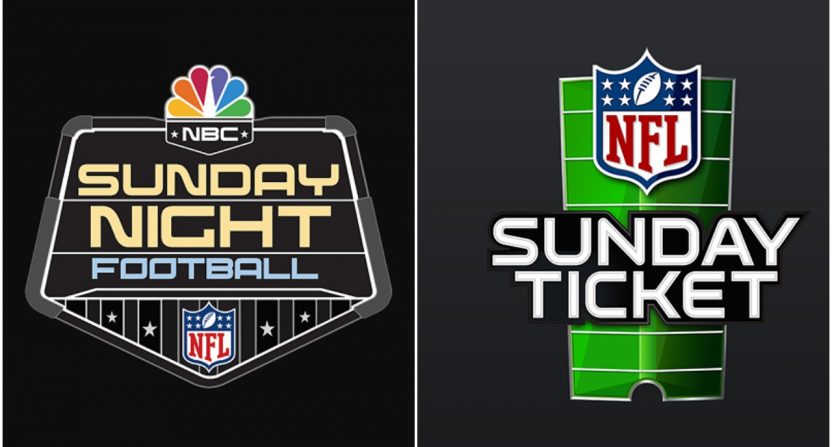 Two different reports came out Monday regarding the futures of two valuable NFL properties, so it made sense to combine them here as we fire up the report, speculation, and rumor mill.

First, the bigger brand name: NBC’s Sunday Night Football, the future home of which was the subject of a lengthy Andrew Marchand piece for the New York Post. According to Marchand, Disney is major competition for NBC’s rights. The next round of bidding could be finished soon, though, even though the current deals aren’t up until the end of the 2022 season. Disney has been making noise for a while about wanting to get ABC back into the NFL, especially for the postseason and most importantly the Super Bowl rotation, so

At the moment, ESPN spends $2 billion per year for an inferior Monday Night schedule and no Super Bowls, while NBC writes a check for a mere $950 million for Sunday Night, which includes flexible scheduling that allows the NFL to shift better games into prime time, as well as a spot in the Super Bowl rotation.

NBC also has two playoff games per year compared to ESPN’s one. (NBC added another playoff game this year with the expanded format.) ABC currently has no regular package, but occasionally simulcasts ESPN’s productions.

ESPN’s extra cost does allow it to have almost wall-to-wall highlights on its network daily, which is something NBC, Fox and CBS don’t have. ESPN broadcasts the draft and the Pro Bowl.

If Disney were able to swipe “Sunday Night Football” from NBC, it would likely place it on ABC. In such a scenario, NBC would still be in play for Monday or Thursday night action. Both Disney and NBC could try for Fox and CBS’ Sunday afternoon packages.

Will we end up with ABC prominently back in the picture? It’s too early to say, though NBC has a lot of incentive to maintain their Sunday Night Football continuity going forward. At the very least, ESPN/ABC getting another playoff game and possibly into the Super Bowl rotation feels a lot likelier than a massive shift among primetime deals, but stranger things have happened.

Meanwhile, another piece of the NFL rights landscape could be on the move. The NFL Sunday Ticket out-of-market package, long exclusive to DirecTV, could finally hit the market. This has been talked about for a while as well, but for the first time there’s a solid report, from Sports Business Journal’s John Ourand, that has the satellite service seemingly ready to not just give up exclusivity but prepared to move on completely.

By that time, it’s likely that NFL Sunday Ticket will be on an entirely new platform. DirecTV pays an average of $1.5 billion per year for an exclusive deal that ends after the 2022 regular season. The NFL currently is negotiating a new deal, and sources say that DirecTV has showed tepid interest, at best. Right now, it seems virtually certain that DirecTV will not have the out-of-market package exclusively. Sources say it is likely that DirecTV will take a pass on the package altogether.

Ourand goes on to list the players who could be interested in acquiring Sunday Ticket for their streaming services, and it’s the exact list you’re probably thinking of. Peacock, Amazon Prime, ESPN+, etc.

Compared to the Sunday Night Football deal, this package does certainly seem much likelier to hit the market. The old DirecTV deal is clearly from another era; it’s hard to imagine any company now paying anything close to $1.5 billion annually. But an out-of-market package like that would have a lot of value as a differentiator for any one streaming service, and that looks likely to be the next destination.

In addition to the subscription streaming services mentioned by Ourand, it would also be a fit for cable alternatives like, say, YouTube TV, which this year added a premium sports tier including NFL RedZone, and is also currently in limbo with a variety of local sports channels.

NFL fans presumably hope for one thing: that it lands on a service they’re already paying for.