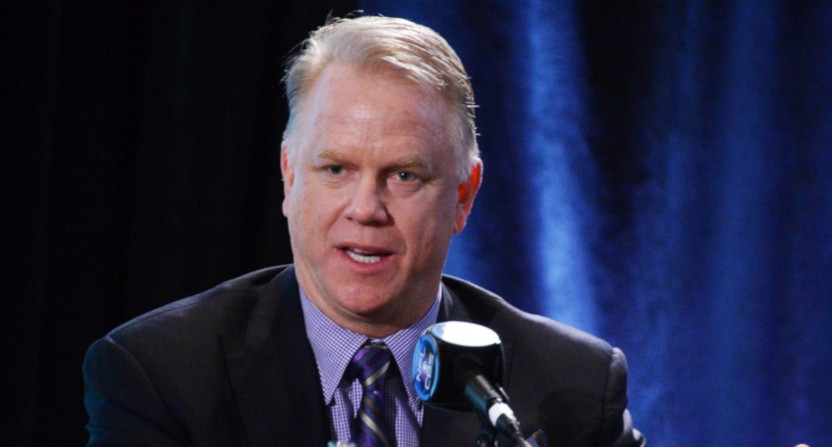 With Tony Romo out for CBS’ Cardinals-Rams broadcast Sunday thanks to COVID-19 protocols, Boomer Esiason (normally a NFL on CBS studio analyst these days, in addition to his daily morning show on WFAN) was tapped to fill in alongside Jim Nantz. And on one particular play in the first half, Esiason (seen above in 2014) managed to annoy a whole lot of CFL fans with a remark about a pick-six to Rams’ DB Troy Hill thrown by Cardinals’ quarterback Chris Streveler, who was the Winnipeg Blue Bombers’ backup/run-package quarterback in 2019 when they won the Grey Cup. Here’s the play as it happened:

This Chris Streveler throw against the Rams turned into a pick-six. pic.twitter.com/tYxHFFtqvM

And here’s a transcription of Esiason’s comments over those two clips:

“What a horrific mistake by Reveler [sic]. He throws it in between three Ram defenders as he is getting hit in the pocket. You know, this isn’t the Grey Cup, this isn’t the CFL, and you can’t just take chances and throw the ball down the middle of the field and expect somebody not to come down with it. And you can see it right here, there’s no reason to throw the ball there.”

This sparked a lot of ire from CFL fans and media members, and for good reason. To start with, it’s completely unnecessary to include where someone last played when criticizing them. But more importantly, this isn’t even factually accurate. As many noted, this particular throw likely wouldn’t have worked in the CFL either. And Streveler’s CFL stats illustrate that; even if this was a typical throw for him (which is debatable, at the least), he was not a typical CFL quarterback.

Streveler was primarily a backup in Winnipeg during 2018 and 2019, filling in as a starter mostly due to injuries to Matt Nichols and later Zach Collaros and being used as a backup/run-package quarterback when those starters were healthy. In 2018, he started five regular-season games and played in 11, completing 86 of 140 passes (61.4 percent) for 1,134 yards with 11 touchdowns and five interceptions. In 2019, he started seven regular-season games and played in 17, completing 156 of 234 passing attempts (66.7 percent) for 1,564 yards with eight touchdowns and 14 interceptions (tied with Ottawa’s Dominique Davis for second-most in the league, behind B.C.’s Mike Reilly with 15).

And in both of his CFL seasons, Streveler was more notable for his rushing ability. He carried the ball 77 times for 441 yards (5.7 yards per carry) and 10 touchdowns in 2018, and 127 times for 726 yards (also 5.7 yards per carry) and 12 touchdowns in 2019. In the 2019 playoffs with Collaros healthy, Streveler was mostly used in rushing packages; he set a CFL playoff record in the West semifinal against Calgary by taking 23 snaps without attempting a pass, then recorded just one pass attempt and four carries in the West Final against Saskatchewan. He did play a larger role in the 107th Grey Cup against Hamilton, running for 30 yards on nine carries, completing all three of his pass attempts for 39 yards and a touchdown, and even catching a pass from receiver Darvin Adams to pick up 13 yards on a trick play.

But Streveler wasn’t the Bombers’ starter or their main passing option (that would be Collaros, who completed 17 of 23 passes for 170 yards) or their main offensive weapon (that would be Andrew Harris, who ran 18 times for 134 yards and a touchdown, added five catches for 35 yards and another touchdown, and was named both the Grey Cup’s Most Outstanding Player and Most Outstanding Canadian). So it’s a huge stretch to claim that a Streveler throw in the NFL is indicative of anything about the CFL; by and large, the CFL didn’t have him throw much.

And the NFL hasn’t had Streveler throw much either. He was signed to a reserve/future contract by the Cardinals in February, and it’s notable that Cardinals’ head coach Kliff Kingsbury is also a former Blue Bombers’ backup. But Streveler hasn’t seen the field much this year; his stats ahead of Sunday saw him appear in just four games and record just one stat, a three-yard rush. He only wound up playing Sunday after Arizona starter Kyler Murray got hurt on the first drive. So having Streveler throw deep passes, over the middle or not, was never much of a plan in the CFL, and it hasn’t been the plan in the NFL either. So it’s a little funny to hear Esiason trotting out a claim that’s essentially saying “That might have worked in Canada, but not in THE NATIONAL FOOTBALL LEAGUE!” when it’s about something that Streveler has not usually been asked to do in either league.

And beyond that, it’s a bit interesting that Esiason chose this particular player and this particular throw to go in on so hard. Yes, it ended up in a costly interception, and that’s worth some criticism. But NFL quarterbacks throw interceptions every Sunday, and you don’t usually hear this kind of a roasting when it’s a throw from a more-established starting quarterback. And while Esiason does have a background in game analyst work (he worked on Monday Night Football on ABC from 1998-99, then on Westwood One’s NFL coverage from 2000-2018), this felt more like a radio hot take than a usual game analysis remark. This is Esiason punching down at a younger player who doesn’t yet have a lot of fans for his NFL play.

And it’s punching down with some exaggeration, too. The throw is not “down the middle of the field,” as Esiason claimed (it’s caught about halfway between the outside hashmark and the sideline), and it’s not “in between three Ram defenders” (there are two defensive backs visible in the live-play frame, but there are also two wide receivers, so that’s not even double coverage; there is a third player visible on the replay, but he’s way in front of where the ball comes down and never had a shot at it). It was a poor throw, but it was under pressure (Streveler gets hit after the throw), and the issue here was more execution (the ball was underthrown) rather than decision-making.

And Streveler finished the day with 11 completions on 16 attempts for 105 yards with one touchdown and one interception in the Cardinals’ 18-7 loss to the Rams, which is hardly abysmal. Yes, he made a mistake here, but quarterbacks make those every Sunday. Spinning that particular throw up into an indictment of an entire league that never asked Streveler to throw much, and picked him off frequently when he did make bad throws, is quite a call from Esiason. But as former CFL quarterback/Sportsnet commentator Travis Lulay pointed out, maybe this is what we should expect from a backup game analyst:

Also, Boomer knows he’s only calling this game because the starter is out too, right? Ok now I’m done. https://t.co/K0RjC6DSye

At any rate, the general CBS broadcast wasn’t as bad when it came to Streveler. They even showed a nice video of his famous post-Grey Cup celebrations earlier in the broadcast (albeit with Esiason comparing him to Kevin Costner in Yellowstone):

But Esiason’s over-the-top commentary on this pick was remarkable, perhaps especially considering his 184 career NFL interceptions in 187 regular-season games. He probably made some worse decisions in that span than Streveler did on this play, and he probably didn’t get called out for it quite this way. And poor throws from him certainly weren’t inaccurately chalked up to something that would have worked in the professional league he previously came from, as he went straight from college at Maryland to the NFL. It’s hard not to think that Romo probably would have done a better job of handling this call, and it’s unfortunate that an entire league got unnecessarily insulted by a CBS backup game analyst.