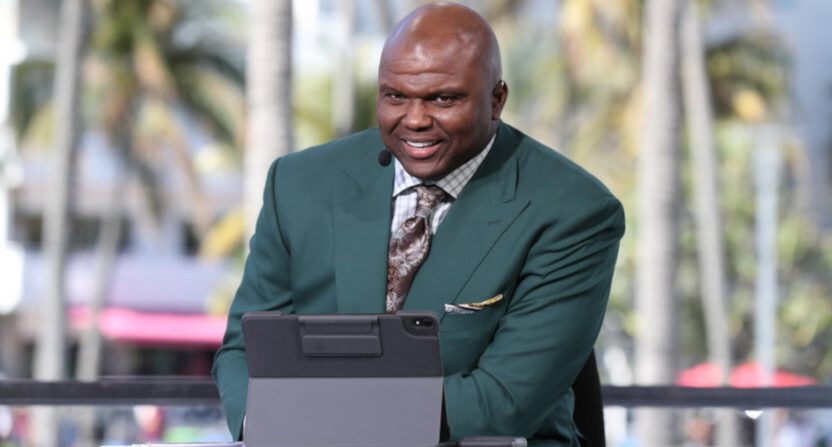 ESPN announced its NFL pregame studio plans for the 2020 season, and the two biggest takeaways are that Monday Night Countdown will be broadcast from the studio (as opposed to on-site) this season and that Louis Riddick’s replacement on set will be Booger McFarland.

The network’s release touted the decision to move both Sunday NFL Countdown and Monday Night Countdown to ESPN’s New York Seaport studios this year. The Sunday Countdown crew remains the same as a year ago: Sam Ponder hosts, joined by analysts Tedy Bruschi, Matt Hasselbeck, Randy Moss, and Rex Ryan. But instead of airing from Bristol, Countdown will air from New York, much like Get Up, First Take, and various other ESPN studio shows. However, the NFL pregame shows (as well as NBA Countdown heading into the Eastern Conference Finals and NBA Finals) will air from a new rooftop location.

One of those other studio shows that will air from New York this season is Monday Night Countdown, which typically has aired on-site (and on-field) at the evening’s host stadium. But with pregame TV reporters being barred from field access this season as part of the NFL’s COVID-19 policies, ESPN opted to keep Monday Countdown in the studio this season (which also cuts down on travel).

The other big new about Countdown is McFarland’s addition to the set in a straight swap with Riddick, who was part of the Monday Countdown crew in recent years. Riddick will be in the Monday Night Football booth this season with Steve Levy and Brian Griese, and former MNF analyst McFarland is replacing Riddick on set alongside host Suzy Kolber and analysts Moss and Steve Young. The release notes that Young will be on-site at the MNF game “most weeks,” while McFarland and Moss are in studio (which also makes sense, given the status of Moss on Sunday Countdown and McFarland on Saturday’s ABC college football studio coverage).

The common sentiment is that McFarland will be far better in a studio setting (rather than a game analyst role), and by giving him roles covering both college football and the NFL, ESPN has given him a soft landing after removing McFarland from MNF. I wouldn’t be surprised if he continues to get negative attention on social media (because some fans just can’t be swayed), but this is a far better position for McFarland to be in rather than in the booth (or on a cart at field level).