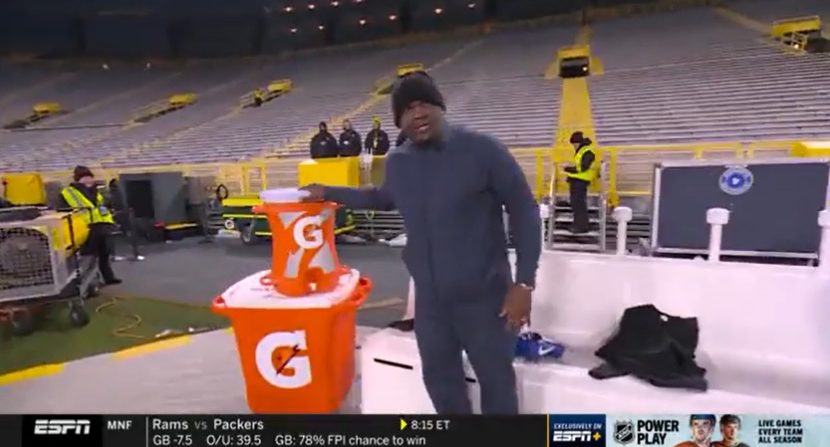 The final weeks of the NFL regular season and the postseason are often played in cold weather. In that situation, how does one keep warm on the sidelines? ESPN’s Booger McFarland revealed his strategy on Monday, and it’s a doozy.

While talking with Alex Smith on ESPN’s Monday Night Countdown at freezing Lambeau Field ahead of Monday night’s game between the Los Angeles Rams and Green Bay Packers, McFarland revealed that instead of Gatorade, he’d have chicken broth — with something else on the side.

“A little trick of the trade. In the summertime, we have Gatorade,” McFarland said. “But in the wintertime, no Gatorade. We’re going to have a little chicken broth over here in our Gatorade cooler. And if you’re like me, you might have a little shot of something over here, maybe something a little stronger on the side — just to give you a little warmth down your throat. Maybe a little whiskey. I’m not saying that everybody does it. But I’m just telling you what I did to stay warm.”

ESPN gotta bring back Sports Science to explain this one ? pic.twitter.com/Wbqvz2Mz7T

This wouldn’t have come up too often for McFarland during his playing career — at least not in home games. From 1999-2006, he played in warm weather, for the Tampa Bay Buccaneers. He then finished his career in 2006 and 2007 with the Indianapolis Colts — who play in a dome.

McFarland has talked about this in the past. In 2016, he revealed that players would drink whiskey in the locker room when getting ready for a cold game.

But this is a little different.

The NFL has recently reminded its teams of its policy on alcohol — it’s never allowed. While alcohol is frequently a part of postgame locker rooms in other sports — especially after championship-clinching games — it’s not permitted in the NFL. That includes not only locker rooms, but team buses and planes.

McFarland’s revelation on Monday wasn’t terribly surprising. For some people, it was even endearing. But the NFL may not like having a former player and current broadcaster reveal that some players drink whiskey during cold weather games — especially given that he said this during the pregame show for what will be a cold-weather game.