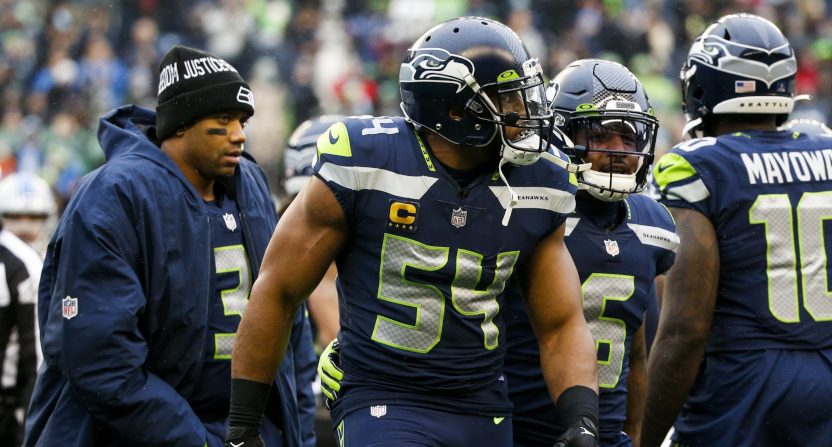 The reporting of NFL contract details can be notable, but it’s tough to get it exactly right considering the variety of possible terms that are used (guaranteed pay, guaranteed bonuses, performance bonuses, future offsets for guaranteed money, and more). The best way to offer a neutral breakdown of a contract is to have a full copy of the contract, and obtaining that carries its own challenges. But even that sometimes isn’t enough: on Monday, Mike Florio of Pro Football Talk had a copy of Bobby Wagner’s five-year, $50-million contract with the Rams, which he used to initially defend his reporting on that contract against a critique from Wagner. But he then offered a correction after looking at the contract in detail again:

Agents really don't want to see players represent themselves even if they pose no threat. But at least if you going to report the contract, you should get the details correct https://t.co/Gwn8I4cSs7

I made one more pass through the contract. The 2023 roster bonus guarantee does not contain offset language. If it ends up being a one-year deal, it's $6.5 million this year and $3.5 million next year, with next year's payment not reduced by other earnings.

This is an important difference on a few fronts. For one thing, it’s $3.5 million more guaranteed dollars in Wagner’s pocket; if the Rams do cut him any time after April 8 this year, he receives $3.5 million from them next year as well as the $6.5 million already guaranteed to him this year, and that’s not reduced by any contract anyone else signs him to. And that’s 35 percent of the total value of this contract if it does wind up being just a one-year deal. So it’s not small potatoes. (Yes, of course, this contract could go the full five years, but Wagner (seen above on Jan. 2 against the Detroit Lions) is 31, and both sides have some outs built in. So there’s value in talking about what it might end up as if it is just a one- or two-year deal.)

But this also elevates what the Rams are committing to Wagner to $10 million total guaranteed for this year, and then $10 million more ($7.5 million salary, a $2.5 million 2024 90-man roster bonus guaranteed as of the fifth day of the league year in 2023) guaranteed if they keep him for the 2023 season. (And that’s before performance incentive bonuses.) So their deal really has a minimum of $10 million guaranteed (and for one year), not $6.5 million guaranteed. And that stands out when you consider that a major other component of Florio’s discussion of this was this tweet about the offer Wagner got from the Ravens:

The Ravens, per source, offered Bobby Wagner $18 million fully guaranteed at signing over the first two years of the contract. He declined that offer to sign with the Rams.

On the financial side, the Rams’ offer has more guaranteed if Wagner is good enough to stay on that roster in 2023; the Ravens’ offer has more money immediately guaranteed. So just from a financial perspective, Wagner’s making a slight bet on his own playing abilities. And that’s a fair thing to do, and his choice to make. But accurate reporting here is important to show that the Ravens’ offer wasn’t head-and-shoulders better: as Florio relays it, it was $18 million guaranteed for two years, while the Rams’ deal is $10 million guaranteed now, $10 million guaranteed if he’s still on the roster next year. Either of those options is a reasonable one to take.

And, on that front, it’s notable that this maybe matters more with Wagner representing himself rather than having an agent. And he’s spoken out on that on a couple fronts recently; he told Greg Beacham of The Associated Press that he doesn’t buy Seattle GM John Schneider’s comments about poor communication with him being partly because he didn’t have an agent.

Full quote from Rams LB Bobby Wagner about how he wishes Pete Carroll and John Schneider had handled his release better in Seattle after 10 seasons (re: black jerseys at the end, he always wanted to get Nike to make a black Seahawks jersey) pic.twitter.com/NR0UqMWdRq

With players who represent themselves in particular, there’s sometimes a regrettable tendency from some media and some agents to insult their contract decisions without full information on why they did it the way they did. Yes, absolutely, agents can provide value and get players better contracts in some circumstances, but representing yourself can also work in other circumstances. And one player’s contract really shouldn’t become a referendum on if having an agent is good or bad. (And, to be clear, Florio’s piece doesn’t appear to have ever explicitly made that argument. But Wagner certainly appears to have interpreted it that way, as seen with the way he responded to Florio.)

Mistakes do happen, especially with trying to parse complicated documents. And NFL contracts certainly can be complicated. But it is interesting to see Wagner go so hard at Florio here, and to see Florio initially standing by his analysis, then later correcting it. And, if anything, it’s one more reminder to be extremely cautious with breaking down NFL contracts and just how much of them winds up being guaranteed.