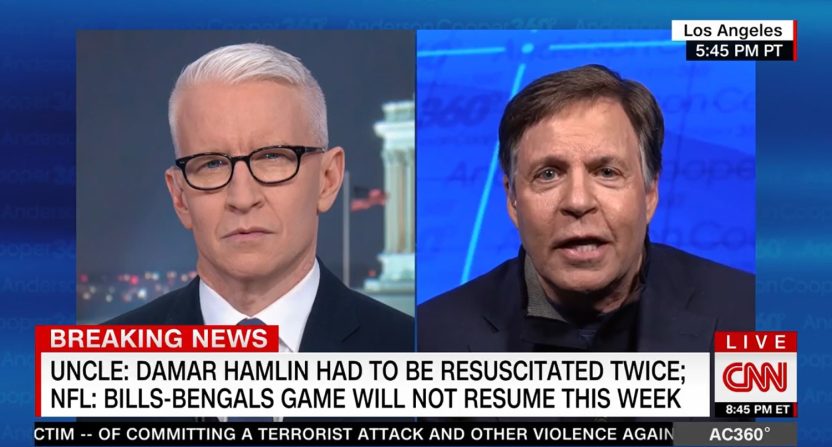 While the NFL wonders how they can complete the suspended Buffalo Bills-Cincinnati Bengals matchup, Bob Costas wonders if anyone wants them to.

Monday night’s showdown between the Bills and Bengals was touted as the biggest game of the regular season. A primetime matchup between two teams, each with star quarterbacks vying for a top seed in the AFC, it had the hype and feel of a playoff game. But after Bills safety Damar Hamlin tragically went into cardiac arrest and needed medics to restore his heartbeat on the field, no one wanted to see the game continue.

After initially hoping to restart the game despite Hamlin’s unknown status, the NFL eventually realized neither team was going to get back on the field and announced the game was being postponed. Now, with Hamlin still in critical condition, are players or fans any more apt to watching the game resume one week later? Bob Costas joined Anderson Cooper on CNN Tuesday night and vouched for the NFL to cancel the postponed game.

“I don’t think anyone wants to see these two teams return to the scene in Cincinnati of this traumatic event,” Costas told Cooper. “Especially when we don’t know what the future holds for Damar Hamlin at this point.”

According to Costas, the NFL should let Week 18 play out as scheduled, with the Bills hosting the Patriots, the Bengals playing the Ravens and top-seeded Kansas City taking on the Raiders. The NFL would then use winning percentages, not win-loss records to determine playoff seeding considering the Bills and Bengals will have played one less game on the season.

Tuesday morning, Boomer Esiason presented the scenario of the NFL pushing back the entire slate of Week 18 matchups to allow the Bills and Bengals to complete their game. That plan would delay the playoffs one week and eliminate the bye that currently sits between the championship games and Super Bowl.

While Esiason’s scenario is possible, that’s a lot of logistics to work through to complete a game that maybe, nobody wants to see get completed. The toughest request may not be asking 32 teams and 16 stadiums to drastically alter their schedule with little warning, the toughest request may be asking two teams to return to a site where they witnessed a traumatic event just days earlier.

“The most likely outcome it seems,” Costas continued. “Is this game just never gets replayed.”