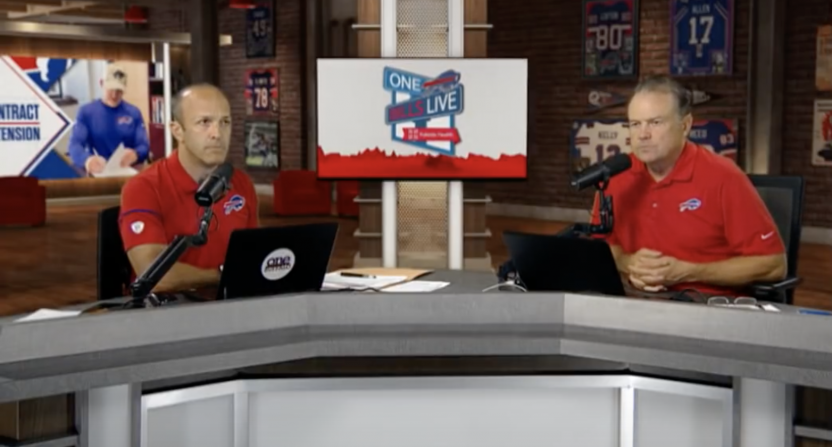 According to Tim Graham of The Athletic, the Buffalo Bills have banned team radio host and web reporter Chris Brown for violating the team’s media policy. The new policy, due to a lack of preseason games and the public being unable to attend training camp, bans media members from reporting on game strategy, snap counts, and players participating in various units.

Brown has been the host of One Bills Live since August 3, but has been the team insider for years. It was on One Bills Live, which is simulcast on WGR 550 in Buffalo, MSG Network, and the Bills’ YouTube page, where Brown was appeared to have violated the policy. The policy was distributed on August 16 and the next day, Brown talked to co-host Steve Tasker about what he saw at practice. The Athletic has a transcript of what was discussed, including specific positions of where players lined up and naming those who were being rotated with the starters. Those parts have been edited out of the episode that’s currently online.

After that Monday show, Brown was no longer at Bills practice, was off the show later in the week, and has been replaced with guest hosts since. Neither Brown or the Bills responded to The Athletic’s request for comment. He also hasn’t tweeted for a week.

Neither side would confirm the ban, but considering Brown remains listed on the team directory, that might indicate he has not been fired and will eventually return to his job.

It’s somewhat tricky to be a team reporter when the team is paying your salary. Obviously, you’re not going to throw your employer under the bus, but you are covering the team and fans need to be informed about situations that aren’t rosy. While there is an argument to be made that NFL teams banning reporters from reporting anything from training camp is going overboard and is just using the pandemic-forced closed practices as an excuse, someone who is being paid by the team should probably express some caution and not throw out potentially sensitive information on a team-run show.