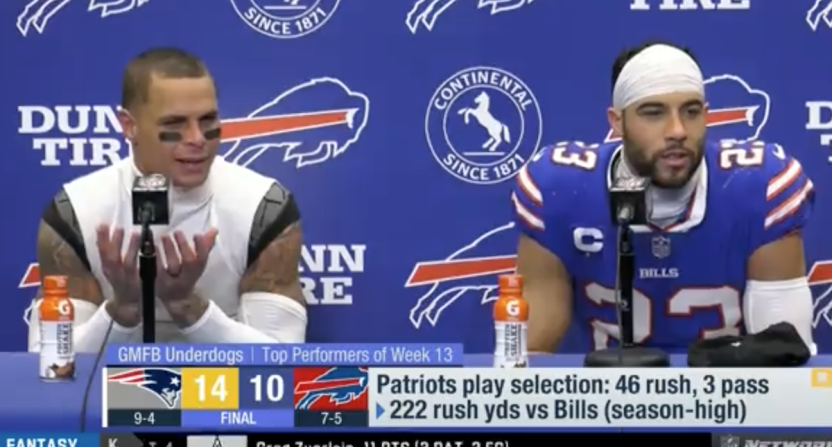 The Buffalo Bills took a tough 14-10 loss at home Monday night to the New England Patriots, falling to second place in the AFC East and the conference’s No. 7 seed. On a brutally windy night in Buffalo, the Patriots focused almost solely on running the ball with quarterback Mac Jones throwing only three passes.

During the postgame press conference, WIVB reporter Jerry Sullivan asked Bills safeties Jordan Poyer and Micah Hyde if it was “embarrassing” to lose against a run-heavy approach not utilized in decades. The idea that the Bills should be embarrassed by such a one-sided attack, by the Patriots running the ball almost entirely, angered the two players.

Poyer held out his hands in disbelief, asking “What kind of question is that?” Hyde replied “What are we doing, bro?”

Undeterred, Sullivan pressed the point further, asserting that media and fans who watched the national Monday Night Football telecast were likely to be critical of the Bills’ defense for losing when the Patriots did nothing but run the ball.

Jordan Poyer and Micah Hyde were not happy when asked if they were embarrassed by the run defence tonight. pic.twitter.com/5lwqZ8CRyh

Poyer and Hyde responded by saying that the Bills weren’t blown out in the game. They gave up 14 points, but only one touchdown. (New England added a two-point conversion and two field goals for its scoring total.)

For the game, Buffalo allowed 222 rushing yards on 48 carries. An average of 4.8 yards per carry does appear as if the Patriots ran the ball assertively. But it should be pointed out that 64 of those rushing yards came on one run by Damien Harris. Obviously, that can’t be subtracted from the total yards allowed.

But without Harris’s run, the Bills allowed 158 yards on 45 carries, an average of 3.5 per rush. Buffalo head coach Sean McDermott and defensive coordinator Leslie Frazier probably would’ve preferred a lower average, but that number doesn’t indicate the Bills’ defense was getting bulldozed by the New England running game.

As Micah Hyde was leaving the podium, he had this to say to WIVB reporter Jerry Sullivan, who asked the question about the Bills run defence. pic.twitter.com/Qigk975fzl

Before leaving the podium, Hyde told Sullivan and the media corps that asking if the Bills players were “embarrassed” was disrespectful.

“This feels like disrespect,” said Hyde. “It’s all about respect. I come here every single week and I answer your questions truthfully, honestly. I appreciate you guys. Don’t do that. Just don’t do that.”

Micah Hyde acts like he's doing the media a favor by coming out and answering questions after games. That's the problem with the current access during Covid. The media can't be in the locker room asking tough questions. Most players get to hide while "leaders" speak for the team.

The question that immediately comes to mind is whether or not Sullivan would’ve used the term “embarrassing” in a locker room setting, surrounded by other players who might respond to Hyde and Poyer’s indignation. But let’s presume that he would have, since the Bills getting pushed around was the premise of his inquiry.

Did Poyer and Hyde come off as overly sensitive? Perhaps, but they just suffered a disappointing loss and were likely angry over how that game developed? It’s also entirely possible that they knew that Buffalo didn’t lose solely because of its defense. The offense only scored 10 points despite driving the ball to the red zone four times. They converted only 4-of-13 third downs.

Bills were just 1-4 in red zone last night. Got into red zone each of their final 3 drives. Those produced a FG, missed FGA and turnover on downs

McDermott highlighted the Bills’ red zone struggles as a reason his team lost the game.

“I didn’t think we honestly took advantage of our opportunities tonight,” said McDermott (via the Buffalo News). “I honestly didn’t. The ball’s at the 40-yard line and we’re 1-for-4 in the red zone. We gotta figure that part of it out.”

But the Bills’ safeties weren’t going to lay blame on their teammates. Using a word like “embarrassing” understandably puts them on the defensive.

Had Sullivan phrased the question differently — “Are you concerned that the Patriots defeated you solely by running the ball?” for example — he might have gotten a better, more insightful response. It still would’ve been a tough question, yet without language that Poyer and Hyde took as insulting.