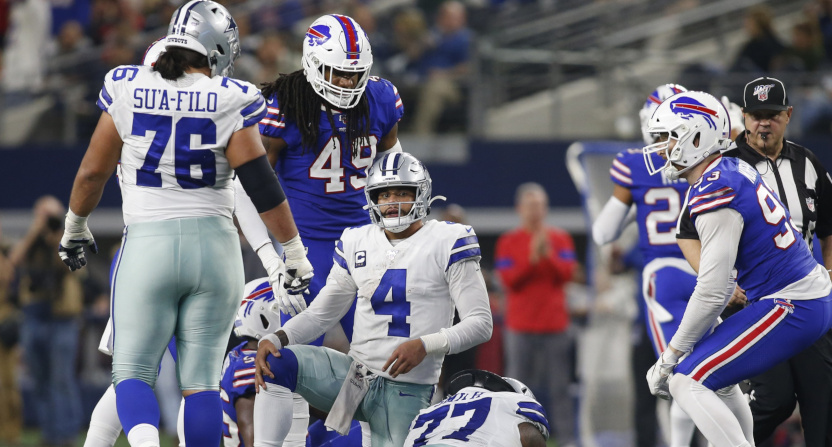 The ratings for the Buffalo Bills’ 26-15 Thanksgiving Day win over the Dallas Cowboys are in, and they’re spectacular. As per CBS, the game (which ran from 4:32-7:48 p.m. Eastern) drew an average of 32.538 million viewers, the best regular-season rating on any network in three years and the most-watched Thanksgiving Day game on CBS in 27 years:

The CBS release also mentions that this was a 22 percent rise over their Thanksgiving Day game last year (Chicago Bears-Detroit Lions, which averaged 26.610 million viewers), and a seven percent rise over the comparable window last year (Washington Redskins-Dallas Cowboys on Fox, which averaged 30.524 million viewers), all per Nielsen’s live+same day fast national ratings. Viewership of this game peaked with 35.453 million viewers  from 7-7:15 p.m. Eastern. And this wound up being the most-watched TV program of any kind since Super Bowl LIII in February, which was also on CBS and averaged 100.7 million viewers (including streaming).

(For what it’s worth, Fox’s earlier Thanksgiving Day game, Bears-Lions, also did all right. It averaged 27,283,000 viewers across all platforms, with 26,874,000 of those on Fox, and was the best early-window Thanksgiving Day game in four years. And NBC’s primetime game, Saints-Falcons, averaged 21.1 million viewers across all platforms. The 20.7 million viewers it drew on NBC was the best number for any network in Thursday primetime since the Sept. 5 Bears-Packers NFL kickoff game. )

This is the second remarkable rating for the NFL in two weeks, and the second involving the Cowboys. The 13-9 loss Dallas suffered against the New England Patriots tied a 2015 Seahawks-Cowboys game for Fox’s best rating since 1996 and averaged 29.47 million viewers; it was also the NFL’s most-watched regular-season game since last Thanksgiving and the most-watched non-Thanksgiving game since Patriots-Packers in 2014. So even though the Cowboys are just 6-6 on the year, they’re drawing incredible ratings.

And there may be more big ratings to come. That 6-6 record has Dallas atop the NFC East, but the Philadelphia Eagles are close behind with a 5-6 mark. So the Cowboys’ games down the stretch have plenty of playoff implications, and that could help further bolster the ratings.