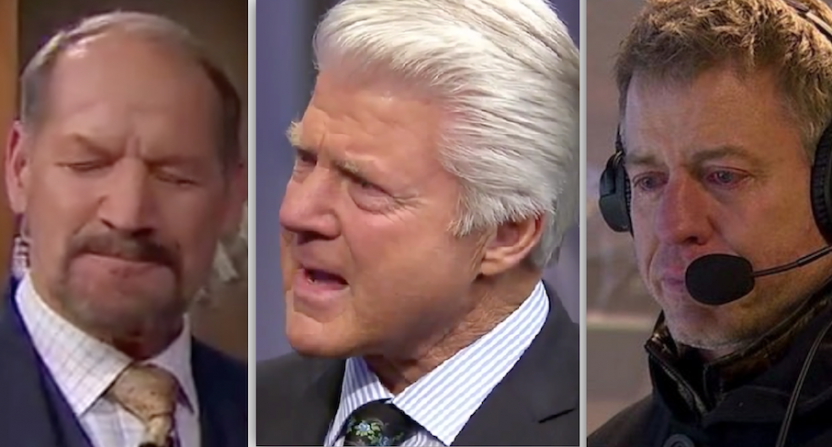 Seeing genuine emotion expressed following triumph is one of the many reasons we watch sports, right? It was just unexpected to see those pure reactions off the field during the NFL divisional playoffs this past weekend.

We also watch sports hoping to see the unexpected. (Well, maybe not if you’re a Baltimore Ravens fan…) Both CBS and Fox provided that with the announcements that their respective analysts had been voted into the Pro Football Hall of Fame, bringing viewers some genuine joy while they were taking a brief break from football.

During Saturday’s pregame show on CBS, Pro Football Hall of Fame president C. David Baker interrupted a segment with Bill Cowher and Phil Simms to tell the former Pittsburgh Steelers coach that he was being inducted into Canton.

The initial awkward surprise of a man walking onto the set during Cowher and Simms’ segment was quickly overtaken by the drama of Baker’s good news. The genuine emotion was apparent on Cowher’s face as he realized that he was being recognized as among the best in the history of his sport.

A further dose of reality came with Cowher’s wife and daughter coming out to the set to congratulate and celebrate with the coach, followed by the rest of the NFL Today crew joining in. Sure, the situation was set up by CBS producers but the result was real. How often do we get that on television now, especially with studio sports shows emphasizing hot takes, contrived fervor, and amped-up outrage?

Approximately 24 hours later, we saw another instance of this during Fox’s halftime coverage of the Seahawks-Packers game. As the Fox NFL crew was breaking down the first half, Baker again walked on to the set and broke into the segment (from New York to California) to tell Jimmy Johnson that he was going to the Pro Football Hall of Fame.

Legendary @dallascowboys coach @JimmyJohnson finds out live on TV he is the newest member of the Pro Football Hall of Fame! pic.twitter.com/GK3jlSlWRz

Once again, we had pure joy in the studio. Terry Bradshaw was effusive in his excitement. Michael Strahan grinned with delight. Jay Glazer came out to join in the celebration. And Tony Gonzalez was wiping tears away after Johnson said a few words to express his feelings about the announcement. Big, tough football guys overcome with emotion.

If it’s possible, Johnson’s big news felt even more special because Fox shared it with one of his former players who was also working on Sunday evening. Game analyst Troy Aikman, Johnson’s quarterback with the Dallas Cowboys, was watching the announcement on a monitor from Green Bay. And seeing tears well up in Aikman’s eyes made the moment resonate. Look at how much this honor meant to these men.

Iso-cam on Aikman. It looks like he was maybe surprised by it too? pic.twitter.com/NX9hpgDhFu

The reactions to the two Hall of Fame announcements seem even more heartfelt preceding Monday’s Academy Award nominations. Yes, there was probably genuine emotion from some of the nominees as they learned the good news — especially for those earning such honors for the first time or who actually didn’t expect to be recognized as among their industry’s best from the past year.

But Hollywood awards season is such a rehearsed chain of events. Most of the nominees have attended numerous dinners and ceremonies held by critics, directors, producers, and actors. They’ve had several opportunities to rehearse their acceptance speeches for a win or graceful acknowledgments after losing out. Many have been through such proceedings before.

It’s difficult to appear genuine under such circumstances. (Although Oscars fans hope for moments of sincere emotion and gratitude from the many award winners.) Although maybe it would feel different if David Baker walked into the room to tell Brad Pitt he was nominated for Best Supporting Actor.

What we saw on Saturday and Sunday from Cowher, Johnson, and their colleagues was anything but rehearsed. Yes, the settings were contrived. Producers, camera operators, hosts, and loved ones had to be informed of what was going to happen. And maybe some reactions were considered and practiced as a result.

Cowher and Johnson surely thought about how they would react to the good news. (And perhaps the two men, along with the viewing audience, were wondering how they hadn’t been inducted into the Hall of Fame already.)

But the emotions were genuine. It’s the sort of thing we hope to see when a quarterback throws a game-winning touchdown, when a receiver catches that pass, when a defensive player gets a pivotal sack or interception, when a coach finally gets the victory for which he’s yearned. It’s long-awaited affirmation.

How often do sports fans almost unanimously agree that something was just very cool, very special to watch? These surprise Hall of Fame announcements provided something arguably more memorable for everyone involved than the NFL playoff games this weekend. Winning doesn’t always happen in uniform. That’s why we watch this stuff.