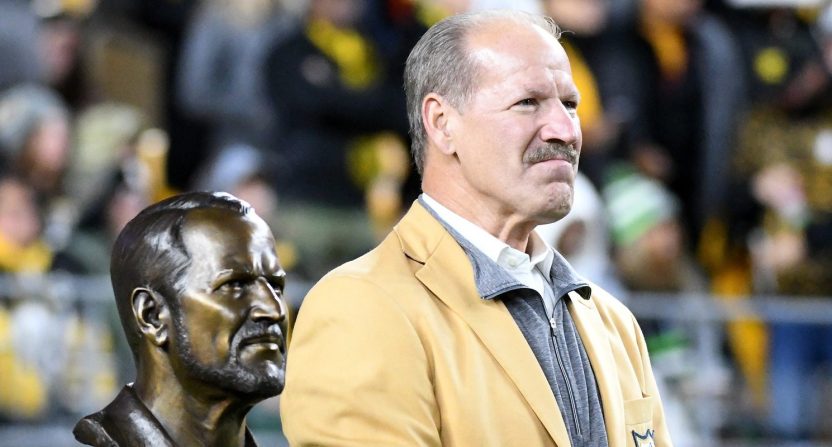 The Indianapolis Colts shocked the world when they brought in ESPN analyst Jeff Saturday as their interim head coach last week following the firing of Frank Reich. While Saturday had a remarkable playing career with the Colts  and had spent much of the last decade working on ESPN NFL studio coverage, his only previous coaching experience was in the high school ranks, making his hire an extremely unusual one that took criticism from media members both inside and outside of ESPN. Some particularly strong criticism came from former Pittsburgh Steelers coach turned CBS NFL analyst Bill Cowher on the network’s The NFL Today pregame show Sunday.

There, Cowher (seen above with his Pro Football Hall of Fame bust when he was honored by the Steelers last October) said he was “speaking on behalf of the coaching profession.” He said Saturday had previously been offered a Colts’ assistant job multiple times and had declined. And he said the way Saturday was hired over assistants already on staff was “a disgrace to the coaching profession.” But maybe the most notable thing Cowher said was that he considers that process here will still be bad regardless of the eventual outcome, saying “Regardless of how this thing played out, what happened in Indianapolis is a travesty.” Here’s video of his comments:

"For an owner to hire a coach who has never been an assistant at the college level or the pro level…its a disgrace to the coaching profession." – Bill Cowher on Jeff Saturday ? pic.twitter.com/lpbwqyXPS9

“It’s something that hits close to home, and I felt an obligation to speak on behalf of the coaching profession,” Cowher said on Sunday night. “I felt I needed to make a statement. Everyone (in the cast) was very respectful. Everyone had an opinion on it. But (“NFL Today” producer) Drew (Kaliski) was great about making that segment a little bit longer to allow some extra time. Being here for 16 years at CBS, the one thing I’ll say is they will give you the time to be able to express your thinking.”

“Devin McCourty is here straight from the locker room,” Cowher continued. “Nate (Burleson) isn’t long from coming off the field. We have a great opportunity to get a cross-section of opinions on how this may or may not play out. But the bottom line is, I’m the one coach that’s up here. I spent five years as a player, seven years as an assistant coach, and 15 years as a head coach. I have great respect for the coaching profession and understand all the things that go on when people lose their jobs. It’s never easy, but it’s part of a profession we get into. But there’s certain ways of doing certain things and commitments that people make that when things are not done properly, it needs to be pointed out. Regardless of how this plays, it was a travesty in terms of how this unfolded.”

It’s notable to see Cowher, on Sunday night (so presumably following the Colts’ 25-20 Sunday afternoon win over the Las Vegas Raiders), reiterate that his criticisms are about process, not results. Some media members have already been seen arguing that the ends justify the means here, and while that’s a bold take to state after a single five-point win over an even-worse team (the Raiders entered that game 2-6, while the Colts were 3-5-1), it’s one that could turn out okay if the team does go on a prolonged streak under Saturday. But even if they do, Cowher’s process criticisms still stand.

It is quite the message to send to hire someone not only without any high-level coaching experience, but to do so after they had repeatedly declined opportunities that could lead to a role like this, and to pick them over coaches who already had NFL experience and had already committed to the team this year. Colts’ owner Jim Irsay can obviously hire who he likes within the rules of the NFL (especially in this situation, as the official Rooney Rule requiring at least an interview of a minority candidate doesn’t apply to interim coaches), and he certainly did in this case, reportedly overruling advice from team executives. Perhaps that decision will work out with on-field results (although it’s impossible to truly judge against how a different candidate might have done), or perhaps it won’t. But criticism of the process of that hire works in either circumstance. And it’s interesting to hear Cowher expand on why he felt that was the angle he needed to take here.