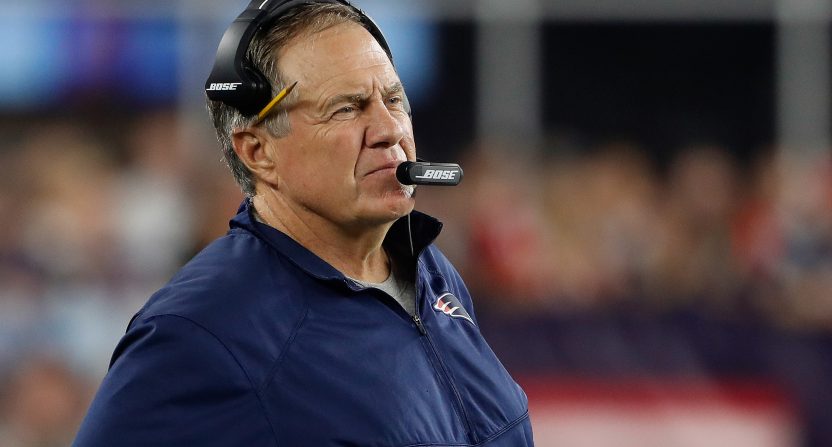 Bill Belichick has been accused of using some dubious methods of scouting rival NFL teams in the past. While he gets pretty quiet when it comes to discussing those instances, he’s happy to tell you about the very obvious and easy ways he also scouts his opponents.

While HBO’s Hard Knocks has been around for some time, this year was the first instance of Hard Knocks In Season featuring the Indianapolis Colts. There was always a concern that the Colts would be giving upcoming opponents a peek behind the curtain or accidentally reveal some of their game plans without realizing it.

That’s what Bill Belichick was certainly hoping for.

The New England Patriots coach spoke with the media earlier this week as he began prepping for the upcoming game against the Colts this Saturday. When asked about whether or not he’d be using Hard Knocks as part of his game-planning, the six-time Super Bowl winner confirmed as much.

“Yeah, we have somebody that studies each team,” Belichick said Monday. “Whether it’s any relevant comments or information that we think’s relevant to the preparation for the team, then that could be shared, sure.

“We have people in our organization that scout the games in advance of when we play a team. So, starting two or three weeks before we play them, they start to really track those teams and see how injuries have affected (them) or if they have shifted their style of play or whatever’s happened with the team. We track most everything any team that we play does, and then depending on the relevance or the importance of that information, then at some point, it gets relayed down the line.”

Belichick wouldn’t be the first NFL coach to make adjustments based on something they overheard. During the first episode, head coach Frank Reich noted that Jacksonville Jaguars coach Urban Meyer made an “interesting” comment during his press conference about their defensive scheme. Reich took that into account when planning for Indianapolis’s 23-17 win over Jacksonville the following week.

Belichick was also asked if he’d ever want the Patriots to take part in Hard Knocks, something they’ve never done.

“There’s a lot of reasons I wouldn’t be excited about it.” — Bill Belichick, when asked about “Hard Knocks” and if he would be cognizant of other teams watching it to scout the Patriots if they were the featured team pic.twitter.com/8RAhqNSVjP

“There’s a lot of reasons I wouldn’t [be] excited about it,” Belichick said.