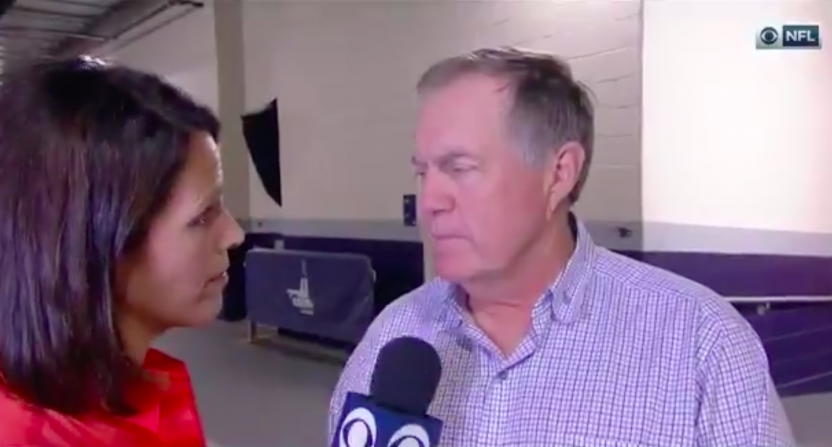 Depending on who is doing the talking, Bill Belichick’s way of dealing with reporters can be described in many ways. He can be described as combative, reluctant, rude, adversarial, dickish, hostile, impatient, terse, testy, irritated, petty, grumpy, and antagonistic. His curt answers and various deflections can seem admirable in some circles and childish in others.

That style has been on full display ever since the New England Patriots signed Antonio Brown a couple of weeks back. Belichick deflected questions about the controversial wide receiver for as long as he could and has downplayed his interest in reporter questions about him as Brown was slapped with multiple sexual assault allegations, a civil lawsuit, and was eventually cut by the team. In the days since, Belichick has been even more tight-lipped about Brown, if that were possible.

CBS Sports reporter Dana Jacobson caught up with Belichick for a quick interview before the Pats’ game against the New York Jets on Sunday. While the mundane interview played out as most pre-game chats do, Jacobson did manage to get one question about Antonio Brown in, as any self-respecting reporter would be expected to. Pretty much anyone watching at home would have expected Jacobson to ask a question as well. In fact, the only person in the world who seemed to disagree with this assessment was Belichick himself, who provided a terse “we’re focused on the Jets today” response before giving Dana a lingering death stare that was hard not to translate.

It would be perfectly reasonable for Belichick to have answered the question, “what was the final straw with Antonio Brown?” by saying something like, “we don’t condone allegations of violence against women” or even “we’re not interested in being a part of a media circus.” There are plenty of reasonable, quick responses that any adult public figure could have given to satisfy the needs of his situation. And it’d be a great way to send a message that there are certain things that simply aren’t tolerated in his profession and in the NFL (even though the Patriots happily let Brown suit up for them after a rape allegation, but we digress).

Alas, Belichick would rather be a big baby about it and hide behind being A Football Guy. Because A Football Guy only talks about Football and doesn’t have time to talk about anything else in this world. It’s very convenient and it’s worked pretty well for him so far.

Of course, there’s also the fact that if Bill Belichick didn’t want to have to answer questions about Antonio Brown, maybe he shouldn’t have signed Antonio Brown in the first place. And as you can imagine, plenty of people were quick to point out that Belichick could have dealt with the situation in any number of ways but chose the most dickish one possible.

It is Belichick’s tough guy staredown of Dana Jacobson that I find particularly weak. He is in a position of power and it is a really bad look. (Oooh, Bill, you are really tough staring her down)

Belichick is such a petulant child. @danajacobson asked an important question and did it respectfully. pic.twitter.com/OLztPygYwF

if you don’t want to answer questions about why you cut a controversial player, maybe don’t sign that player?

Bill Belichick, the coach & GM of the Patriots, and highest paid coach in all of American sports, is just utterly indignant that there might be a question about the lunatic he signed to play WR & then had suit up a game after being accused of rape. https://t.co/K9TB12zJh2

Dana did her job. This is what you get paid to do as a journalist. Those in power have to be held accountable. It’s fine if he chooses not to answer the question. That stare was weak and unprofessional. https://t.co/5kGySyTTgs

Bill Belichick also gave Antonio Brown a contract, so he can keep getting his feelings hurt for 14 more weeks https://t.co/hs7ZR3alCp

If Belichick expects the Antonio Brown questions to stop coming, he’s probably in for a rude awakening this season. Especially if Antonio Brown keeps going on Twitter rants like this morning.