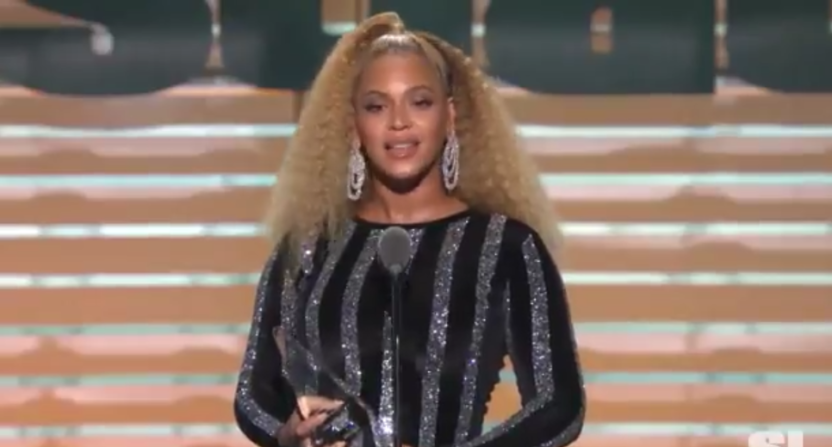 Colin Kaepernick received the Sports Illustrated Muhammad Ali Legacy Award Tuesday night, and did so from a surprising presenter; Beyoncé. The music star had quite the tribute for Kaepernick:

“Thank you, Colin Kaepernick. Thank you for your selfless heart and your conviction. Thank you for your personal sacrifice. Colin took action with no fear of consequence or repercussion, only hope to change the world for the better. To change perception, to change the way we treat each other, especially people of color. We’re still waiting for the world to catch up. It’s been said that racism is so American that when we protest racism, some assume we’re protesting America.”

Kaepernick later took the stage and gave a speech of his own:

'With or without the NFL’s platform, I will continue to work for the people'@Kaepernick7 receives SI's Muhammad Ali Legacy award #Sportsperson https://t.co/3wqaUVYZnf pic.twitter.com/dKJNX0d8vi

As noted when SI announced this award for Kaepernick in the first place, he’s going to be a controversial pick here. But that’s perhaps fitting for an award given in honor of Ali, and one selected with help from Ali’s widow Lonnie. Here’s what she said about the award when the selection was announced:

“I am proud to be able to present this year’s SI Muhammad Ali Legacy Award to Colin Kaepernick for his passionate defense of social justice and civil rights for all people. Like Muhammad, Colin is a man who stands on his convictions with confidence and courage, undaunted by the personal sacrifices he has had to make to have his message heard. He has used his celebrity and philanthropy to benefit of some of our most vulnerable community members. I know the Ali family joins me in congratulating Colin as he receives the 2017 SI Muhammad Ali Legacy Award.”

Kaepernick’s full speech can be seen when the awards are televised by NBCSN Friday. Other awards include J.J. Watt and Jose Altuve sharing the Sportsperson of the Year, plus Carlos Beltran winning the Hope Award and Maya Moore earning Performer of the Year.