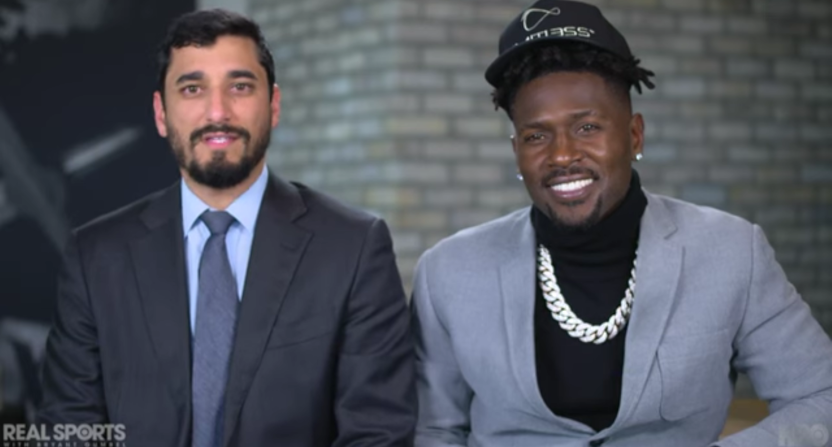 After Antonio Brown ran off the field shirtless in a Jan. 2 game and was cut by the Tampa Bay Buccaneers later that day, there’s been lots of back-and-forth between Brown and the Buccaneers’ organization (including head coach Bruce Arians) about just what happened. The latest step in that is Brown appearing on an episode of HBO’s Real Sports With Bryant Gumbel that’s set to premiere Tuesday night at 10 p.m. ET/PT, doing so alongside his lawyer Sean Burstyn (seen at left above with Brown, Burstyn has previously released statements from Brown disputing the Buccaneers’ version of events), and telling Gumbel they might sue Arians for defamation.

Here’s a sneak peek of that segment:

The most interesting part of that clip is Brown saying the Bucs offered him $200,000 “to go to the crazy house.” That starts around 1:35 in the clip:

ANTONIO BROWN: Yeah, these guys at Tampa Bay Bucs tried to make an agreement with me to give me $200,000 to go to the crazy house so these guys could look like they know what they’re talking about.

SEAN BURSTYN: The off– the offer was Antonio would basically sit on the sidelines, go on some list– and commit himself to some form of intensive mental health treatment. And we were specifically told, in writing, by the general manager, twice, “Don’t spin this any other way.”

Outside of that clip, HBO provided some further quotes from the full segment, including Brown calling Arians’ comments a “flat-out lie,” Burstyn saying they have evidence refuting Arians’ comments, and discussion of a possible lawsuit. Here’s the part on that lawsuit:

BRYANT GUMBEL: Are you suggesting–that a defamation lawsuit is– is possible?

BRYANT GUMBEL: Your figures, give me a number.

There is obviously a large difference between “defamation comes to mind” and actually filing a defamation lawsuit, and there’s no guarantee that one will ever be filed in this case. And it’s worth pointing out that the U.S. has a very high “actual malice” standard (relative to many other countries) to meet in defamation cases, especially in those cases involving a public figure (which Brown likely is, as per Curtis v. Butts, another sports case). With that said, the actual malice standard may be easier to meet for a coach than for a news organization; the coach is presumably operating off firsthand information rather than information gained through reporting, so the often-seen news organization defense of “We had no reason to believe this information from a source was false” would not apply.

At any rate, it certainly would be interesting to see Brown launch a defamation case against a current NFL coach and/or team. And there might be some very interesting information that could come out there on numerous fronts, including those specific alleged messages to Brown and his camp from Bucs’ GM Jason Licht, possible past messages between that camp and Licht and/or Arians, and maybe even information on previous controversies such as the saga of November reports about Brown being accused of looking to obtain a fake vaccination card and being suspended for three games by the NFL. (However, this is also a reason why a defamation case might not actually be launched; Brown would certainly open himself up to some discovery if he did that, and that might not wind up great for him.) We’ll see if anything actually comes of this, but it’s notable that Brown is still talking about what happened with the Bucs, still disputing the truth of comments from Arians, and now threatening legal action.

Brown’s interview with Gumbel will air on Real Sports, which premieres on HBO at 10 p.m. ET/PT Tuesday and can be streamed on HBO Max.