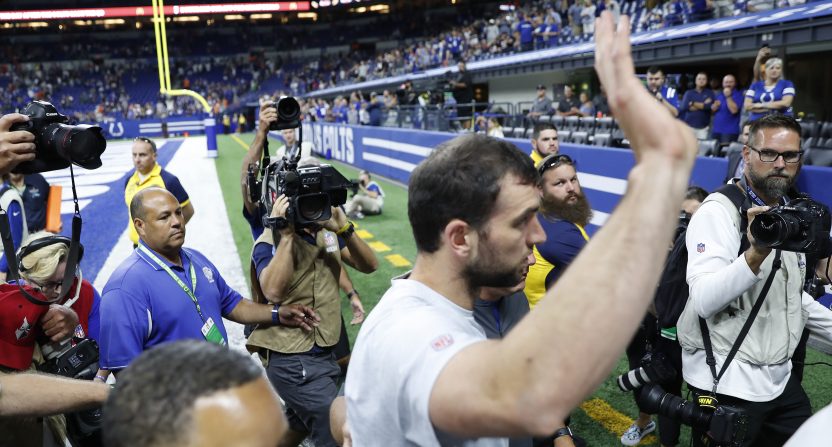 Despite the news being broken on a Saturday night, the Andrew Luck news cycle has continued on into Monday morning’s slate of sports radio and television broadcasts.

But when the Luck news broke on Saturday night, a handful of awful takes from prominent sports media personalities made their way onto Twitter. Predictably, they received backlash from not only fans, but also their own coworkers.

After Fox Sports Radio host Doug Gottlieb stupidly called Luck’s retirement “the most millennial thing ever”, NFL on Fox lead analyst Troy Aikman eviscerated Gottlieb, calling his take “total bullshit” and wondered if inane takes like that kept him employed on FS1. It might be the most genuine example of “Embrace Debate” Fox Sports has ever produced.

I got a bit of a laugh when Gottlieb tried to defend his take by comparing Luck’s situation to Alex Smith trying to come back after a horrific leg injury that could’ve either ended his career or even resulted in him losing his leg. Despite comparing apples and oranges, the 35-year old Smith is also considered a millennial, for whatever that’s worth.

At the same time, ESPN’s Dan Dakich was critical of Luck quitting on the Colts and being tired, pointing out that people in his family are steel mill workers, cops, and teachers and are all making less money than Luck.

On Golic and Wingo, both Trey Wingo and Mike Golic took issue with Dakich’s comments. Wingo brought up Dakich’s time at the University of West Virginia, telling Dakich to “clean your own backyard and deal with your own garbage before you come at someone else” in a clip that ESPN frantically scrubbed from Twitter.

Dakich fired back, noting that the New York Times article cited by Wingo also contains his justification for leaving West Virginia so soon (allegedly, a threat from then-WVU president David Hardesty to “destroy” Dakich after a freshman on WVU’s basketball team alleged he was still owed money by someone connected to the school).

Because I left West Virginia diue to the President of the University threatening “to destroy “ me and my wife? Hey @GolicAndWingo especially @wingoz quit being lazy and read @PeteThamel NY Times article on what really happened…my backyard is filled with integrity .clean yours https://t.co/PefHgJ30be

The best explanation about the entire Andrew Luck situation probably came from Mike Golic Jr. This encapsulates the entire concept of sports and sports fandom.

“We get mad at people for having jobs that society chose to value. Like Andrew Luck gets paid a lot of money, fans always want to make that argument, ‘I pay your salary.’ No, but you choose what’s valued and what’s not. And if you showed up in stadiums to watch people teach math, or showed up in stadiums to watch people mine coal, they would pay those people a lot more money. But you show up to watch football players play sports. And so that is where people spend money and that’s why these salaries are so high.”

Is it Andrew Luck’s fault that he got paid tens of millions of dollars to play a game, or is it our fault for putting him, and other athletes, on so high a pedestal that we get angry when they make personal decisions we don’t like? If Andrew Luck was a tech billionaire and retired because he was burned out, no one would care. Why should him walking away from his job as an athlete be any different?