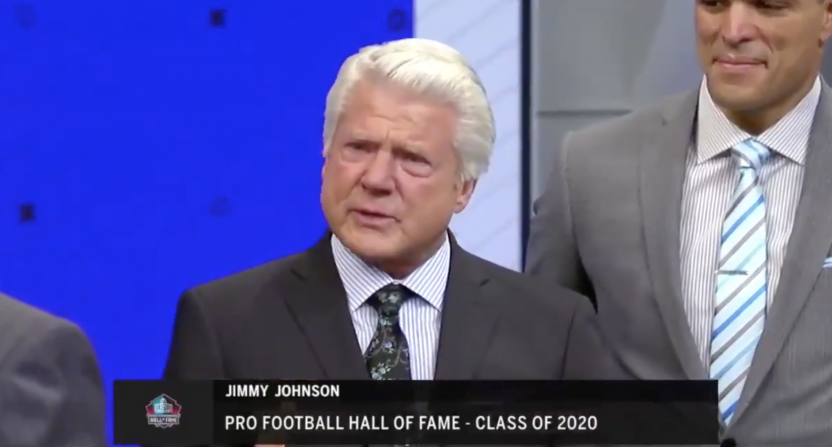 On Saturday night, CBS surprised former Steelers head coach Bill Cowher that he will be inducted in the Centennial Class of the Pro Football Hall of Fame. During halftime of the Seahawks-Packers game, it was Fox’s turn to surprise one of their own as Pro Football HOF President David Baker surprised former Cowboys head coach Jimmy Johnson and telling him he will be inducted into the Hall of Fame.

Legendary @dallascowboys coach @JimmyJohnson finds out live on TV he is the newest member of the Pro Football Hall of Fame! pic.twitter.com/GK3jlSlWRz

This was a bit less of a surprise than Cowher’s announcement the night before but it was still a great moment. In an emotional speech, Johnson gave thanks to his assistant coaches and players who got him to Canton.

In a nice touch by Fox, a camera caught Troy Aikman’s reaction as he saw his coach find out he would enter the HOF. The look of pride and emotion in Aikman’s face says it all.

A look at @TroyAikman's reaction to his former coach @JimmyJohnson joining the Hall of Fame. #FootballIsFamily pic.twitter.com/8Y8Go8wIni

Johnson was one of the most successful head coaches in the 90s. Turning around a Cowboys team that began that was 1-15 in his first year, Johnson built his team around Aikman, Emmitt Smith, and Michael Irvan and turned the Cowboys into a dynasty in the first half of the decade. A two-time Super Bowl champion, the Cowboys won a third in four years largely with Johnson’s players and it wasn’t long after that where the Cowboys fell from the top and haven’t returned.

More inductees will be announced this Wednesday. Being inducted into the Pro Football Hall of Fame is an honor for anyone who devoted their career in the game. For people like Bill Cowher, Jimmy Johnson, and the rest of the class, whether you find out in front of millions of people or at home with family, knowing you will be inducted is a special moment and one they will never forget.