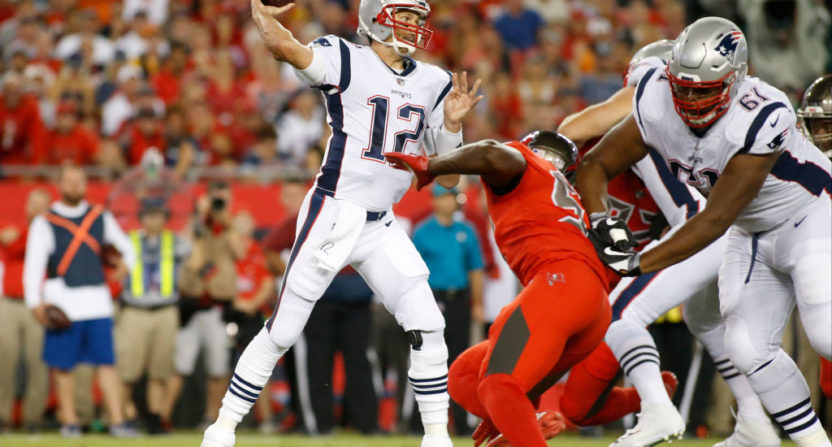 As Amazon continues its 2017 season experiment as a National Football League partner, it saw a drop in total viewers for its Week 5 game between the New England Patriots and Tampa Bay Buccaneers.

Even the game viewership went down, 1.6 million for Bears-Packers and 1.5 million for Pats-Bucs. But Amazon did get some good news for last week’s game.

The average worldwide audience that watched for at least 30 seconds for Pats-Bucs last week went up from the Bears-Packers game. The average audience for last week was 391,000 as compared to 372,000 from the inaugural stream.

In addition, Amazon received the biggest audience of those watching online. Other platforms that streamed the game included the NFL Mobile app for Verizon Wireless subscribers, Watch NFL Network, NFL app on Microsoft Windows, NFL Game Pass and the CBS All Access app. Overall, the combined average online audience was 525,000, so most of the online viewership was through Amazon.

It’s too early to tell if this is going to be a trend or just a one week aberration. Amazon will stream Philadelphia-Carolina tonight, and we’ll see how that turns out. Amazon is hoping that with the matchup of two NFC division leaders, it will draw a bigger audience than last week and it can build some upward momentum from there. It’s also worth noting that the company has multiple revenue streams here; they’re not just dependent on viewers and ads, but can also make money by selling viewers NFL-related products.

Overall, Amazon will stream 11 games from CBS and NBC under the Thursday Night Football package, and pay $50 million for it. Games that will air on NFL Network exclusively are not part of Amazon’s contract.