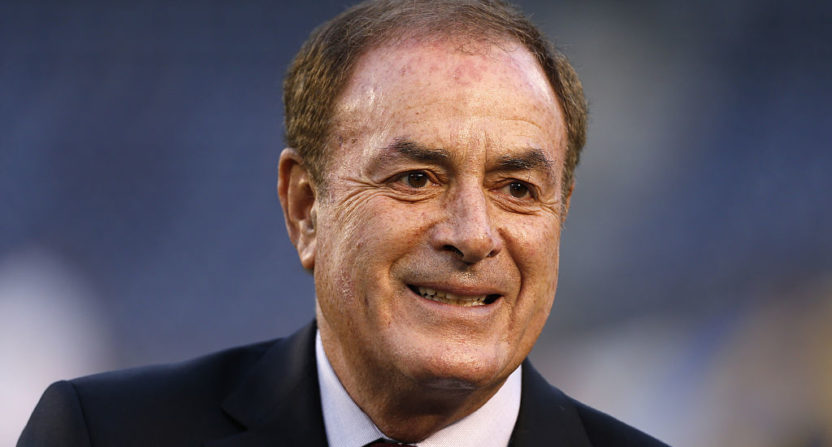 There’s been plenty of discussion of reasons for the NFL’s ratings decline this year, and much of that has centered on protests during the national anthem, with NBC Universal chairman of advertising sales and client partnerships Linda Yaccarino in particular saying earlier this month she thinks those protests have impacted ratings. NBC Sunday Night Football broadcaster Al Michaels appears to agree, and also said that President Donald Trump’s September “son of a bitch” comments on the protesters made protests a much bigger deal.

Michaels spoke to Philly.com’s Rob Tornoe ahead of Sunday’s Eagles-Cowboys tilt on a variety of topics, but his most notable remarks touched on those protests:

“It’s number one and it’s getting bashed because the ratings are down,” Michaels said. “Two or three years ago, the ratings were so spectacular that there had to be a little bit of a diminishment at some point.”

Michaels cited players’ protests against racial injustice during the national anthem as one of a myriad reasons ratings might be down. His comments echo remarks made by NBCUniversal advertising executive Linda Yaccarino, who noted earlier this month that she thinks the protests have affected the ratings. Yaccarino also said “a list of advertisers” have made it clear they’ll pull out of Sunday Night Football if the broadcast continues to cover protests.

Michaels said it felt like tension over the protests was starting cooling down, until President Trump weighed in during a September rally in Huntsville, Ala., where he called on NFL owners to fire players who decided to protest while the national anthem was being played.

“Once the president made those remarks in Alabama, at that particular point it was like throwing a match into a gas tank,” Michaels said. “During the off-season, both sides just have to sit down and figure out a way to make this a situation where it doesn’t overwhelm the conversation about the NFL.”

Michaels likely isn’t wrong on Trump’s comments really kicking up that fire, as the number of players who knelt or raised fists during the anthem skyrocketed in the wave of those remarks. (It’s perhaps notable that Michaels is a long-time Republican donor, but has said he doesn’t like political commentary during broadcasts.) Whether that’s the main cause of the ratings declines (which have been across most NFL broadcasts, not just SNF) or not can be debated, as there are plenty of other problems for the NFL, from oversaturation of games (which even CBS Sports chairman Sean McManus now says is an issue, not long after he said it wouldn’t be when they added more Thursday Night Football games) to a poor on-field product (exacerbated by numerous injuries to star players, which some have also blamed on rising numbers of short-rest games).

But there have been plenty of reasons cited by some all over the political spectrum for boycotting the NFL or reducing the amount of NFL content they watch, whether that’s about protesting the continued unemployment of Colin Kaepernick, protesting the protesting players, or just protesting that protests are still a hot-button issue. Michaels is smart not to blame protests entirely, and he also makes a valid point that SNF (and NFL in general) ratings are still very strong overall and were probably set for a bit of a decline after hitting amazing highs a few years back, but he’s not wrong that some may be tuning out because of the way protest talk has “overwhelm[ed] the conversation about the NFL.” We’ll see if that continues to be the case going forward.