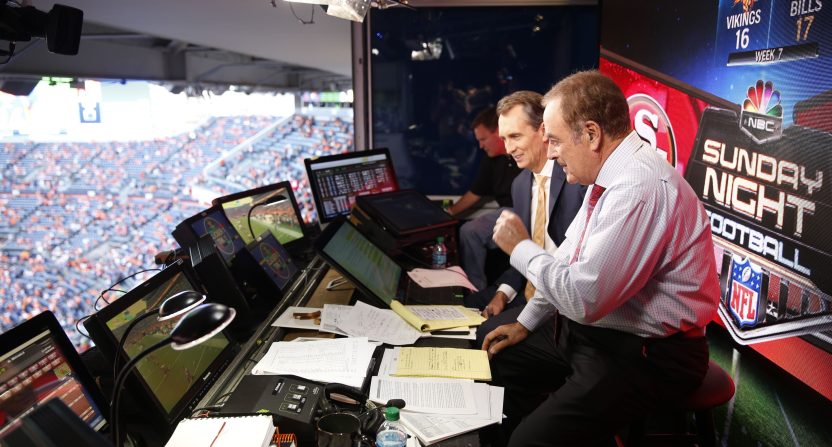 During Al Michaels’ legendary career, he’s done just about everything in the sports broadcasting world. He’ll call yet another Super Bowl, his 11th as play by play broadcaster, in a week and a half from Los Angeles, and Michaels talked with the LA Times about his memories of previous Super Bowls he called and attended.

One memory comes from Super Bowl XXV more than 30 years ago. This game took place soon after the start of the Gulf War’s Operation Desert Storm, and security at the Super Bowl was quite high. Michaels recalled just how intense the security process was, with a SWAT team meeting him and broadcast partners Dan Dierdorf and Frank Gifford prior to the game.

My second Super Bowl was in Tampa [Fla.] three years later, just days after we had gone to war with Iraq in Operation Desert Storm. Security was tight — it was the first time I can remember concrete barriers encircling a stadium. We weren’t allowed to fly a helicopter, a small plane or a blimp above the stadium, so our aerial shot was taken with a telescopic lens atop a hotel about a half-mile away.

The night before the game, Dennis Swanson told Frank, Dan and me that SWAT team members wanted to meet with us. They wanted us to know what we were supposed to do if terrorists invaded the broadcast booth and took the three of us hostage. Seriously. It was all I could do to suppress a laugh. I walked out with Dan, who said, “Whoa, that was really something.” Then I looked at my partners and said: “Guys, you know what this is about? In the guise of protecting us, all these characters are looking for is a way to get into the game with a 50-yard-line vantage point for free.” To which Frank responded — “1,000%!” The Giants beat the Bills 20-19 when Scott Norwood missed a 47-yard field goal at the end.

This level of security during a live sports event seems about standard these days, but the SWAT briefing seems a bit over the top.