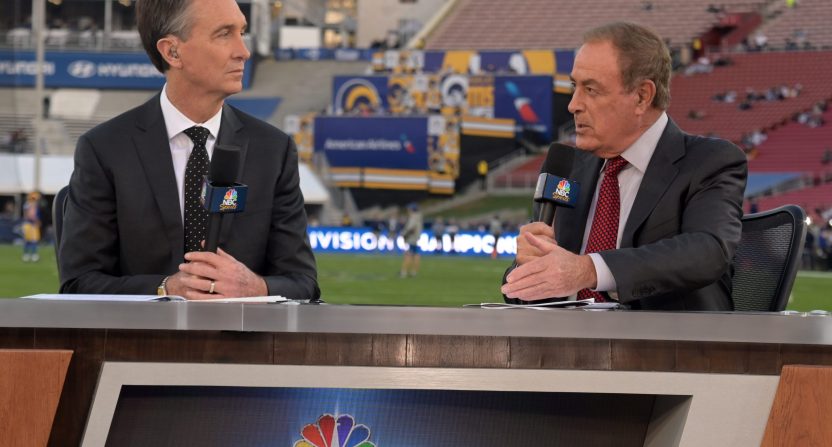 Al Michaels and Cris Collinsworth began their Sunday Night Football partnership on NBC in 2008. If Super Bowl LVI was their last game together, it ends a successful run. Their chemistry was on display throughout the Los Angeles Rams’ 23-20 win over the Cincinnati Bengals. As opposed to a three-man booth where analysts have to work together to get points across, Collinsworth and Michaels forged a conversation and gave each other the breathing room that make them one of the best announcing teams in any sport.

With rumors abound that Michaels is going to head either to Amazon (to call Thursday Night Football) or ESPN (to return to Monday Night Football), Al gave a hint that Super Bowl LVI might be his last game for the Peacock when he called for Collinsworth to “come slidin’ in here for one final time.”

NBC’s replays were spot on. Angles on the Rams’ botched extra point in the first half clearly showed the snap to holder Johnny Hekker slip out of his hands. In addition, on a Bengals’ trick play in the first half that had running back Joe Mixon throw a touchdown pass to Tee Higgins, Michaels had the right call and Collinsworth broke down the play using the crisp replays from the production truck led by producer Fred Gaudelli and director Drew Esocoff.

JOE MIXON THREW A TD IN THE SUPER BOWL. #RuleItAll

The @Bengals have found the end zone. #RuleItAll

When the Bengals scored to open the second half on a 75-yard touchdown pass from Joe Burrow to Higgins, it appeared that defender Jalen Ramsey fell down.

Burrow to Higgins for 75 yards and the @Bengals have the lead! #RuleItAll

However, NBC found multiple replays that showed Higgins actually pulling Ramsey’s facemask and throwing him aside, which should have been offensive pass interference. This would have been a perfect time to bring in rules analyst Terry McCauley, but as with the rest of the game, he wasn’t utilized much at all.

Nothing to see here, move along pic.twitter.com/0nZBtTCDOX

That’s because there weren’t many penalties all night. There were flags thrown on consecutive plays in the final two minutes of the Rams’ winning drive, including a suspect holding penalty on the Bengals where both Collinsworth and Michaels questioned the validity of the call.

This was the call that Bengals fans will be upset about for a long time pic.twitter.com/8dzOKrDFZE

As the defenses took over the game (especially the Rams), Collinsworth was able to show the failure of the Bengals’ offensive line as Burrow was repeatedly sacked, seven times in total. While unpleasant to watch, NBC even offered an important replay angle of Joe Burrow’s apparent knee injury, capturing him screaming in pain immediately after the awkward hit.

Joe Burrow screamed in pain after getting hit on that last play pic.twitter.com/oMx89dBxLl

As an analyst, Collinsworth is paid to second guess calls, but he made several correct first guesses, including a Joe Burrow run on fourth down in the third quarter. Michaels was only happy to give him credit for predicting the run.

With the game tight throughout, Michaels and Collinsworth did not have to go into blowout mode, staying on the strategy of the coaches.

As with previous Super Bowls, NBC used the Big Game to launch a new scorebug and graphic package. Compared to the previous scorebug, this new version was cleaner and less cluttered. It certainly looked better than a leaked version that came out earlier in the week. The graphics were also cleaner and made for a better look on the screen.

During the pregame coverage, NBC gave time to some of the NFL’s bigger stories, including the Brian Flores lawsuit. That lawsuit was even mentioned by President Joe Biden during the traditional Super Bowl presidential interview segment. Insider Mike Florio broached the potential of Washington Commanders team owner Dan Snyder being forced out of the league after new allegations of sexual misconduct.

Mostly, though, the pregame was used to heavily promote NBCUniversal’s cable programming, Peacock, and of course the Olympics. (Running concurrently to the Super Bowl for the first time, leading to a whirlwind week for Mike Tirico.)

After the game, Michaels paid tribute to sideline reporter Michele Tafoya who is leaving sports television to pursue other endeavors. Michaels left his future open, but gave partner Collinsworth a fist bump on what appeared to be the end of their 13-year partnership.

Related to career changes, the departing Tafoya asked Rams’ defensive tackle Aaron Donald if this was his last game and while he got emotional, he didn’t bite on the question.

If this is the final game for Michaels and Collinsworth, they went out on top. This likely would be the last Super Bowl for 77-year-old Michaels. NBC’s next turn in the rotation would be in 2026; Amazon obviously isn’t a factor in Super Bowl coverage, and even if he somehow landed at ESPN/ABC, their first Super Bowl opportunity won’t be until 2027. Even as good as Michaels was last night, it feels unlikely that he’ll still be calling games at that point. (Though if anyone can, it’s him.)

As this was his 11th Super Bowl broadcast tying him with Pat Summerall of CBS and Fox, Michaels has proven that he can still rise up to the occasion, set the right mood and set up his partner for success.

Overall, NBC’s production gets an A and Michaels and Collinsworth also get a solid A.

So ends another NFL season, one of the biggest properties in media culminating with the biggest night on television. If you’re wondering: it’s Fox’s turn for the Super Bowl next year.