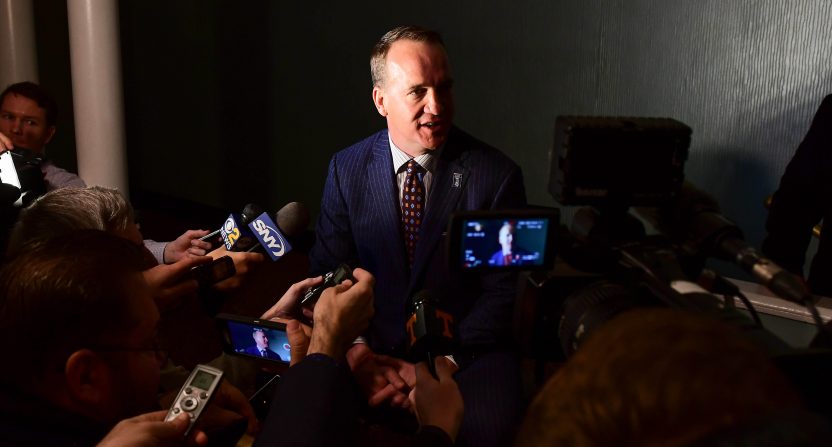 Two and a half years have passed since an Al Jazeera documentary reported that athletes including Peyton Manning, Ryan Zimmerman, Ryan Howard and James Harrison had received shipments of HGH, and although the claims didn’t exactly stick, the lawsuits attached to them did.

On Friday, The Hollywood Reporter revealed that, in court papers filed as part of Zimmerman and Howard’s defamation suit against Al Jazeera, the network claimed Manning had confirmed the allegations made against him by pharmacist Charlie Sly. Via THR:

According to memorandums from Al Jazeera, [reporter Deborah] Davies contacted Manning’s CAA agent Tom Condon before the documentary aired to get comment on something that Sly had been recorded saying. Specifically, Sly stated, “I did part of my training at the Guyer Institute which is like this anti-aging clinic in Indiana. [Peyton Manning] and his wife would come in after hours and get IVs and s***. … So one thing that Guyer does is he dispenses drugs out of his office, which physicians can do in the United States it’s just not very many of them do it. … And all the time we would be sending [wife] Ashley Manning drugs. Like growth hormone, all the time, everywhere, Florida. And it would never be under Peyton’s name, it would always be under her name. … We were sending it everywhere.”

“In their communications with DWT, the Mannings’ lawyers confirmed much of what Sly had said,” states unsealed court papers, although what was exactly said by Olson remains redacted.

Manning vehemently denied the allegations against him at the time but ultimately decided not to sue Al Jazeera. Sly, the main source in Al Jazeera’s documentary, recanted his story, saying he had made up the claims entirely. The Washington Post reported that Manning had launched a private probe into Sly and that private investigators had showed up to the pharmacist’s parents’ home before he recanted.

The Al Jazeera investigation never fully captured the national attention, presumably because of Howard and Zimmerman’s lawsuit, Manning’s furious denial and Sly’s recantation. In the years since, the claims have essentially disappeared from public consciousness. The claims against Manning would, however, seem much more legitimate if, as Al Jazeera claims, he and his agent confirmed them.

Upon The Hollywood Reporter’s report Friday, a spokesman for Manning reportedly issued the following statement, denying that the quarterback’s camp had confirmed Al Jazeera’s report:

Al Jazeera America shuttered in April 2016, three and a half months after the documentary that included the claims against Manning, Zimmerman, Howard and others.