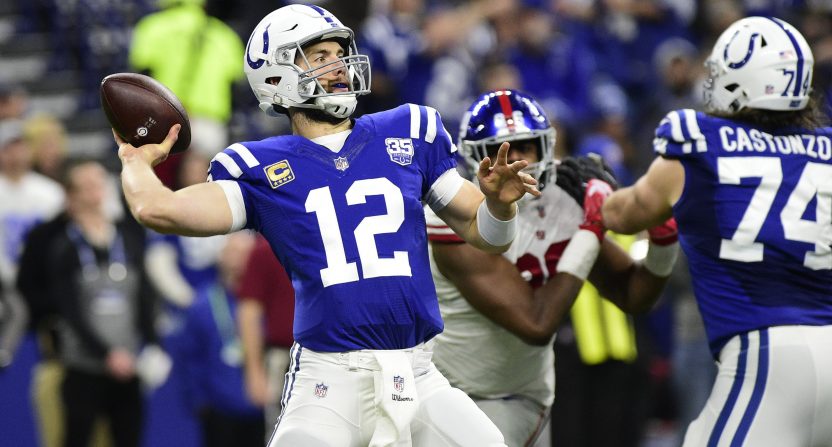 Indianapolis Colts’ quarterback Andrew Luck’s retirement at 29 has produced a lot of drama, from some sports radio personalities offering stupid takes to those personalities getting dunked on by their own coworkers. But maybe the most interesting element of this from the media side came with the criticism ESPN’s Adam Schefter received for breaking the story Saturday night, with many arguing on Twitter that he was ruining Luck’s planned retirement presser Sunday. In a piece published Monday, Richard Deitsch of The Athletic spoke to Schefter about that story (which Schefter filed to the ESPN news desk Saturday night while at his mother-in-law’s surprise 75th birthday dinner at a restaurant in Piermont, New York), and Schefter had a particularly interesting comment that the Colts were aware of Luck’s plans earlier in the week and even considered holding Luck’s farewell press conference Friday, ahead of Saturday’s preseason game against the Chicago Bears.

What’s amazing about it is that the Colts’ brass had a discussion earlier in the week and considered holding Luck’s retirement press conference Friday or Sunday at 3 pm. They decided on Sunday, but some in the Colts’ inner circle worried that word would slip out before then. Frankly, it’s surprising that the information held up as long as it did, especially in this day and age. They did a great job keeping a secret.

The criticism of Schefter for breaking that story Saturday night is interesting in the first place, as it falls into the general category of sports fans preferring to only learn news when it’s made official rather than when it happens. We’ve seen that in the NFL before, with ESPN and NFL Network collaborating to prevent their reporters declaring picks before they’re officially announced (thanks to plenty of fans complaining about picks being “spoiled” on Twitter before they’re revealed on the broadcast) and with only a few outside reporters (like CBS’ Jason La Canfora) daring to violate that to actually report news as it happens (and taking Twitter criticism for doing so). And while it’s somewhat understandable that some fans would rather see Luck’s exit in a long-planned conference rather than a last-minute one called in relation to breaking news, it’s still somewhat remarkable to see that translate into criticizing Schefter for reporting notable news at a time earlier than what the team would prefer.

Of course, there’s also a perhaps more enlightened approach here that recognizes that Schefter is doing his job once that information gets to him, instead putting the criticism on whoever (from the Colts’ organization, from the league, or from Luck’s camp) leaked it to him. And that’s much more fair. It’s hard to say that Schefter shouldn’t report this once he has it, especially considering that someone else would likely get to it before the planned presser, but it’s not ridiculous to criticize whoever decided it behooved them to leak this to Schefter ahead of Luck’s planned retirement presser. It’s unclear how this benefits any of those potential sources (other than perhaps it providing them some future credibility or leverage with Schefter), and there’s certainly an argument that their decision to leak this caused unnecessary problems for both Luck and the Colts. So criticism of the source isn’t necessarily invalid.

But it’s perhaps even more interesting to hear from Schefter that the Colts were aware of Luck’s decision early in the week and that they contemplated holding his retirement press conference Friday, a day before Saturday’s game. That changes a few things with this story; for one, it illustrates that this was something Luck had already decided on, not a reaction to anything that happened Saturday (including his booing from fans). For another, it signifies that the Colts weren’t blindsided; they were already aware Luck was retiring, they just were planning to have the press conference about it on Sunday rather than Saturday. So that should perhaps diminish some of the criticism for Schefter’s decision to report this, and further illustrate that the reporting here was of something the team and the player were both already aware of.

It’s notable overall to again see a segment of NFL fans so committed to having news revealed only when it’s officially announced. That’s significantly different than other sports leagues, including the NBA, where a lot of the audience seems to love Adrian Wojnarowski breaking draft news before it’s officially announced (even if he has to use euphemisms like “focused on“). And it’s unclear why there’s this love for having players or teams announcing actual news in a manner of their choosing rather than having reporters break news as it happens. But it’s really notable to hear that the Colts were aware of Luck’s decision long before this game, and to hear that they could have avoided a lot of this debate if they’d just held the presser Friday. That suggests that a lot of the criticism that’s been lobbed at Schefter should really be aimed at the Colts’ organization for trying to keep this news under wraps for so long.