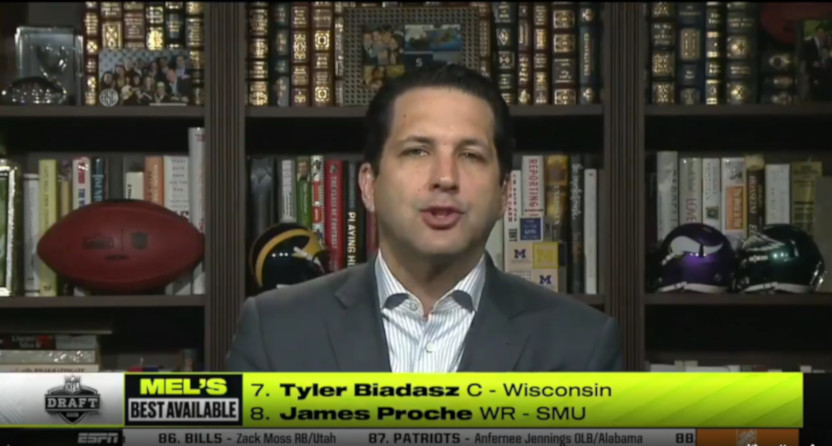 There’s been a lot of discussion about the Philadelphia Eagles using their second-round pick (53rd overall) on Oklahoma quarterback Jalen Hurts, a move that seemed curious considering they have 27-year-old Carson Wentz as their starter. Some possible justification arguments have been trotted out there, including that they can save money by having a backup QB on a rookie contract (true, but they could do that with a lower-round pick or an undrafted free agent, and using a second-round pick on a position with greater need might help more overall). But perhaps the biggest stretch yet came from Adam Schefter’s comments on ESPN that teams are telling him it makes sense to spend a high pick on a backup quarterback…because of the COVID-19 coronavirus pandemic? Here’s video of that via Dan McQuade:

Adam Schefter says multiple teams have told him they’re worried about their starting QB getting the rona, and that’s why the Eagles took Jalen Hurts despite having Carson Wentz pic.twitter.com/72pyiHXlMS

And a transcription via Brandon Lee Gowton of Bleeding Green Nation:

“Now in this day and age, I’ve had teams tell me it’s more important than ever to have a backup quarterback in this pandemic. We’re going to be playing next year, coronavirus is out there, COVID-19, what if your quarterback gets the virus? It’s an interesting situation here. I think there are more problems than ever before. And so I think teams are looking up to shore up the most important position in the sport. And that’s why the Eagles did it.”

That’s quite the argument. Yes, there are additional off-field ways for players to run into health concerns in the era of COVID-19, but quarterbacks often get injured on the field anyway, so it’s not like backup quarterbacks haven’t been important. (As the Eagles well know from Wentz getting hurt before and “Big Dick Nick” Foles leading them to a Super Bowl victory.) Maybe there are indeed teams who think it’s more important now than ever to have a good backup, but spending a high pick on a backup quarterback when you have depth issues elsewhere still seems like an odd move, and “But COVID-19!” doesn’t really justify it. (Especially as a player getting COVID-19 likely leads to some team isolation, and maybe an end to the season, regardless of that player’s position.) At any rate, this led to some funny commentary on Twitter, including from former Eagles’ defensive end Chris Long:

When Schefter said Eagles drafted Hurts as an insurance policy in case Wentz gets Coronavirus pic.twitter.com/OtsvBHfvXr

if Schefter's reasoning here is a window into the NFL's thinking on how it is going to deal with the coronavirus later this year — they think the season can continue if players have it, unlike the NBA — I don't feel too good about things https://t.co/mgJLPQrtBo

Schefter forgot that if any NFL QB gets Coronavirus they'll shut down the season.

Adam Schefter Had An All Time Spinzone About The Eagles Selecting Jalen Hurts Because They're Worried About Wentz Getting Coronavirushttps://t.co/9txtsL02pX

Of course, this is Schefter relaying what he’s been told by teams rather than making the argument himself from first principles (though his comments certainly suggest he’s giving the theory some support). But it’s still a remarkable line of logic to hear on ESPN’s draft telecast, and one that doesn’t seem to quite hold up.