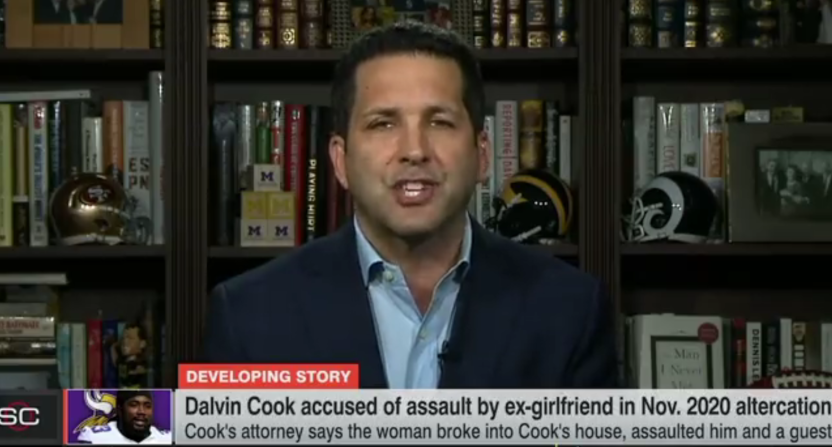 ESPN “NFL insider” Adam Schefter took a lot of criticism Tuesday night and Wednesday morning for his uncritical “reporting” of a narrative from Minnesota Vikings’ RB Dalvin Cook’s agent, a narrative that at the very least is currently up for debate. Schefter has already been criticized for his reporting practices recently, particularly around a “Mr. Editor” email to then-Washington team president Bruce Allen that contained an entire draft story for approval, and this has brought much more criticism on his head. Here’s how Schefter initially reported the Cook situation:

That accounting of events, is, at the very least, disputed. Rochelle Olson of The Minneapolis Star-Tribune did some actual reporting here and relayed the publicly-filed lawsuit in question from Gracelyn Trimble, which accuses Cook of assault, battery and false imprisonment. Olson also spoke to Trimble, who accused Cook of “giving me a concussion, leaving a scar on my face and taking me through hell.” Here’s the detailing of the events in question from Olson’s description of the lawsuit:

Trimble flew to Minnesota on Nov. 19 to break up with Cook and get her things from his Inver Grove Heights home. She entered through the garage, grabbing mace she stored there on her way in, the lawsuit said.

Trimble claims in the filing that Cook got angry when she asked for his help in gathering her things. Cook “grabbed her arm, and slung her whole body over the couch, slamming her face into the coffee table and causing her lower forehead and the bridge of her nose to bust open.”

She attempted to spray the mace at Cook, but he overpowered her and the mace went into her eyes, the lawsuit said. She went to shower when she was allegedly assaulted again.

Then Trimble went into the bedroom, grabbed Cook’s gun and called her friend, according to the lawsuit. Cook overheard her and threatened her, and beat her with a broomstick, the suit claims.

The next morning, when Cook took her to the airport, Trimble covered her injuries with a hooded sweatshirt, sunglasses and a face mask. On Nov. 25 in Florida when she sought treatment for her injuries, she told medical personnel she had been in an ATV accident. She learned she had a concussion along with several deep cuts and bruising, the lawsuit said.

That lawsuit also includes these Twitter DMs purportedly between Trimble and Cook, including a photo that Trimble says represents her injuries (click the full tweet to see that):

Meanwhile, here’s Cook’s lawyer’s accounting of the evening in question, which Schefter had no problem sharing:

So, at the very least, there’s an entire side of this story that Schefter did not present at first, and that he didn’t even acknowledge until almost two hours after his original report (and which he then acknowledged with “an update” rather than a correction, and with a link to an unbylined ESPN.com story rather than the Star-Tribune reporting):

On Wednesday, with Schefter understandably under fire over this, he offered some “apologies.” Here’s the first one, on NFL Live:

That includes Schefter saying “I should also add that in a case like this, in a story that’s so significant and sensitive, you need to reach out to both sides and get more information and more comment. In this particular case, that should have been done last night. And in the future, it’s a reminder that sometimes you have to slow down in this world. And I appreciate you giving me the opportunity to clear that up.”

That’s probably not even an apology, as it doesn’t include “I’m sorry,” or “I was wrong,” or even any “I” at all beyond “I should also add” and “I appreciate you.” But Schefter did manage to do slightly better in his next kick at the can on the 6 p.m. ET SportsCenter. And, not surprisingly, that’s the clip he chose to tweet, rather than his earlier “apology” attempt:

Latest on the dual accusations involving Dalvin Cook and his ex-girlfriend: pic.twitter.com/YeBaEGynSD

The key apology part there comes at 1:20. “I just want to add here that in a case like this, it’s important to reach out to all sides for information and comment. When I got the information the other night, I didn’t do that. And I could have done a better job reaching out to the other people, especially on a story as sensitive and as significant as this. I didn’t do that properly, and it’s a reminder to slow down in this world. And I appreciate you, Elle [Duncan, the host here], giving me the opportunity to say that.”

That’s a better apology, and if Schefter had issued that in the first go-round, he’d be under much less fire here. That’s actually owning up to the issues with his “reporting” here, which appears to have comprised just restating verbatim what Cook’s agent told him. But this apology came almost 24 hours after his initial report, and it came several hours after his first “apology,” which didn’t offer any admission of wrongdoing. And it’s a further reminder to consider Schefter and what he’s “reporting” with several grains of salt.