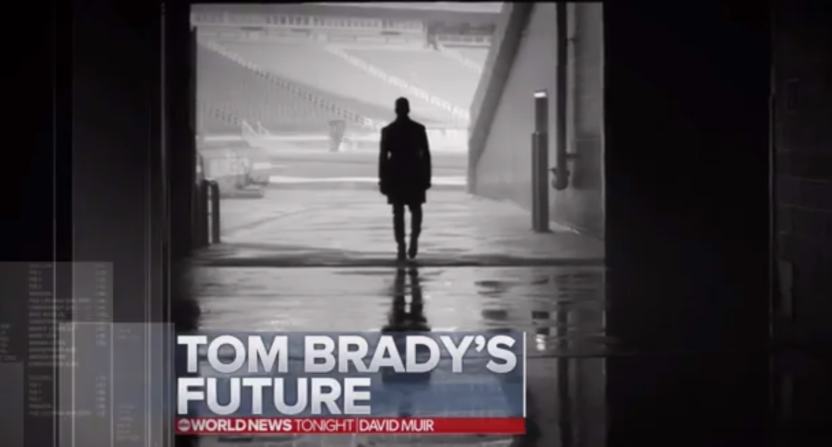 It’s no secret that Tom Brady’s contract is up, and he talked about being open to playing for a team other than the New England Patriots as early as January 6 (the day after the Patriots’ wild card round playoff loss to the Tennessee Titans). And when Brady posted a black-and-white photo of him in the Gillette Stadium tunnel to Twitter on Jan. 30, that fueled plenty of media speculation about if it was a sign of if he was leaving or not, even though ESPN’s Adam Schefter tweeted later that day “Am told that this tweet is not related to Tom Brady’s football future.” Indeed, it was not; it was a teaser for his Hulu ad on the Super Bowl LIV broadcast, which we named one of this year’s best 10 Super Bowl commercials. Here’s that ad:

Amazingly, though, almost four weeks after that commercial aired and made it explicitly clear what Brady was referencing with his photo, ABC World News anchor David Muir referred to that photo as “cryptic” and wondered if it was “a sign” in a short segment on ESPN’s latest reporting that Brady is “open to a new home” in free agency (which is really something that’s been discussed for months, going back to those comments published in Peter King’s Jan. 6 Football Morning In America column). Here’s that clip:

“And the speculation over Tom Brady’s future continues tonight. Citing sources, ESPN is now reporting that the New England Patriots’ quarterback intends to enter free agency and play for another team next year. Brady cannot start negotiating with other teams until March 16. ESPN is saying that he has not met with the Patriots. The six-time Super Bowl winner had posted this cryptic image last month. Is this all part of the negotiating process with the Patriots? We will see.”

World News Tonight also used that photo as the graphic for their tease of the Brady story at the top of the broadcast:

“And could Tom Brady be leaving the New England Patriots? The new headline, tonight.”

It was silly enough in the first place when people uncritically wrote stories about that photo, especially considering that it was posted just ahead of the Super Bowl and that so many things posted in that time period have turned out to be references to ads. But it’s even more ridiculous to have that discussed on ABC World News as a “cryptic image,” with questions about if it was “part of the negotiating process,” weeks after it was explicitly used in an ad on the most-watched television broadcast of the year by far. This was not a little-known fact! But perhaps no one involved in this segment caught that ad.

At any rate, it’s incredible to see ABC World News uncritically wondering if a Brady ad-related photo is “part of the negotiating process” weeks after the commercial aired. But it fits with former Patriots’ executive Scott Pioli’s comments to Julie Stewart-Binks earlier this month on how desperate people are to read into everything Brady posts:

“What’s going to happen with Tom? I don’t know. It’s so funny, every day I open up the internet and there’s this new story, and I’m watching how many people are getting traction out of Tommy’s life and his story. Like when that silly picture came out.” [Stewart-Binks interjects with “It was great for Hulu.”] It was great, but it’s just so funny how every last thing is put under the microscope, and how much people want to speculate. Honestly, when I was on the other side, meaning not doing media stuff, on the football side, this was the kind of stuff that drove me crazy when you’re with a club. Because, not only as an executive or a coach or an assistant coach or as a player…no matter what Tommy does, people are looking at it as ‘It’s a sign of something.’ Not everything in life is a sign of what you might be doing.”

Indeed. And this photo definitely wasn’t a sign of what Brady might be doing, and that was revealed to the world on the Super Bowl broadcast on Feb. 2. So for ABC World News to call it “cryptic” and wonder if it’s “part of the negotiating process” 25 days later is amazing.