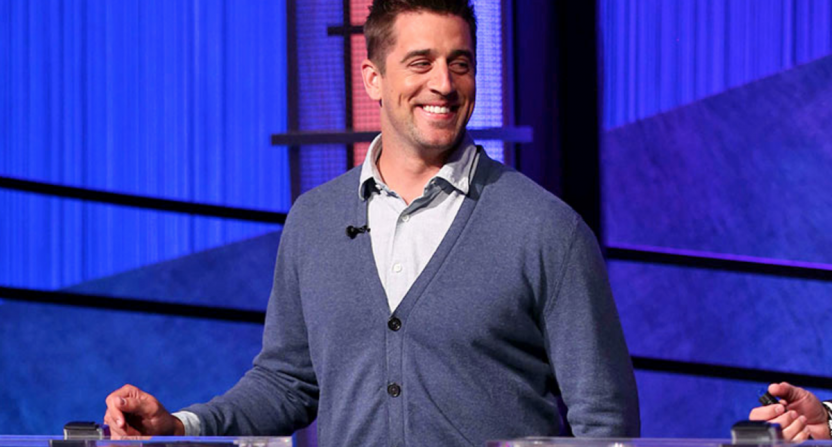 In the wake of Alex Trebek’s death, a roster of celebrity guest hosts was announced prior to Jeopardy! naming a permanent successor.

Aaron Rodgers was on that list, about which we wrote at the time:

The Green Bay Packers quarterback revealed the news during an appearance on The Pat McAfee Show Tuesday afternoon.

“One of my idols growing up was Alex Trebek,” said Rodgers. “Being able to be on Jeopardy! years ago, even though my wardrobe outfit wasn’t the greatest choice, they’re doing some guest-hosting spots and this is going to be released here pretty soon, but I had the opportunity to do one of those.”

But Rodgers may have broken that news before the show’s producers wanted him to. ESPN’s Rob Demovsky was told no announcement on other guest hosts besides famed Jeopardy! champion Ken Jennings had yet been made.

“I may have jumped the gun a little bit, so I apologize to Jeopardy! if they wanted to announce it,” said Rodgers during a press conference. “I just got so excited on the show earlier. It just went down the last couple of days, us figuring it out. It is very exciting. It’s for the offseason. We’ll be even more excited when that opportunity gets a little closer, but, man, the show has been so special to me over the years.”

Now we know when Rodgers will be making his appearance: his taped run will start on Monday, April 5th.

That news was from USA Today’s Gary Levin, who reported the full celebrity-host schedule yesterday:

Rodgers following Dr. Oz is admittedly pretty funny, but he should be thankful; his run begins the night of the NCAA men’s championship game, meaning he avoided the weeks when CBS affiliates spend Thursday and Friday evenings airing March Madness games instead. (If Jeopardy! is looking to bring in some sports fans who might not otherwise watch, not putting Rodgers up against that competition also makes sense.)

This is just the latest news for the Packers QB; on top of winning the MVP award, his engagement to actor Shailene Woodley was officially confirmed this week, with Woodley noting that she never thought she’d be engaged to “someone who throws balls for a living.”

And, speaking as a Bears fan: if Rodgers wants to fall in love with hosting Jeopardy! and retire early, that would be completely fine.