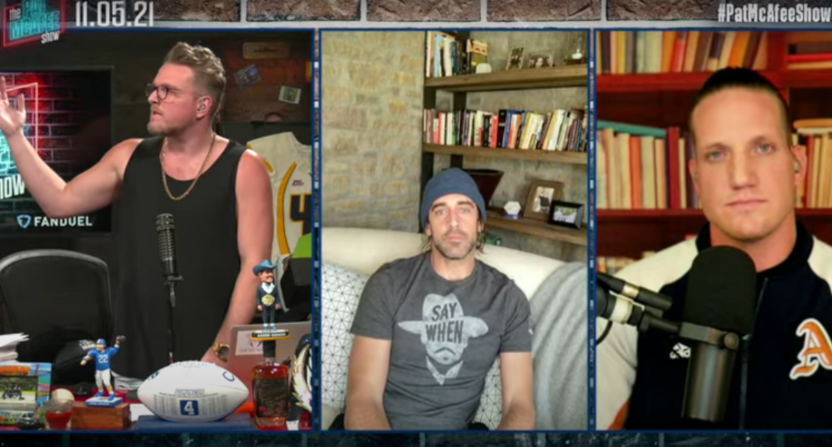 Here’s more from Rodgers, picking up after his comments that “this idea that it’s a pandemic of the unvaxxed is just a total lie.”

“And I go back to these two questions for the woke mob. Number one, if the vaccine is so great, then how come people are still getting COVID, and spreading COVID, and unfortunately dying from COVID? If the vaccine is so safe, then how come the manufacturers of the vaccine have full immunity? So let’s just step back and realize this vaccine is revolutionary, the things that they’re doing, however, we don’t know a whole lot about it. And to just say that it’s a blanket for all that ails you, in my opinion, is wrong, and reckless.”

“And for the media out there taking shots at me, you don’t know my story, and now you do. So quit lying about me. Personal health decisions, in my opinion, should be private, and they shouldn’t have to be gone through the ringer and overscrutinized by people who are just pushing their own types of propaganda onto people and ideals.”

“You want to have a conversation about it, I’m more than willing to have a conversation about it. But bodily autonomy is a right. And the shaming and the outing that people seem to get off on so much, of finding these people, ‘Oh my god, can you believe these crackpots who are not vaccinated?’ Everybody has their own story. Everybody has their own story, and their own issues, and their own reasons for doing things. But this shaming, cancel society, that is wrong.”

“I made a choice that was in my best interests. You might respect it, you might hate it. But I bet you the same people that hate it are the same people that are really going to hate the fact that I’m 48 hours in, and I consulted with a now-good friend of mine Joe Rogan, after he got COVID, and I’ve been doing a lot of the stuff that he recommended in his podcasts and on the phone to me. I’m going to have the best immunity possible now, based on the 2.5 million person study from Israel that people who get COVID and recover have the most robust immunity.”

(Note: This was not a 2.5 million person study. The main study with conclusions along those lines was one of 92,070 people in Israel, published online in September, but not yet peer-reviewed. It was specifically about the Delta variant of COVID-19, not all COVID-19 infections. It did conclude that those who had been doubly vaccinated, but not infected, contracted Delta at a higher rate than people who were unvaccinated, but had previously been infected. But it only actually looked at 748 cases of infection under those circumstances. And it also found that the best protection of all was for those who had previously been infected who then received one subsequent vaccine shot.)

(Note: The CDC has issued warnings around the usage of both ivermectin and hydroxychloroquine to treat COVID-19. On ivermectin, a CDC health advisory from August:

“During the COVID-19 pandemic, ivermectin dispensing by retail pharmacies has increased, as has use of veterinary formulations available over the counter but not intended for human use. FDA has cautioned about the potential risks of use for prevention or treatment of COVID-19. Ivermectin is not authorized or approved by FDA for prevention or treatment of COVID-19. The National Institutes of Health’s (NIH) COVID-19 Treatment Guidelines Panel has also determined that there are currently insufficient data to recommend ivermectin for treatment of COVID-19. ClinicalTrials.gov has listings of ongoing clinical trials that might provide more information about these hypothesized uses in the future. Adverse effects associated with ivermectin misuse and overdose are increasing, as shown by a rise in calls to poison control centers reporting overdoses and more people experiencing adverse effects.”

On hydroxychloroquine, a CDC morbidity and mortality weekly report from September 2020:

Hydroxychloroquine and chloroquine are approved to treat autoimmune diseases and to prevent and treat malaria. Earlier this year, they were widely reported to be of potential benefit in the prevention and treatment of COVID-19; however, current data indicate that the potential benefits of these drugs do not outweigh their risks.

Hydroxychloroquine is not mentioned in current National Institutes of Health treatment guidelines for COVID-19 patients.)

That’s the entirety of Rodgers’ opening statement to McAfee and Hawk, and we’re not going to transcribe everything he says in follow-up back and forths. But there are a few further comments he makes that are worth further transcription. At the 1 hour 31 minute mark, Rodgers says he didn’t disclose his unvaccinated status to the media or the public in August because of how journalists were asking.

“I wasn’t hiding from anyone, I was trying to minimize this conversation, and having it go on and on. And there were people in the media who somehow found out about it and had been sitting on it for a couple of months. So it wasn’t like this thing was hidden until this week. People knew it, and they sat on it. And at some point, I knew I was going to have to discuss it. And I was ready to discuss it.”

“But the problem with this is it’s so political, and health shouldn’t be political. It shouldn’t be ‘Trump endorsed ivermectin and HCQ, so take that shit off, it doesn’t work.’ In general, we all should have been a little hesitant. When Trump in 2020 was championing these vaccines that were coming so quick, what did the left say? I’m talking about every member of the left; ‘Don’t trust the vaccine, don’t get the vaccine, you’re going to die from the vaccine.'”

(Note: That’s absolutely not true, as there isn’t even a cohesive “the left” on anything, and especially not on not taking vaccines. And it would be nice to see Rodgers cite some sources there. Perhaps some people said that; it certainly wasn’t any sort of massive group of people, regardless of political affiliation.)

“And what happens? Biden wins, and everything flips. Shouldn’t that initially give you a little bit of pause and have you go ‘Hold on a second, isn’t this shit about health, and not about, like, politics?’ And to that point, has any member of the health staff actually gotten up and talked about real health? Have they talked about exercise, a healthy diet, eating real food, drinking water, taking vitamins, vitamin D deficiency and what that causes in the body? No! There hasn’t been any of that!”

(Note: There are absolutely CDC and NIH recommendations on all of those things. But they’re generally not endorsed as COVID-19 preventions or cures.)

At 1:33:30, Hawk asks a good question about if the league or the team had pushed back on Rodgers’ COVID protocol violations with his unmasked press conferences. Rodgers responds:

“There have been conversations with it. I would, you know, add this to the mix as an aside. The great MLK (Dr. Martin Luther King, Jr.) said you have a moral obligation to object to unjust rules and rules that make no sense. In my opinion, it makes no sense for me. I test every single day, every single day. So, you know, we play in Arizona on Thursday, and we come back, guys leave for the weekend, I don’t.”

“We test every single day. Early in the morning. If I test in the morning, and I wear a mask in the entire facility, and you want me to wear a mask (in the press conference) just to shame me that I’m not vaccinated, to continue to perpetuate a story that I’m not vaccinated, in a room where the only way you can get in that room is that you’re fully vaccinated against a virus that I don’t have as a non-vaccinated person. Not to mention, you’re sitting more than six feet away from me, in most cases at least 20 feet away from me. Where’s the science in that? Where’s the science in that that says ‘That makes perfect sense?’ It was my opinion that that wasn’t rooted in any science. Every other protocol, I followed to the T.”

(Note: The discussions of six feet are not about that as the outer range of distance at which the COVID-19 virus can spread. Here’s what the World Health Organization says on how the virus spreads:

The virus can spread from an infected person’s mouth or nose in small liquid particles when they cough, sneeze, speak, sing or breathe. These particles range from larger respiratory droplets to smaller aerosols.

Current evidence suggests that the virus spreads mainly between people who are in close contact with each other, typically within 1 metre (short-range). A person can be infected when aerosols or droplets containing the virus are inhaled or come directly into contact with the eyes, nose, or mouth.

The virus can also spread in poorly ventilated and/or crowded indoor settings, where people tend to spend longer periods of time. This is because aerosols remain suspended in the air or travel farther than 1 metre (long-range).

People may also become infected by touching surfaces that have been contaminated by the virus when touching their eyes, nose or mouth without cleaning their hands.)

That concludes our transcription of Rodgers’ comments to McAfee and Hawk. For more on him, see our other posts, including “Pat McAfee provided Aaron Rodgers with the perfect, or worst, platform, depending on how you see it,” “Packers coach Matt LaFleur comments on Aaron Rodgers interview,” “Aaron Rodgers’ interview has people thinking about his ‘Jeopardy!’ stint,” and “NFL world reacts to Aaron Rodgers’ wild interview.”

Information on COVID-19 vaccines is available at the CDC website.