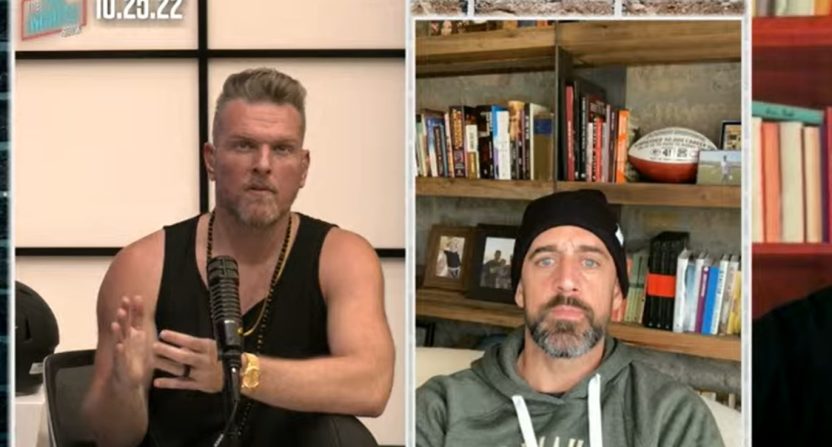 Did Pat McAfee ask Aaron Rodgers a real question? Uh-oh, that might not bode well for the future of their relationship.

Rodgers joined The Pat McAfee Show for his weekly segment Tuesday afternoon, the quarterback’s soft-landing spot in the media. But McAfee briefly broke character during their latest chat, when the former NFL punter and highly successful podcast host asked what Rodgers deemed to be a “real media question.”

Nope, it was about the upcoming trade deadline and Rodgers’ interest in having conversations with Green Bay Packers GM  Brian Gutekunst regarding possible transactions. After Rodgers admitted he was “in all the conversations,” McAfee pressed a bit harder, attempting to gauge whether the quarterback was satisfied with his level of input.

“Do you want to be? Do you not want to be?” McAfee asked. “Do you feel like you’re included as much as you wanted to be whenever that whole conversation started a couple years ago and do you feel like it’s a respect-worthy level of input that you’re allowed to have on the team that is ultimately being judged by who you do forever?”

“That’s a sticky question,” Rodgers said with pause. “You’re trying to trap me a little bit. So I’m not gonna bite on that, but that was good, that was a real media question from you.”

“Trap” is a rather sensitive assessment of the question, but McAfee did at least briefly attempt to pry into whether Rodgers is satisfied with the Packers’ front office as the team currently sits well below its usual expectations. Even with the Packers struggling this season, Rodgers can usually count on McAfee allowing the quarterback to maintain his ‘I’m smarter than you’ schtick.

Rodgers has already drawn a distinct line in the sand in terms of the NFL media members he trusts and those who he doesn’t. Don’t expect McAfee to fall on the wrong side of that line, but also don’t expect him to press much harder than he did Tuesday afternoon. McAfee is not a journalist, and he rarely tries to be. He’s an entertainer and a really good one.