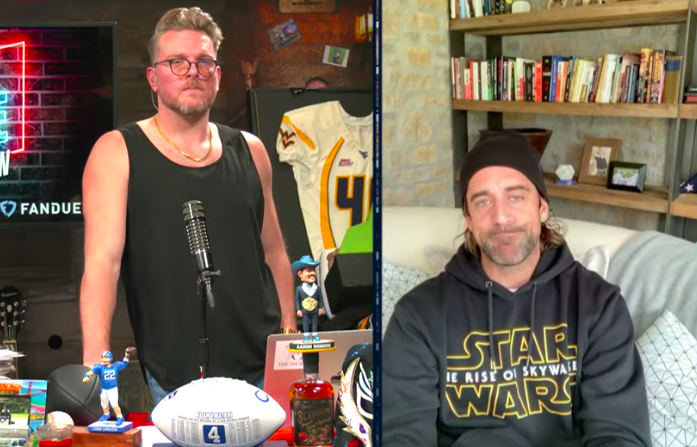 Aaron Rodgers returned to The Pat McAfee Show on Tuesday to comment publicly for the first time since the Friday appearance that turned him and his vaccine stance into the biggest conversation in the country.

Rodgers made waves on Friday with a blistering diatribe about the reasons he did not receive a COVID-19 vaccine. During the mostly uninterrupted rant, he namechecked the “woke mob” and “cancel culture,” quoted Martin Luther King, Jr., unironically said “my body, my choice,” and mentioned that he was taking medical advice from Joe Rogan. He received strong criticism from NFL circles and beyond, was lampooned on Saturday Night Live, lost a sponsorship, and saw his role in the State Farm commercials be heavily diminished.

On Tuesday, McAfee welcomed Rodgers back to his usual timeslot, and the Green Bay Packers quarterback had clearly spent some time with a crisis PR team or did some reflecting on the criticism he received. Gone was the combative nature of his Friday appearance, replaced this time by a contrite and quieter Rodgers.

"I acknowledge that I made some comments that people might have felt were misleading.. to anybody who felt misled by those comments I take full responsibility" ~@AaronRodgers12#PatMcAfeeShowLIVE pic.twitter.com/i9F7ojd8w8

“I made some comments that people may have thought were misleading,” said Rodgers towards the beginning of his appearance. “I take full responsibility for those comments.”

“I shared an opinion that is polarizing,” said Rodgers. “I get it. And I misled some people about my status, which I take full responsibility for those comments.”

Rodgers didn’t exactly back away from his sentiments on Friday, saying that he still believes in the things he said. But he clearly was looking to back away from being the face of any kind of social, political, or medical movement.

“I’m an athlete, I’m not an activist,” said Rodgers. “So I’m gonna get back to doing what I do best and that’s playing ball…further comments I’m gonna keep between me and my doctors.”

"I'm an athlete not an activist.. I shared my opinion & it was what I felt was in my best interest for my body" ~@AaronRodgers12#PatMcAfeeShowLIVE pic.twitter.com/j9jeDBitTr

One of the moments that really stood out on Friday was when Rodgers mentioned that he had consulted with podcaster Joe Rogan for medical advice related to COVID-19. McAfee even said on Monday that this was the moment he knew that the interview was going to go “bananas.” McAfee pressed Rodgers to comment on his relationship with Rogan and, while the quarterback was clearly uncomfortable doing so, he didn’t shy away from the fact that he considered Rogan’s advice, along with the advice of others.

“I have a lot of admiration for Joe [Rogan],” said Rodgers. “I definitely talked with about a dozen friends of mine who dealt with COVID and they all were very helpful in different ways. Joe being one of them.”

As far as rumors that he was out in Los Angeles or that he was “very upset” about the reaction to Friday’s interview, Rodgers said that some of the criticism he received did sting but he’s also spent the days since trying to reflect and grow.

“I don’t really feel like there’s a need to address [rumors],” said Rodgers. “It’s been a reflective time for me. I’ve had some great conversations with people…I respect everybody’s opinion…I’m a life-long student. I love learning.”

McAfee, who dedicated a lot of time on Monday to say he shouldn’t have been expected to push back against Rodgers regarding vaccines and medical data, clearly still decided to shift strategies on Tuesday and go on offense a bit more. He pressed Rodgers to discuss the Rogan connection, whether or not the criticism he received was hurtful, what kind of regrets he might have, and what happens next. It certainly wasn’t like Rodgers getting grilled on 60 Minutes but, for McAfee, it was a solid reaction to the journalistic critiques he claimed not to heed but clearly did.

As for Rodgers, he obviously seems to have noted the gravity of the situation and the impact of his comments regarding vaccines during a pandemic in which millions of people have died around the world. He doesn’t appear as though he’s going to change his opinions about anything but the glib attitude he initially presented seems to have been tamped down significantly in response to the way it was received. That said, his “apology” was still the usual “if you were offended…” non-apology that we’re used to hearing in these situations.

Rodgers implied that he’s done talking about these topics, at least until he had to appear before NFL reporters before or after Sunday’s game against the Seattle Seahawks. He can expect to get some serious questions lobbed in his direction at that time, but until then, it sounds like we won’t be hearing from Aaron Rodgers anymore on the issues of vaccines.