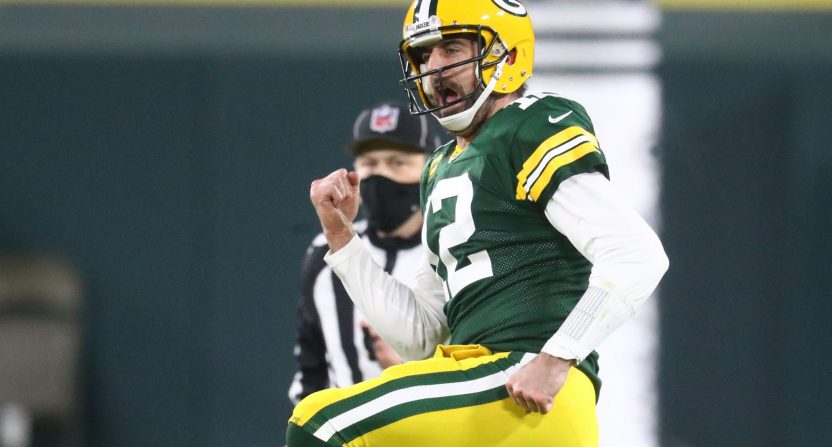 While Aaron Rodgers has certainly made a lot of headlines for things he’s said and done off the field this year, it’s hard to deny that the reigning NFL MVP hasn’t put up MVP numbers once more for the Green Bay Packers.

While Rodgers has been working hard to push back against the “woke mob” during the week, he’s been working even harder to lead the Packers to a league-best 13-3 record and the No. 1 seed in the NFC playoffs, regardless of what happens this weekend.

With a 68.6% completion percentage, 3,977 passing yards, 38 total touchdowns, and just four interceptions, Rodgers is considered by many to be a lock to pick up his second-straight MVP award.

Aaron Rodgers has four interceptions on 513 passes this season.

If he doesn't throw another pick this season, it would be the third time in his career he's thrown 500+ passes and four or fewer INTs. No other QB has done it even once in NFL history, per @ESPNStatsInfo

Don’t tell that to Hub Arkush. The NFL insider, executive editor of Pro Football Weekly, and Westwood One sideline reporter is one of the 50 media members that the Associated Press gives a vote for the NFL MVP award. During an appearance Tuesday on 670 The Score in Chicago, Arkush said that he will not vote for Rodgers because, amongst other things, he considers the Packers QB to be a “jerk” and a “bad guy.”

Hub Arkush has an MVP vote and won't be voting for Aaron Rodgers.

Here's the exchange and his rationale. https://t.co/BvdIpNVelx

“I don’t think you can be the biggest jerk in the league and punish your team, and your organization and your fan base the way he did and be the Most Valuable Player,” Arkush said. “Has he been the most valuable on the field? Yeah, you could make that argument, but I don’t think he is clearly that much more valuable than Jonathan Taylor or Cooper Kupp or maybe even Tom Brady. So from where I sit, the rest of it is why he’s not gonna be my choice. Do I think he’s gonna win it? Probably. A lot of voters don’t approach it the way I do, but others do, who I’ve spoken to. But one of the ways we get to keep being voters is we’re not allowed to say who we are voting for until after the award has been announced. I’m probably pushing the envelope by saying who I’m not voting for. But we’re not really supposed to reveal our votes.”

While it might be assumed that MVP voting needs to be about what happens on the field, Arkush says that he is not aware of any specific guidelines that disallow him from including off-field behavior in his vote.

“There’s no guidelines,” Arkush said. “We are told to pick the guy who we think is most valuable to his team. And I don’t think it says anywhere, ‘strictly on the field,’ although I do think he hurt his team on the field by the way he acted off the field. They’re gonna get the No. 1 seed anyway, but what if the difference had come down to the Chiefs game, where he lied about being vaccinated, and they ended up getting beat?”

The Chicago-based reporter is aware that some will “just think I’m a Packer hater,” but he added, “I can guarantee you I will not be the only one not voting for him.”

“I just think that the way he’s carried himself is inappropriate,” said Arkush. “I think he’s a bad guy, and I don’t think a bad guy can be the most valuable guy at the same time.”

Look, there are plenty of reasons to dislike the way Aaron Rodgers has handled himself this year. From the way that things broke down between him and the Packers during the offseason to misleading people about his vaccination status to spreading unsound medical advice during a pandemic to whining about cancel culture because some people disagreed with him, Rodgers has become a polarizing figure in America.

But that’s got nothing to do with the NFL MVP award. At the end of the day, you can’t possibly say that anything Rodgers has said or done has negatively impacted the play of the Packers this season. If anything, it’s a testament to how good of a football player he is that, with all of that going on, he’s still putting up MVP numbers and leading a Super Bowl contender into the playoffs.

Concerns about off-field issues are a common factor when it comes to things like the Hall of Fame, but this just feels silly. And it appears that a lot of other NFL journalists agree.

I have come to dislike Aaron Rodgers this season because he spews misinformation about the COVID-19 pandemic and the vaccines. I also think he is a great quarterback. And I also think Hub Arkush should be stripped of his MVP vote for this. https://t.co/pheUvQEgnn

Hub Arkush has made a mockery of sports media by letting his feelings impact his valuable MVP vote because he thinks Aaron Rodgers is a “bad guy.” Pathetic and more than worthy of losing his vote. Smh!

Private biases or judgments regarding individual players should not influence awards voting. Is Aaron Rodgers a liar (as to his vaccination status) and at times a jerk? Yes. Is he the MVP this year? Yes.

Great example of why the media should never vote for awards and why I don’t. I don’t really care how he votes or whether he’s right. We aren’t supposed to be the story. This is so easily avoidable. https://t.co/QoiLYPRUAG

We’ll see if the Associated Press decides to make changes to the award voting process, or makes a decision about Arkush’s vote, especially if the NFL decides to make a stink about hearing the MVP award might not be voted on based on performance on the field.