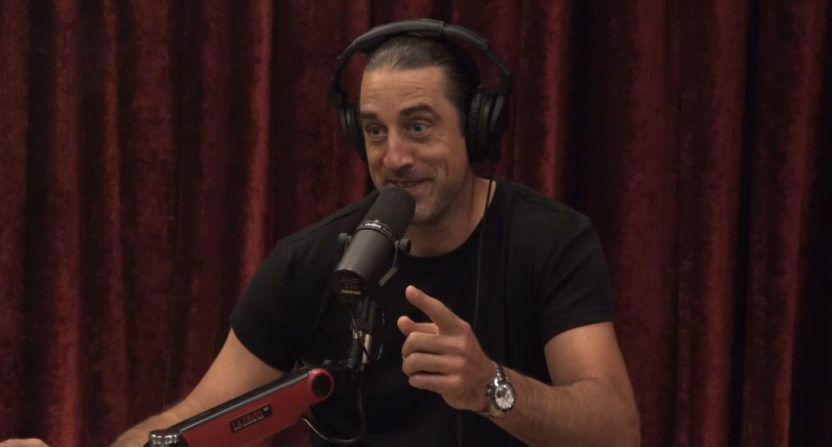 During a recent interview with Joe Rogan, Aaron Rodgers declared “a line in the sand” was drawn in the way he’s been covered by the media. Predictably, Rodgers doesn’t believe Keith Olbermann is on his side of the line.

Ever since Rodgers revealed he was unvaccinated against COVID-19 last fall and cited advice from Rogan as he spun his decision on The Pat McAfee Show, an eventual appearance on The Joe Rogan Experience was assumed. The long-awaited interview occurred in a surprise Saturday edition of Rogan’s show this past weekend, right in the middle of Rodgers’ offseason media tour that included The Aubrey Marcus Podcast and Barstool’s Pardon My Take. While Rogan, Marcus and PMT are on his side of the sand, don’t expect Rodgers to join Olbermann’s podcast for another tell-all.

“I lost the majority of allies I thought I had in the media,” Rodgers told Rogan of the response to his vaccine refusal. “The good thing is, it drew a real line in the sand and everybody who wanted to jump on me and trash me did, and showed their true colors. And very few people, in the media at least, stuck by me.”

“People just said, ‘just get the jab.’ The Keith Olbermanns of the world. ‘Just get the damn jab!’” Rodgers repeated, this time in a voice meant to mock Olbermann’s style of commentary.

Olbermann didn’t need the polarization of COVID to show his true colors, as the once almost universally lauded SportsCenter anchor has since used political commentary to draw his own line in the sand. Olbermann has formed plenty of enemies over his political stances and Twitter fights about both news and sports, while still managing to maintain enough loyal fans to keep receiving new media opportunities.

“That guy is the gift that keeps giving,” Rogan added of Olbermann. “He is f*cking hilarious. Unintentionally hilarious like he’s a character in a movie. I love it, I hope he keeps talking.”

Rodgers is not the only NFL quarterback to skip getting vaccinated. Lamar Jackson was cagey about his vaccination status last year, while Carson Wentz and Kirk Cousins both stated they were not vaccinated against COVID-19. The immediate response to their decision was largely negative, but Olbermann and others were quick to move on.

The difference with Rodgers, however, was that he duped NFL fans and reporters into believing he was vaccinated by claiming he was “immunized.” Months later, when it was revealed that he wasn’t vaccinated, Rodgers repeatedly defended himself with anti-vax tirades, citing “cancel culture” the “woke mob” and blaming the media for turning people against him. Unlike Jackson, Wentz and Cousins, Rodgers is the one who kept talking about the pandemic and vaccines, preventing the media from moving on.

And nearly a year after telling the media he was “immunized” against COVID, Rodgers is still talking about it. Keith Olbermann didn’t force the Green Bay Packers quarterback to sit down with Joe Rogan for three hours. Rodgers brought that on himself.