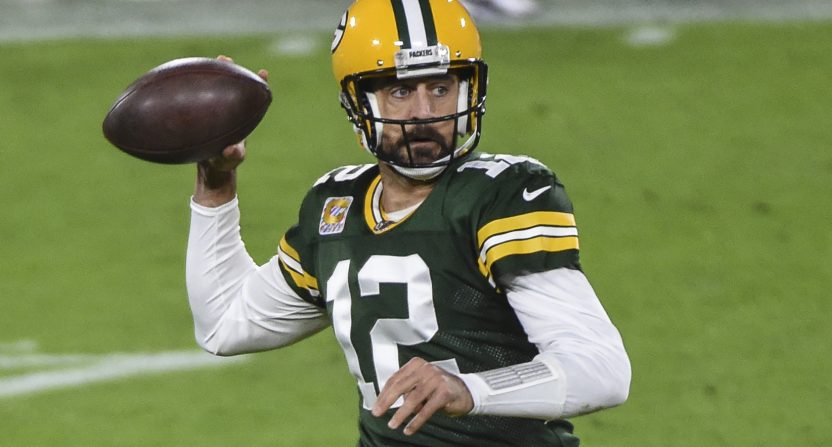 CBS, ESPN, Fox, NBC, and NFL Network have all surely had Green Bay Packers quarterback Aaron Rodgers on their radar for football commentating when his NFL playing career ends (just like how we constantly hear about Drew Brees and Peyton Manning for broadcasting gigs). Rodgers is a highly intelligent football mind (as shown by his incredible efficiency as a quarterback) with a good sense of humor, which would make for a nice combo as a football commentator.

But it seems that Rodgers has zero interest in being the next post-retirement Tony Romo.

On Tuesday’s edition of The Pat McAfee Show, McAfee asked Rodgers, “Are you going to get into commentating or into TV whenever you’re done?

“Well, I’ve given a lot to this game. I’ve been playing since I was in eighth grade. I’ve been playing 16 years. And I just feel like, when I’m done, I want to be done. I think it would be fun to help out an age group that I feel is real impressionable still, like high school kids. I think being able to volunteer, help, or just help with some quarterback stuff would be fun. Just because I love the game so much, I don’t want to totally get out of it. But as far as the pro level? Yeah, I don’t see myself doing anything with it. I’ve given physically so much to the game, and mentally all the years. I feel like I’ll be pretty satisfied with what I did and what I contributed, and move on at that point.”

Rodgers said in May that he has a “strong desire to play into his 40s,” and you can understand why with the MVP-caliber season he’s putting together right now as his 37th birthday approaches (Dec. 2).

So, it’s likely that Rodgers’ post-retirement life is still several years away. Perhaps he changes his mind by then about working as a football analyst, especially if a network were to offer him a crazy amount of money. But for now, we should assume that Rodgers won’t be an option for the TV networks.