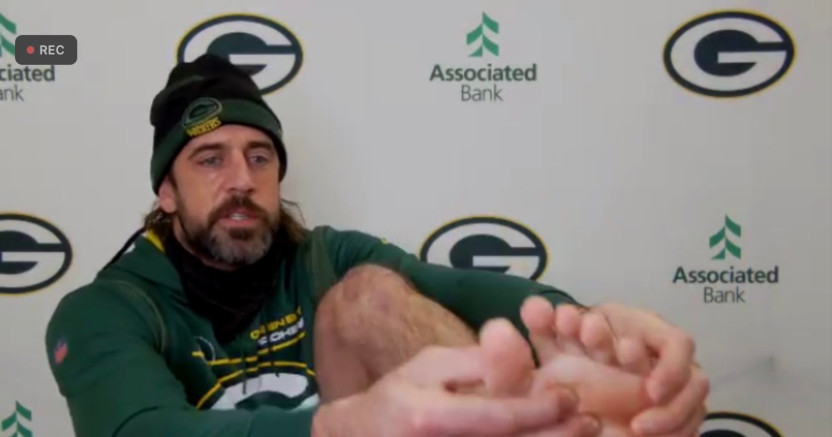 As per Green Bay Packers’ quarterback Aaron Rodgers’ comments to media Wednesday, which involved him showing off his injured toe on a Zoom press conference, that injury is a fractured toe. Those comments came after Rodgers told Pat McAfee Tuesday that he had “no lingering effects, other than the COVID toe”; Andrew Beaton of The Wall Street Journal then talked to Harvard associate professor Dr. Esther Freeman about the actual medical condition of “COVID toe” (a casual reference for pernio or chilblains, older medical issues that have seen recent uptick as a complication of COVID-19). That piece than led to Rodgers showing his toe to media, confirming he didn’t have chilblains, somehow citing Molly Knight as the person who wrote the COVID toe piece (as far as we can tell, Knight, who mostly covers baseball, hasn’t written about this at all, but did (like many) tweet about the Journal piece before later deleting that tweet), and going on a rant about “disinformation”:

Rodgers said it's not COVID toe. He was just joking around with @PatMcAfeeShow yesterday and ripped the Wall Street Journal story about him supposedly having COVID toe. He lifted up his foot so we could see he had no signs of COVID toe. He won't miss any time because of this.

Aaron Rodgers was clearly waiting for the COVID-toe question because you can hear him say, “I don’t know if I have room to get my toe up there,” at the start of his press conference.

Here’s his full answer about his fractured toe — with said toe on the screen. pic.twitter.com/hoC2UZTxME

Demovsky asked the key question in the clip: “I had no idea if you guys were joking around or not. Do you have COVID toe?”, and Rodgers responded “”I’m glad you asked just so I could show you the lesions on my foot here, Rob, so if I have enough room on this camera, let me see if I can. Oh, oh there’s no lesions whatsoever. Oh, what a surprise. No, that’s actually called disinformation when you perpetuate false information about an individual. I have a fractured toe.”

“I expect a full apology from Molly Knight and whoever her editor was. I did  get a kick out of reading that article. That was very, very interesting. But no I had never heard of COVID toe before. Pat made a joke about it on the show, and I mentioned yesterday that it’s worse than a turf toe and it must be a bone issue. I can’t believe I again have to come on the air and talk about my medical information. But yeah. I have a fractured toe, I’ve never heard of COVID toe before, I have no lesions on my feet. That’s just a classic case of disinformation. It’s surprising, coming from what used to be a reputable journalistic institution. But that’s the world we live in these days.”

As noted there, Rodgers going after Knight for being one of many people who retweeted the WSJ story feels silly. But as for that story itself, it’s certainly possible to criticize Beaton and the WSJ for an overreach. As Mike Florio noted at Pro Football Talk Tuesday in a piece titled “Does Aaron Rodgers actually have COVID toe?”, Rodgers said the COVID toe line with a bit of a smirk, and Florio wrote “We thought he was joking.” Beyond that, chilblains are a skin condition, and Rodgers told McAfee he was dealing with a bone issue, so the symptoms didn’t seem to quite line up. And interpreting Rodgers’ comments has gone awry in the past, as with his claims that he meant something totally different by “I’m immunized” than what everyone thought he meant.

That link, of Rodgers’ past comments to McAfee after it came out that he was not vaccinated, also indicates how upset Rodgers was over having his vaccination status disclosed. So there’s at least an argument that media shouldn’t have expected him to fully discuss what was going on with his toe. The initial phrasing of the Wall Street Journal piece was also perhaps overly strong given the information they had; Beaton’s initial story included “Rodgers confirmed what dermatologists had previously suspected” rather than just “Rodgers said ‘I have COVID toe.'”

However, Rodgers’ “disinformation” rant here also seems like an overreach, especially with him particularly singling out someone who didn’t write the story in question. He literally said “I have COVID toe,” and “COVID toe” is a thing, even if he didn’t know that. It’s certainly not 100 percent clear from his tone or expression that he was joking about his toe issue being related to COVID. And the paper printed what he said. Their error was in assuming that he was using a medical term correctly and non-sarcastically, and they can be certainly be criticized for that, but that’s not really a “disinformation” campaign from them against Rodgers. If anything, it’s them being too credulous in believing what Rodgers said.

The real takeaway from this going forward is that media should be extremely careful in covering Rodgers. This marks the second case, following “I’m immunized,” where he’s said one thing, then later said he meant something by it that’s quite different than the way many would (and did) interpret those remarks. He can do that if he wishes. But this case is a good warning not to draw conclusions of any sort based on what Rodgers says.