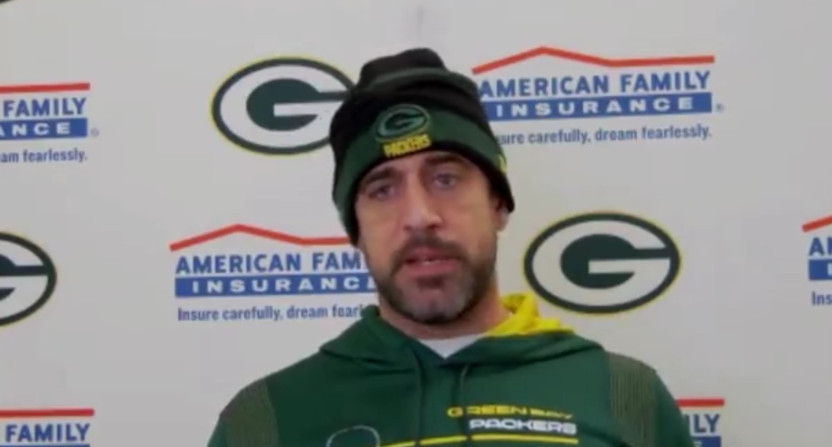 On Tuesday, Pro Football Weekly executive editor and SiriusXM sideline reporter Hub Arkush made headlines for revealing in an appearance on 670 The Score Chicago (with Danny Parkins and Matt Spiegel) that he wouldn’t pick Green Packers’ quarterback Aaron Rodgers on his NFL MVP ballot. Arkush said things like “I don’t think you can be the biggest jerk in the league and punish your team, and your organization and your fan base the way he did and be the Most Valuable Player.” On Wednesday, Rodgers responded with shots at Arkush in a press conference:

A transcription of that, via Myles Simmons at Yahoo:

“I think he’s a bum. I think he’s an absolute bum,” Rodgers said. “He doesn’t know me. I don’t know who he is. No one knew who he was, probably, until yesterday’s comments. And I listened to the comments. But to say he had his mind made up in the summertime, in the offseason that I had zero chance of winning MVP — in my opinion, that should exclude [him from] future votes.

“His problem isn’t with me being a ‘bad guy’ or ‘the biggest jerk in the league’ — because he doesn’t know me. He doesn’t know anything about me. I’ve never met him. I’ve never had lunch with him. I’ve never had an interview with him. His problem is I’m not vaccinated. So if he wants to go on a crusade and collude and come up with an extra letter to put on the award just for this season and make it the ‘Most Valuable Vaccinated Player,’ then he should do that.

“But he’s a bum. And I’m not going to waste any time worrying about that stuff. He has no idea who I am. He’s never talked to me in his life. But it’s unfortunate that those sentiments — it’s surprising that he would even say that, to be honest. But I knew this was possible. I talked about it on McAfee weeks ago. But…crazy.”

Rodgers did mention in one of his regular appearances on the Pat McAfee Show that he figured he’d be “canceled” for lying about his vaccination status. But the reality has been different, as the vast majority of criticism has been directed at Arkush after he shared why he disqualified Rodgers from his MVP vote.

What’s interesting about this is, as Simmons notes, the consequences here really aren’t for Rodgers. It’s highly probable that Rodgers will win the AP NFL MVP award despite Arkush not voting for him. That’s an award that’s often gone to quarterbacks, with 38 of the 57 undisputed winners being quarterbacks, and Rodgers’ stats (3,977 passing yards with 35 touchdowns, four interceptions, and a 69 percent completion rate) seem to stand above any other quarterback. It’s notable that two of the other candidates Arkush mentioned (Jonathan Taylor and Cooper Kupp) are not quarterbacks. And while each of those players has their own case, the history of the AP vote suggests Rodgers will be selected for the second-straight year, and that Arkush’s vote here will be a minor dissent. The only real impact from this is from other media members, and then Rodgers himself, criticizing Arkush.

It’s also notable that Rodgers goes with the “he doesn’t know anything about me” defense, and the claim that “no one knew who he was” (which is incredibly inaccurate; those who have paid any attention to the NFL in the last decades know who Arkush is). It’s hard to see how “knowing anything about” a candidate matters to a MVP vote; that vote certainly shouldn’t be about interviews or close relationships with a particular player.

It certainly makes sense that Rodgers would prefer for unchallenging sycophants to hold these votes, but that doesn’t really matter in this case; Rodgers seems likely to win anyway. And while there is an on-field dimension to Rodgers’ decision not to get vaccinated (he missed a game after testing positive for COVID-19; yes, that could have happened with a breakthrough case even after vaccination and booster shots, but the odds are less likely with vaccines and boosters), that on-field dimension doesn’t seem enough to disrupt the general vote here. Rodgers is still likely to win this award, again. And at the moment, it looks like all that Arkush’s revelation of his own vote has accomplished is a wave of criticism for him, including from Rodgers’ bully pulpit.

It’s funny that Rodgers cares enough about this award to spend his time ranting about “absolute bum” Arkesh. The vast majority of Rodgers’ comments this year, particularly on Pat McAfee’s show, have been about how he doesn’t care about what anyone thinks of him. He’s done his own Joe Rogan-guided research, and determined that he’s smarter than the majority of doctors and experts out there. And he’s used that to even coopt medical terminology, and then complain that those who take him at his word shouldn’t have done so (while misidentifying who wrote the piece in question).The coherent logic for Rodgers would be to say “I don’t care what the voters say, I think I was the most valuable player this year.” But instead, he’s ranting about one dissenting voter who probably won’t affect the total. And he’s again using his own status to punch down at less prominent people.

Update: Arkush apologized on-air and in print for revealing why he wouldn’t vote for Rodgers, but not for his reasoning.