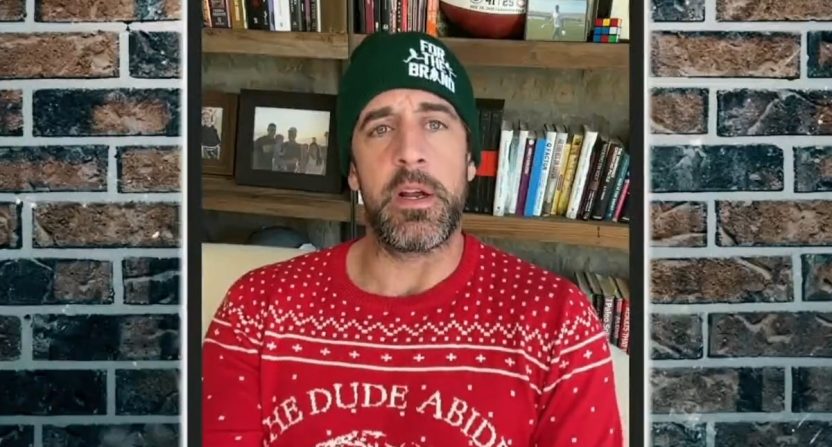 It’s not an official Aaron Rodgers appearance on The Pat McAfee Show until the Green Bay Packers quarterback blasts a media report.

Last week, The Athletic published a story from Kalyn Kahler which alleged the Packers and their rookie wide receivers have struggled to produce on offense this season in part because Rodgers uses too many hand signals which his teammates haven’t mastered yet.

They wrote A LOT about your hand signals Aaron.

"That was by far the dumbest article of the season" ~@AaronRodgers12

“Let me tell you, I was made aware of that article,” Rodgers said during his Tuesday appearance with Pat McAfee. “It is by far the dumbest nothingburger article that I’ve read the entire season. I won’t say in my career because last year there was some of the dumbest articles you could possibly imagine. I don’t know if you can ever top the COVID toe Wall Street Journal article. But this was the dumbest article of the year, by far.”

The article Rodgers referenced is The Wall Street Journal report from last year, which alleged the quarterback wasn’t suffering from a fractured toe, he was suffering from COVID toe, a condition that can cause a person to have swollen or discolored toes. Rodgers is infamously against the COVID vaccine and tested positive for COVID-19 during the season last year. Reports of COVID toe prompted Rodgers to show off his toe during a Zoom press conference last year to prove he wasn’t suffering from the condition.

During his Tuesday interview with McAfee, Rodgers noted his Twitter profile picture remains the image of him showing off his toe to the media, “unless it’s gotten taken down for some reason by Elon [Musk], or if members of the FBI are trying to censor me.”

While The Athletic article in question didn’t make any guesses about Rodgers’ medical condition, it did allege that the quarterback’s massive library of hand signals has hindered his team’s offense this season. One of the strongest claims in the story is that Rodgers quizzes his wide receivers on the signs, but there’s no Dewey Decimal sort of system that allows the young players to search and study his library of hand signals.

“95 percent of that article was absolute complete horsesh*t and the other five percent is exaggerated nothingness,” Rodgers ranted. “There was something about that it’s not written or stored anywhere, there’s not a file. Bullshit.”

Much like Rodgers proved he didn’t have COVID toe by showing off his toe last year, he should prove this report from The Athletic is false by sharing the hand signal database. Pics or it didn’t happen.

“That is literally one of the dumbest stories that I’ve read since the Wall Street Journal story,” Rodgers reiterated without proof. “Which is saying a lot.”

It’s worth mentioning, The Athletic’s article was published three days before Packers wide receiver Christian Watson curiously missed a hand signal from Rodgers and ran the wrong route at the goal line during Monday Night Football.