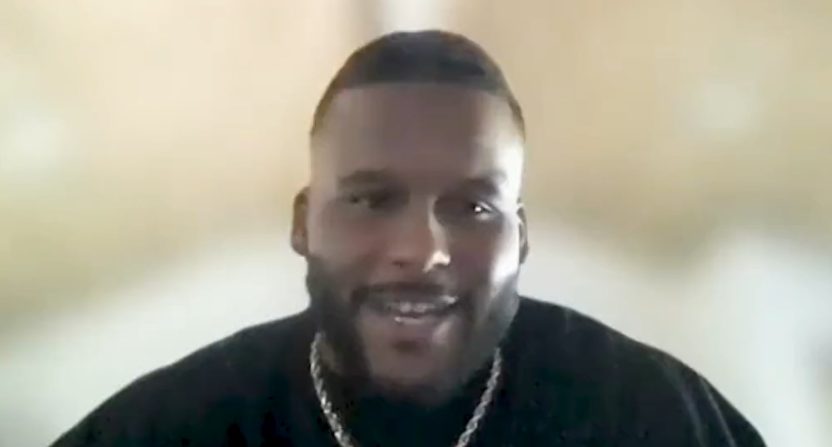 Less than one week after Aaron Donald made negative national headlines, the defensive end and his P.R. rep appear intent on flipping the narrative from swinging helmets to Dr. Teal’s Epsom Salt Soaks.

Donald conducted a media tour on Wednesday to promote his partnership with Dr. Teal’s, and one of his stops was with CBS Sports Radio host Zach Gelb. Expectedly, Gelb asked Donald about the helmet swinging incident that sparked widespread debate about a potential suspension and even garnered accusations of “assault” in recent days. Donald and his P.R. person, however, seemed as though they were caught off guard by the seemingly obvious questions.

“What happened last week in joint practices,” asked Gelb. “Because we all saw the video of you swinging helmets? And people were wondering what was going on there?”

“It was just a practice,” Donald answered. “Obviously, people got phones out and things like that. But I’m not gonna sit and talk about negative stuff that happened at a practice. My main focus is Buffalo.”

“Was there any internal punishment?” Gelb pressed.

Gelb asked if Donald thought he was going to be suspended, a question many NFL analysts and media members debated last week, even though the incident occurred in practice, a setting the league does not monitor for behavior.

“Were you thinking maybe you were going to get suspended or anything?” Gelb asked, prompting Donald’s P.R. rep to interject.

“Hey Zach, we’re just gonna focus just here because Aaron’s here today to talk about Dr. Teal’s,” the P.R. person said. “So you do have two minutes left, if you want to pivot to your last question please.”

To Gelb’s credit, he stuck to the only topic his audience cared about and politely asked Donald what sparked the swinging helmet incident. Donald, however, disregarded the question and responded by awkwardly offering a prepared soliloquy about the product he intended to promote.

According to Gelb, he was not asked to avoid discussing the helmet incident prior to their on-air conversation, with the radio host admitting he would not have taken the interview with Donald had that request been made.

Promotional interviews like Donald’s are not uncommon in sports media. This week, former Tampa Bay Buccaneers coach Bruce Arians was on a media tour that included a stop with Stephen A. Smith on First Take to promote his partnership with pharmaceutical company Novartis for their Coaching Cholesterol campaign. Earlier in the NFL offseason, Tom Brady joined Dan Patrick for an interview under the condition that the quarterback would have the opportunity to promote his partnership with Hertz.

But there is a mutual understanding that the host will get to ask questions meant to entertain the listening audience despite being unrelated to whatever the player is promoting. Strangely, Donald and his P.R. team seemed caught off guard when those questions from Gelb were about the national story of the defensive lineman swinging his helmet at opposing players in practice.