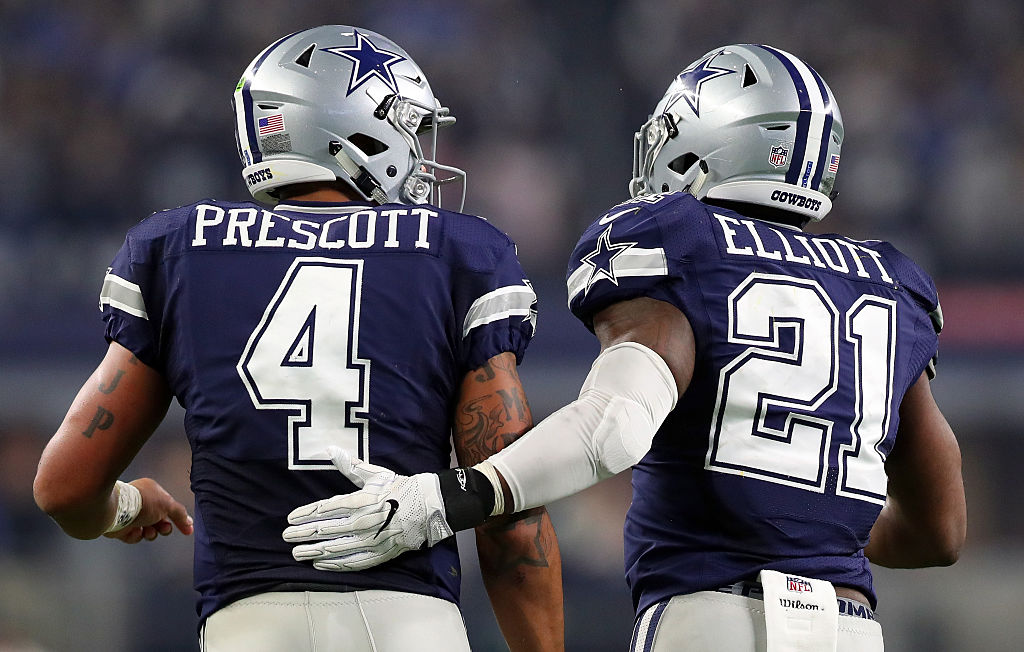 Off and on since Election Day two months ago, the NFL and some sports industry insiders have been pushing the post-election ratings rebound narrative as much as possible. And while there are some legitimate reasons for the league and its partners to be pleased with how the ratings have recovered from the malaise of the first half of the season, there is certainly much more to the story than just saying America came back to football after a divisive election campaign.

It’s not enough to merely say that the presidential campaign impacted the ratings when the majority of games aren’t shown directly against any debates, town halls, interviews of major candidates, or the actual coverage of the voting returns. It’s also not enough to state that the NFL takes one on the chin every four years since there’s been ratings erosion in between these last two election cycles.

Now that the 2016 regular season has faded to into the playoffs, it’s become even clearer how the fortunes have somewhat turned. It wasn’t the election as much as it was just the league’s schedule taking its normal course. Below are snapshots of how games for the collective of major broadcasters – FOX, CBS, NBC and ESPN – have performed before and after Election Day since 2007. You’ll be able to see not only how viewership has gone for three presidential elections, but for two midterm elections and five non-national election seasons.

As was the case in November when examining ratings through Week 8 of the season, this analysis excludes games shown on the NFL Network, which aired games exclusive to the network until 2014. Because of NFLN’s carriage issues through the years, Thursday Night Football games reached far fewer viewers until the network partnered with CBS in 2014 and NBC this season to broadcast games nationally. Thanks to some unique holiday scheduling, however, NFLN did reach an impressive milestone for the Baltimore Ravens/Pittsburgh Steelers tilt on Christmas Day. 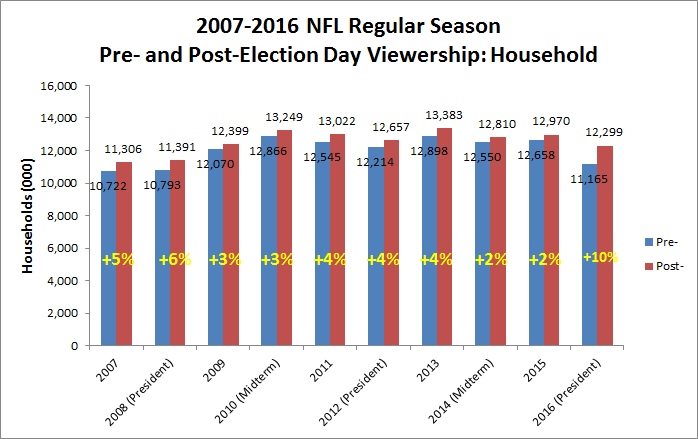 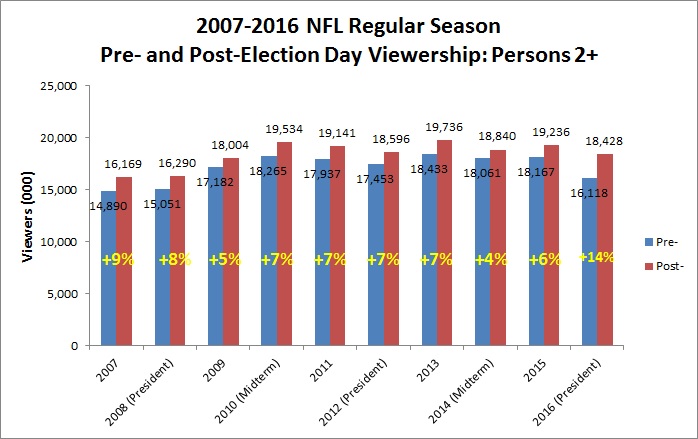 When it comes to TV households and the totality of all viewers, there was a post-Election Day lift for the NFL… as there has always been a lift every single season after that marker. This year with all persons, viewership of the average game among the major broadcasters rose by 14% after the November elections, the largest in-season increase since 2007 where the post-Election Day viewership rose by 9%. Comparatively speaking, there was an in-season rise of 8% in 2008 and 7% in 2012. Standing alone, those individual numbers are great for the league until comparing to the prior seasons.

And about where this season was trending before America blew a 3-1 lead on Election Night, the NFL should be glad that the post-election games pulled in the total viewer ratings they did. Versus the same period in 2015, average broadcasts were down 11% in viewership: 16.12 million this year versus 18.17 million in 2015, a loss of over 2 million viewers for the average game on the major broadcasters. That’s almost four times the decrease from the previous Presidential election season (2012 vs. 2011 was down 3%).

Digging into the two major advertising selling demos of adults aged 18-49 and aged 25-54, there are interesting contrasts to the Election Day theory. 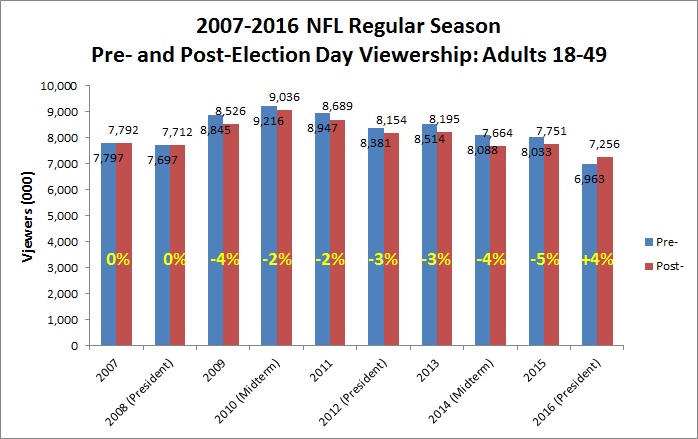 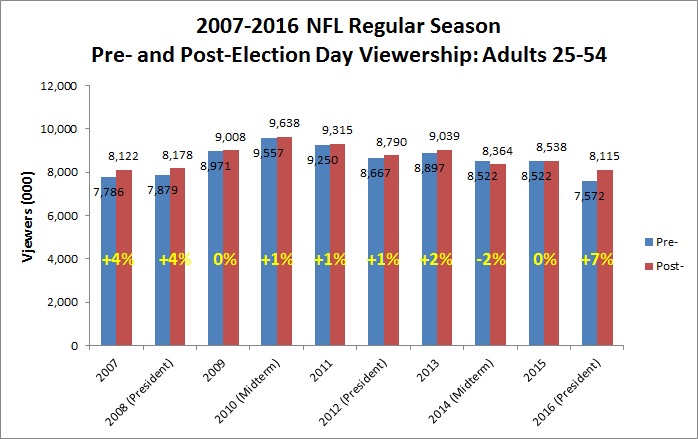 For instance, between 2007 and 2008, there’s virtually no change among the group of measured networks with the 18-49 demo, while the 4% post-election rise is the same in both years with the 25-54 break. Yet while post-election changes for are relatively flat for the next seven seasons (2009-2015) with adults 25-54, there are actually noticeable declines with adults 18-49 for the network group in five of the same seven seasons. In fact, not only did declines widen by a percentage point each year from 2013 to 2015, but the only increase after Election Day in the last ten seasons took place in 2016. Even with the 4% post-election increase this year for adults 18-49, the viewership prior to and after the election are the lowest since 2008. On both sides of the day for the 25-54 group, viewership was at its lowest since 2007.

So what does that mean? For starters, it further adds to concerns that younger viewers continue to move away from watching NFL games, at least on linear television where the dollars are truly made. Whether watching a game on an illegal stream, through social media chatter or on Twitter itself, those on the younger end of the 18-49 spectrum may rely on other options to watch games, if they even choose to do so. Certainly they could have taken in more election coverage, but for all we know, they just as well could have been binging on the Marvel shows on Netflix.

(Yet, let’s be honest here, if anyone chose watching election coverage on the cable news networks over Sunday afternoon NFL games that make up the majority of the schedule, they were either the most casual followers of sports or they were 49ers, Browns, Rams, or Jaguars fans who just wanted a new way to torture themselves.)

There is also no question that despite wide swaths of mediocrity throughout the league, the NFL was certainly helped by some key broadcasts in the second half of the season. The Dallas Cowboys being a legitimate Super Bowl contender for the first time in eons was a big boost to an otherwise stale season. In fact, NBC – which usually features the Cowboys multiple times in a season – showed three consecutive games with the NFC’s #1 seed in December alone. Competitive Thanksgiving games and a staggered Christmas weekend schedule also helped improve viewership versus the first half of the season.

None of this is to say that the election didn’t have any effect on the ratings, but it is to say that the impact is grossly overstated. It had already been a relatively tough year for the NFL compared to past seasons and as discussed before Election Day, things had been trending downward for longer than perceived. However, after this troublesome election season, it should thank its lucky stars – or rather, Dallas’ navy blue stars – that the Cowboys are proudly wearing the “America’s Team” label again.