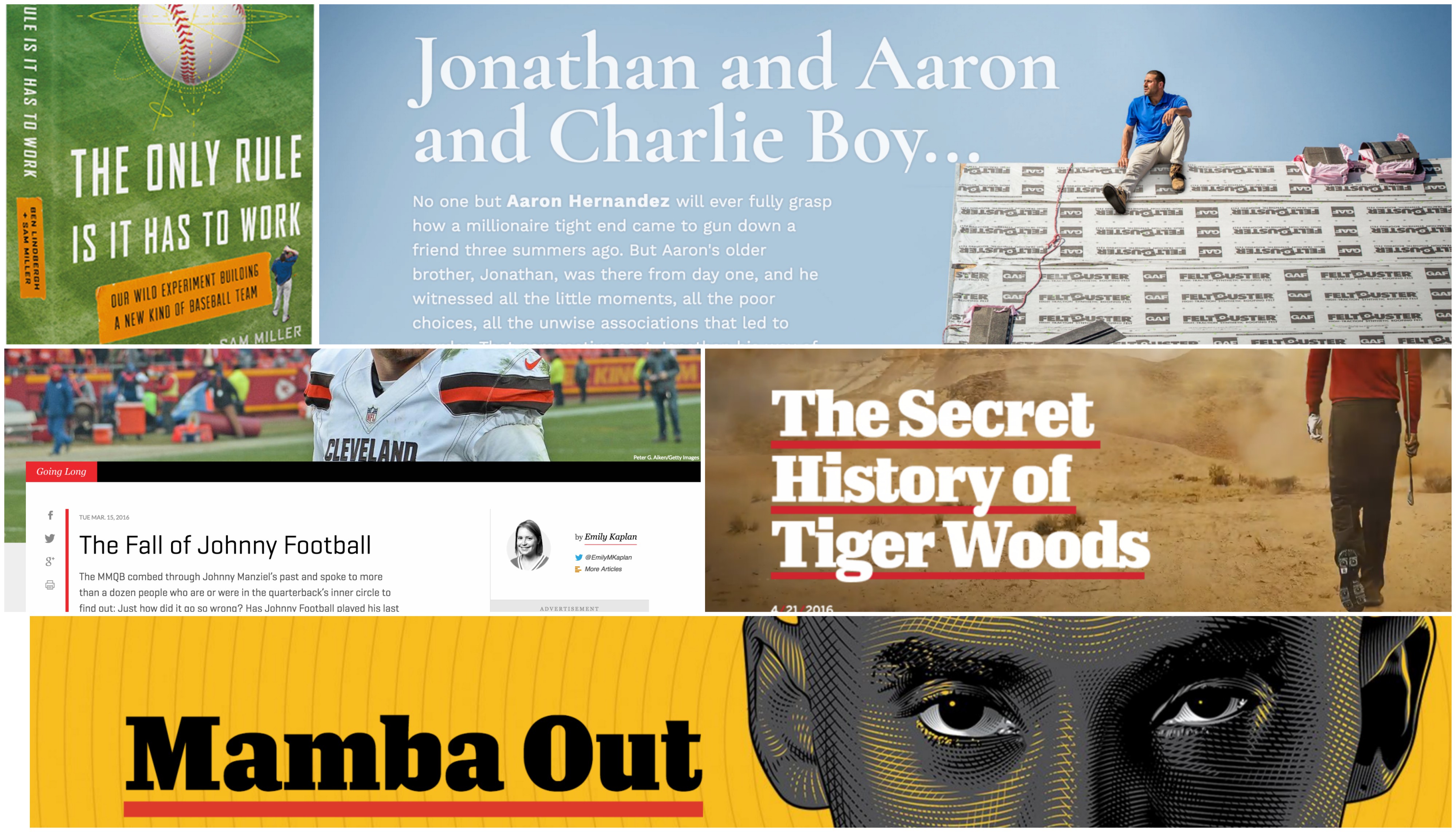 Say what you will about 2016, it gave us plenty to read, including a lot of great sports stories.

Last month, we reviewed the best sportswriting from the past 30 days. This time, to celebrate the end of the year, we’re going to look back over the past 365.

If you’ve got time to kill while you’re relaxing and celebrating the holidays, here are some recommendations of books and long-form articles about sports that you might want to check out.

I asked some fellow Awful Announcing writers for their favorite sports books published in 2016, before choosing my own.

Andrew Bucholtz: On the sportswriting front, the best sports book I’ve read this year is “Losing Isn’t Everything,” by Curt Menefee. It features fascinating interviews with those on the wrong side of some big sports moments, talking both about those moments and how they’ve affected them over the years. The Jean van de Velde interview really stands out.

Joe Lucia: I read a ton. Probably too much, given that I have roughly eight physical books unread, three more coming today, and about 20 on my Kindle that I still need to dig into. My favorite new book that I’ve read this year was “The Turbulent World Of Middle East Soccer,” by James Dorsey, which was a deep dive into politics and religion in the Middle East and North Africa, and how soccer plays a surprisingly large role in the region’s ongoing culture battles. It’s fascinating, and makes you realize how minimal of a role sports actually have in America.

Jay Rigdon: My favorite of the year was “The Only Rule Is It Has To Work,” by Ben Lindbergh and Sam Miller, detailing their year in charge of an independent-league baseball team in California. It’s one of the best sports books I’ve ever read, and was the best book I read in 2016.

Alex Putterman: I also loved “The Only Rule Is It Has to Work,” but my favorite sports book of the year was “Indentured: The Inside Story of the Rebellion Against the NCAA,” by Joe Nocera and Ben Strauss. This book provided a deep and provocative look at the history of the NCAA as well as the people seeking to take it down and taught me a ton about the context of today’s battle over college-athlete rights.

These are my favorite sports stories of 2016, best I can remember at least. This is just one man’s opinion, and there were dozens of other pieces I could have chosen, so apologies if I missed or forgot your favorite.

An important and touching story with implications well beyond sports. Maybe my favorite 2016 sports story of all.

Dusty Baker survived ruin and humiliation. With the Nationals, can he go out on top? Dave Sheinin, Washington Post

Dusty Baker is a more compelling character than anyone seems to realize, and Sheinin brings out all his layers here.

The fall of Johnny Football, Emily Kaplan, The MMQB

Johnny Manziel’s behavior often seems beyond understanding. Here, Kaplan makes sense of it all, as best anyone can.

Mamba out, Ramona Shelburne, ESPN and The Undefeated

This is as good a profile as you’ll find. A lot was written about Kobe Bryant’s retirement, but none of it was as thorough or revelatory.

The friendship that divides the NBA, Pablo Torre, ESPN

LeBron James and Dwyane Wade have a really adorable relationship, and Torre deftly gets out of the way and lets them (and Gabrielle Union) talk about it.

This piece is a haunting look at the collateral damage of Aaron Hernandez’s horrific crimes.

The Bennett brothers vs. everyone, Mina Kimes, ESPN

Unlike most of these stories, this one is fun and upbeat, driven by quotes from the NFL’s most dynamic brothers.

It’s tough to sum up A-Rod’s legacy in one essay, but Verducci hits all the major points and balances them in a way that is insightful without being overly judgmental.

How quarterbacks are made, Robert Klemko, The MMQB

Klemko makes us confront us what we likely already know but don’t want to admit: Your chances of becoming an NFL QB depend hugely on your family background.

The Longest Run: Olympics about more than winning for Refugee team, by S.L. Price

The best piece I read about the Summer Olympics had nothing to do with Michael Phelps, Simone Biles or Usain Bolt.

Ballard takes an oft-told story—star player who falls into addiction—and makes it feel new and vital.